5) The Spread of the Gospel 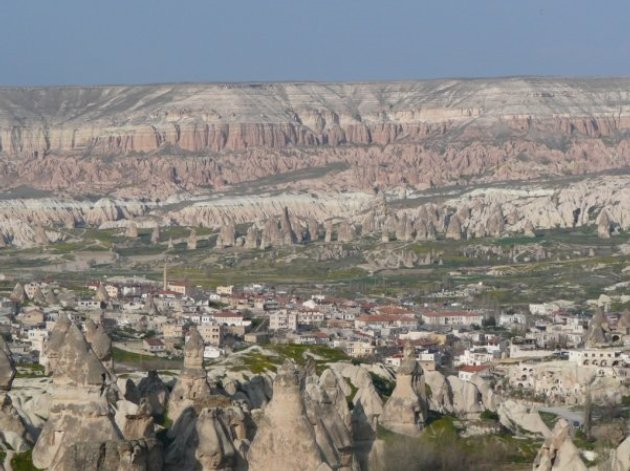 Cappadocia meaning "a place for fine horses" is mentioned in the New Testament:

"Peter, an apostle of Jesus Christ, To the pilgrims of the Dispersion in Pontus, Galatia, Cappadocia, Asia, and Bithynia." (1 Peter 1:1) 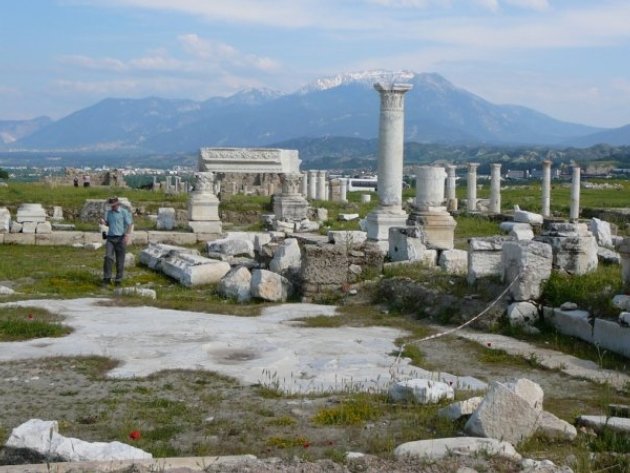 For I would that ye knew what great conflict I have for you, and for them at Laodicea, and for as many as have not seen my face in the flesh; (Col 2:1) 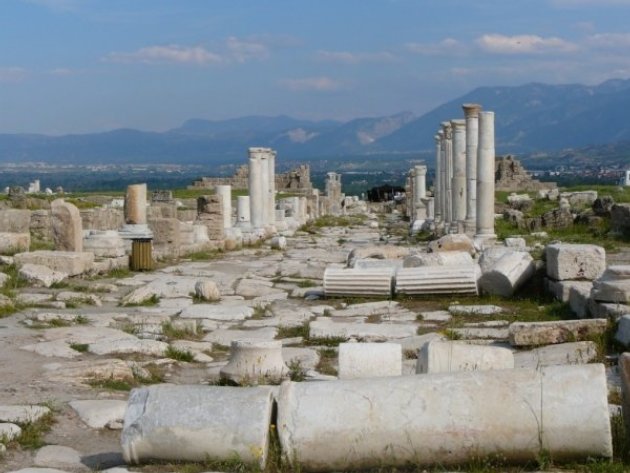 Laodicea ruins of the ancient city.

Epaphras, who is one of you, a servant of Christ, saluteth you, always labouring fervently for you in prayers, that ye may stand perfect and complete in all the will of God. For I bear him record, that he hath a great zeal for you, and them that are in Laodicea, and them in Hierapolis. (Col 4:12-13) 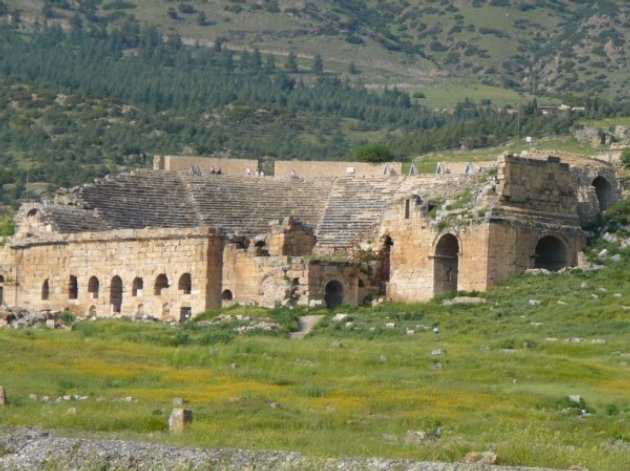 Hierapolis. The Theatre. Paul mentiones the people here in Colossians 4. 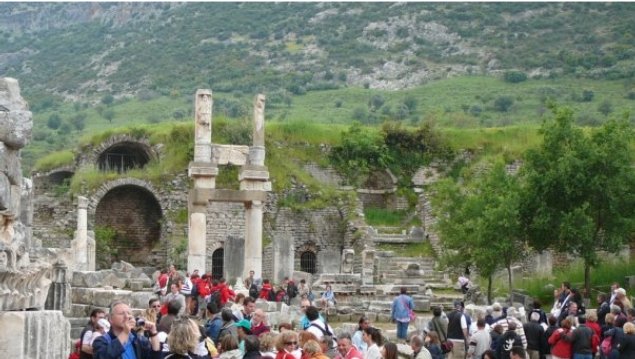 Ephesus â Domitian Square. Domitian Temple gave this area its name. It was the first temple to be built in the name of an emperor (81 - 96A.D.) and located next to the Domitian Square in the background. 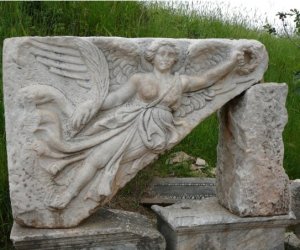 Ephesus â the Flying NIKE. Nike = âVictoryâ. This relief of the flying Nike in the Domitian Square is thought to also be a part of the Hercules gate.

Unto..Ephesus write..I know thy works, and thy labour, and thy patience, and how thou canst not bear them which are evil: and thou hast tried them which say they are apostles, and are not, and hast found them liars: And hast borne, and hast patience, and for my name's sake hast laboured, and hast not fainted. Nevertheless I have somewhat against thee, because thou hast left thy first love. Remember therefore from whence thou art fallen, and repent, and do the first works; or else I will come unto thee quickly, and will remove thy candlestick out of his place, except thou repent. But this thou hast, that thou hatest the deeds of the Nicolaitans, which I also hate. (Rev 2:1-6) 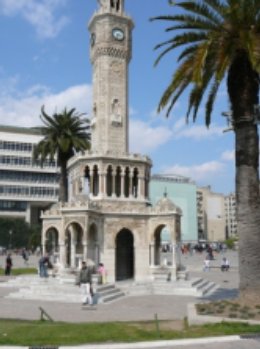 And unto the angel of the congregation in Smyrna write; These things saith the first and the last, which was dead, and is alive; I know thy works, and tribulation, and poverty, (but thou art rich) and I know the blasphemy of them which say they are Jews, and are not, but are the synagogue of the adversary. (Rev 2:8-9) 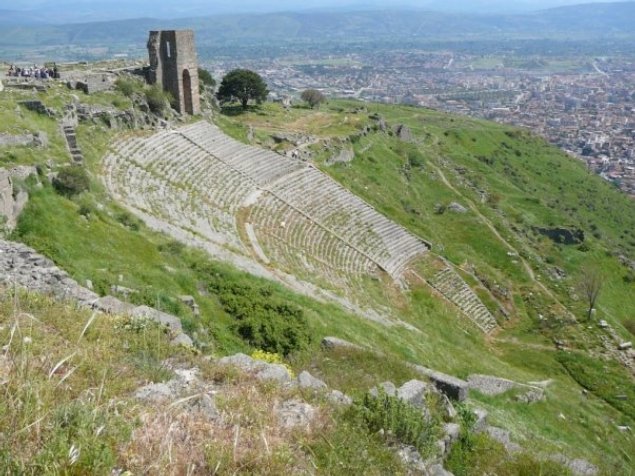 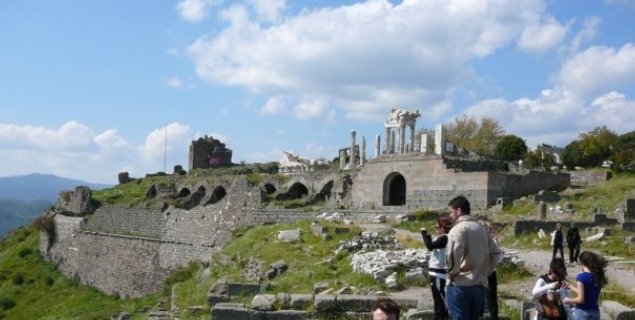 Pergamos. Temple to Trajan (ruled from 98AD to his death in 117AD) in background. 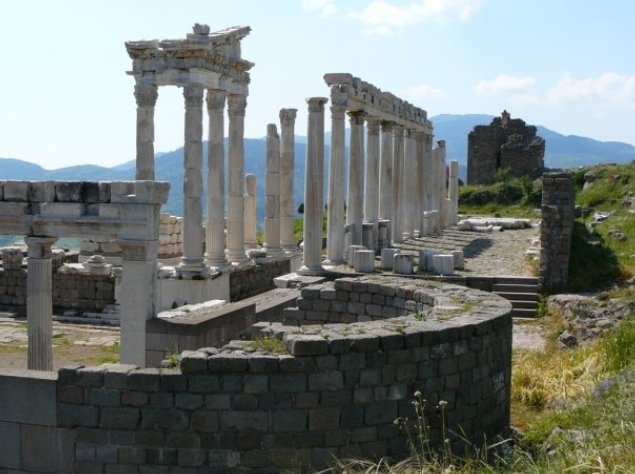 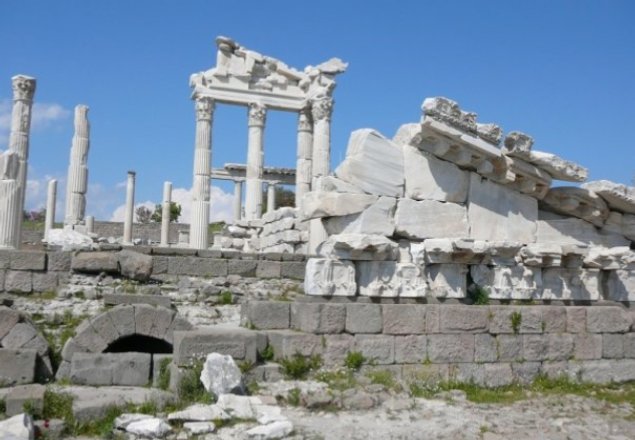 The city became a Roman city after 133BC when Attalus III (138-133 BC), without an heir, bequeathed Pergamon to Rome, to prevent civil war.

I know thy works, and where thou dwell, even where the Adversarys's seat is: and thou hold fast my name, and hast not denied my faith, even in those days wherein Antipas was my faithful martyr, who was slain among you, where the Adversary dwells. But I have a few things against thee, because thou hast there them that hold the doctrine of Balaam, who taught Balac to cast a stumblingblock before the children of Israel, to eat things sacrificed unto idols, and to commit fornication. So have thou also them that hold the doctrine of the Nicolaitans, which thing I hate. (Rev 2:13-15) 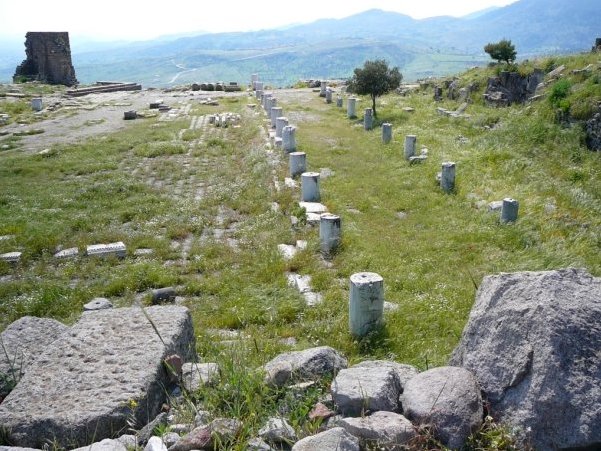 Pergamos, features a temple complex modelled on the Acropolis. Remains of Temple of Athena. 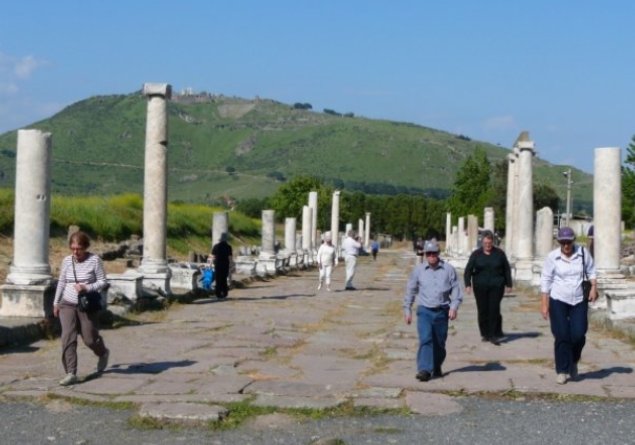 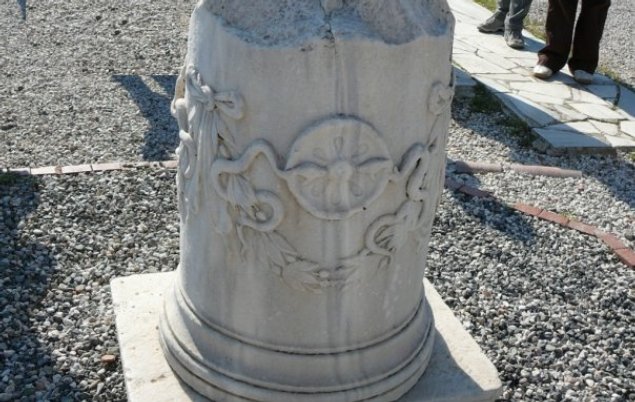 Pergamos (Bergama) â the Asklepieion. Two serpents used as symbols of healing; since serpents shed their skin to renew itself â a symbol of a new life. 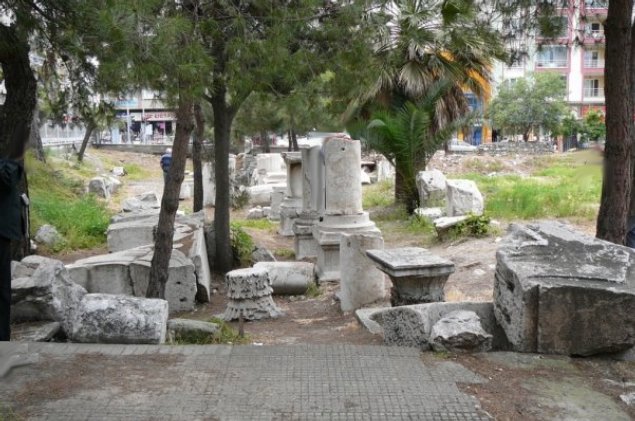 And on the sabbath we went out of the city by a river side, where prayer was wont to be made; and we sat down, and spake unto the women which resorted there. And a certain woman named Lydia, a seller of purple, of the city of Thyatira, which worshipped God, heard us: whose heart the Lord opened, that she attended unto the things which were spoken of Paul. And when she was baptized, and her household, she besought us, saying, If ye have judged me to be faithful to the Lord, come into my house, and abide there. And she constrained us. (Acts 16:13-15) 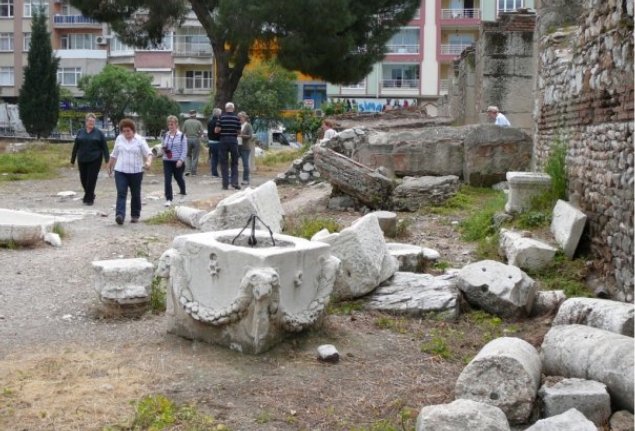 Thyatira ruins in the modern city

And unto.. Thyatira write; These things says the Son of God,.. I know thy works, and charity, and service, and faith, and thy patience, and thy works; and the last to be more than the first. Notwithstanding I have a few things against thee, because thou sufferest that woman Jezebel, which calleth herself a prophetess, to teach and to seduce my servants to commit fornication, and to eat things sacrificed unto idols. And I gave her space to repent of her fornication; and she repented not. Behold, I will cast her..and them that commit adultery with her into great tribulation, except they repent of their deeds. And I will kill her children with death; and all the congregations shall know that I am he which searcheth the minds and hearts: and I will give unto every one of you according to your works. But unto you I say, and unto the rest in Thyatira, as many as have not this doctrine, and which have not known the depths of the adversary, as they speak; I will put upon you none other burden. But that which ye have already hold fast till I come. (Revelations 2:18-25) 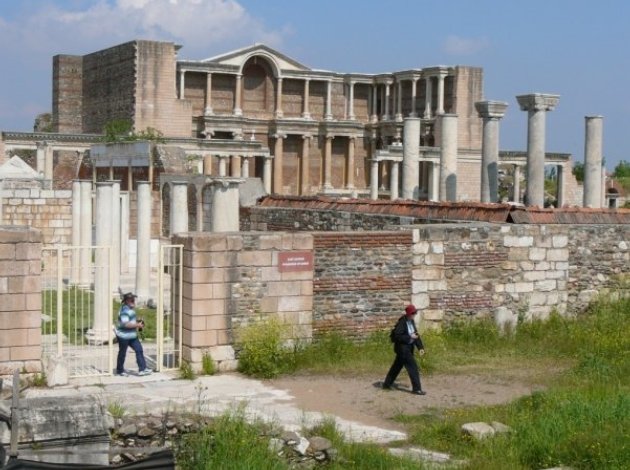 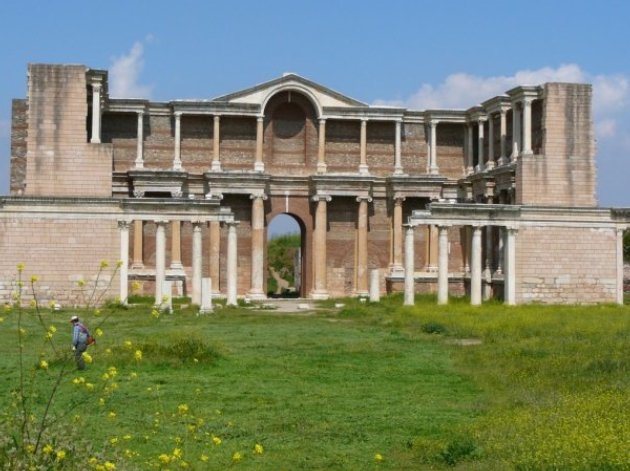 And unto the angel of the congregation in Sardis write; These things saith he that hath the seven Spirits of God, and the seven stars; I know thy works, that thou hast a name that thou livest, and art dead. Be watchful, and strengthen the things which remain, that are ready to die: for I have not found thy works perfect before God. (Rev 3:1-2) 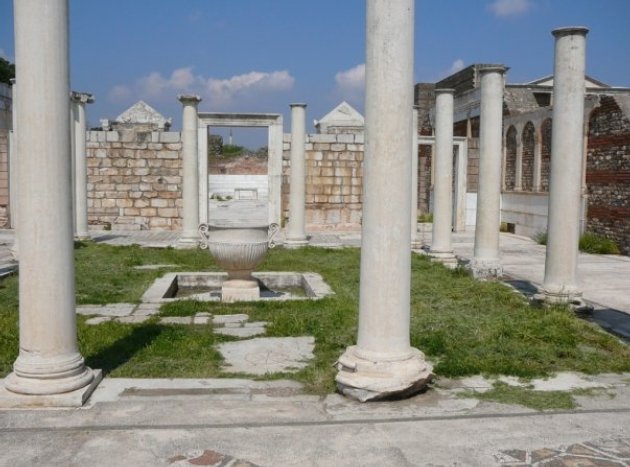 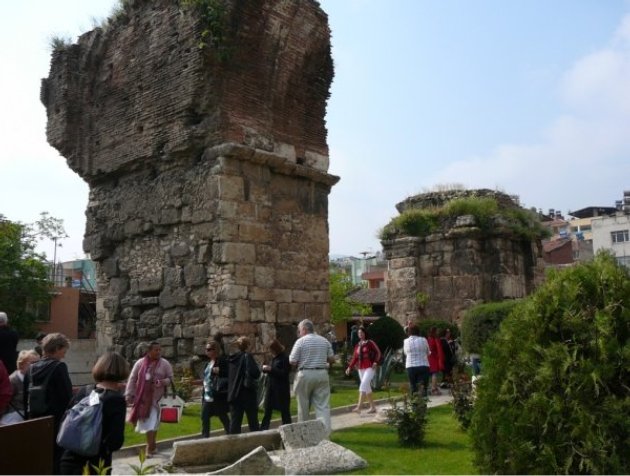 Philadelphia. Remains of a church built in 600AD.

And to the angel of the congregation in Philadelphia write; These things saith he that is holy, he that is true, he that hath the key of David, he that openeth, and no man shutteth; and shutteth, and no man openeth; I know thy works: behold, I have set before thee an open door, and no man can shut it: for thou hast a little strength, and hast kept my word, and hast not denied my name. (Rev 3:7-8) 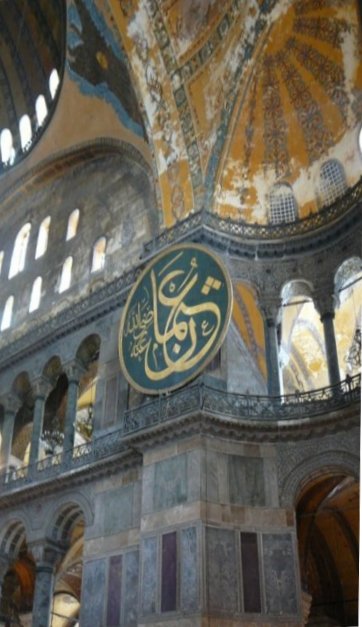 February 23, 532 Emperor Justinian I decided to build Hagia Sophia. Built in a classical Romansque style the Building was emblematic of the power of the Roman Church. As was its history of rebuilding through earthquake and fire, attack by Latin Catholics of the 4th Crusade and the takeover in 1453 when it was conquered by the Ottoman Turks. The building's conversion into a mosque was gradual, many of the mosaics were covered with plaster over time until the 17th century where travellers note still saw Byzantine images. Minarets were added in 1577 and it became a Islamic social centre in 1740. In 1847 and 1849 the large discs were hung from the columns, completing the transfomation.

And the woman fled into the wilderness, where she has a place prepared of God, that they should feed her there a thousand two hundred and sixty days. (Rev 12:6)