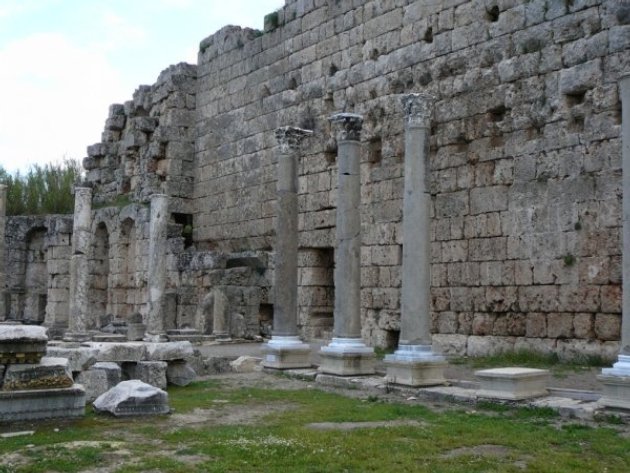 Now when Paul and his company loosed from Paphos, they came to Perga in Pamphylia: and John departing from them returned to Jerusalem. But when they departed from Perga, they came to Antioch in Pisidia, and went into the synagogue on the sabbath day, and sat down. (Acts 13:13-14)

And after they had passed throughout Pisidia, they came to Pamphylia. And when they had preached the word in Perga, they went down into Attalia: (Acts 14:24-25) 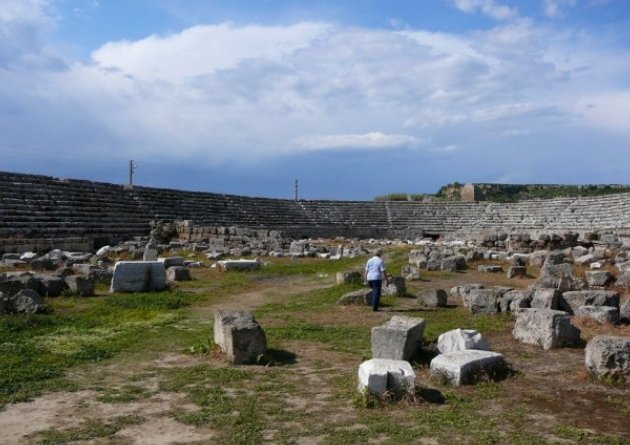 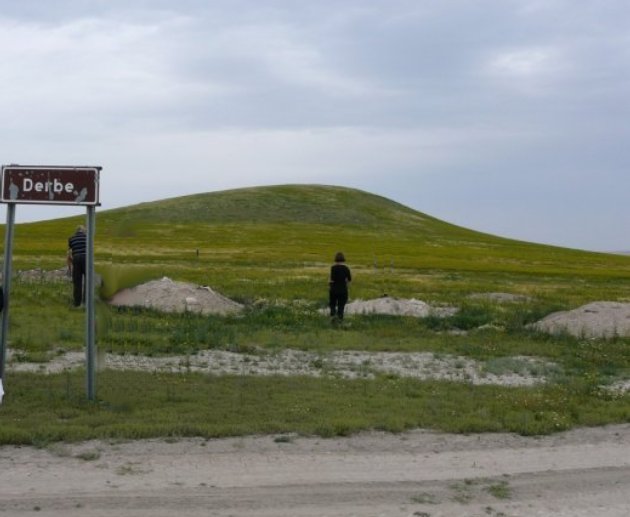 Derbe. The Apostle Paul fled here from Lystra after being stoned.

Howbeit, as the disciples stood round about him, he rose up, and came into the city: and the next day he departed with Barnabas to Derbe. (Acts 14:20) 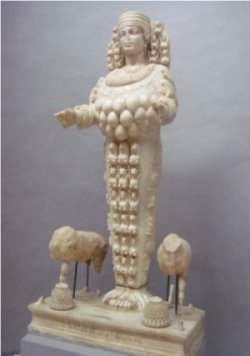 Ephesus was the centre of the worship of Artemis also known as Diana.

Due to varying and contradictory ledgends we cannot be too sure about what was belived, but it appears Diana was thought to be the daughter of Zeus. She was a Hellenic goddess of fertility, childbirth, forests, hills and the hunt.

For a certain man named Demetrius, a silversmith, which made silver shrines for Diana, brought no small gain unto the craftsmen; Whom he called together with the workmen of like occupation, and said, "Sirs, ye know that by this craft we have our wealth. Moreover you see and hear, that not alone at Ephesus, but almost throughout all Asia, this Paul hath persuaded and turned away much people, saying that they be no gods, which are made with hands: So that not only this our craft is in danger to be set at nought; but also that the temple of the great goddess Diana should be despised, and her magnificence should be destroyed, whom all Asia and the world worships". And when they heard these sayings, they were full of wrath, and cried out, saying, "Great is Diana of the Ephesians". (Acts 19:24-28) 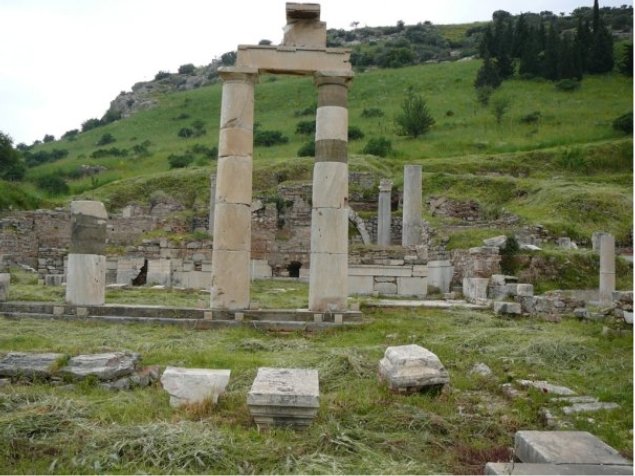 Ephesus. The Prytaneion 3rd Century BC, where religious ceremonies, official receptions and banquets were held. The sacred flame symbolizing the heart of Ephesus was kept constantly alight in the Prytaneion. 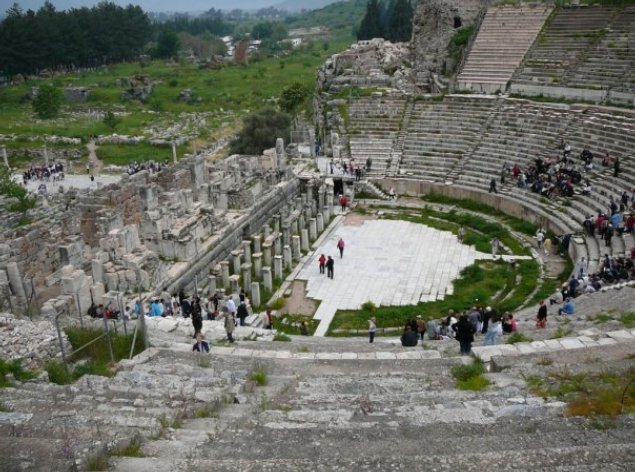 âAnd the whole city was filled with confusion: and having caught Gaius and Aristarchus, men of Macedonia, Paul's companions in travel, they rushed with one accord into the theatre.â (Acts 19:29) 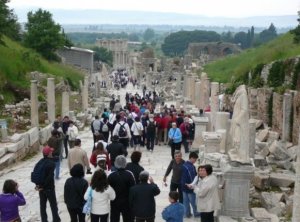 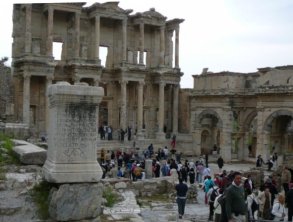 Left Ephesus â street of Curetes, looking towards Library of Celsus. There were 500,000 people in Ephesus at time of Paul the Apostle.

Right Ephesus â Library of Celsus. Ephesus was a university city like Athens. It abounded with orators and philosophers like Tyrannus (Acts 19v9). Library was built in 117 A.D. It was a monumental tomb for Gaius Julius Celsus Polemaeanus, the governor of the province of Asia; from his son Galius Julius Aquila. 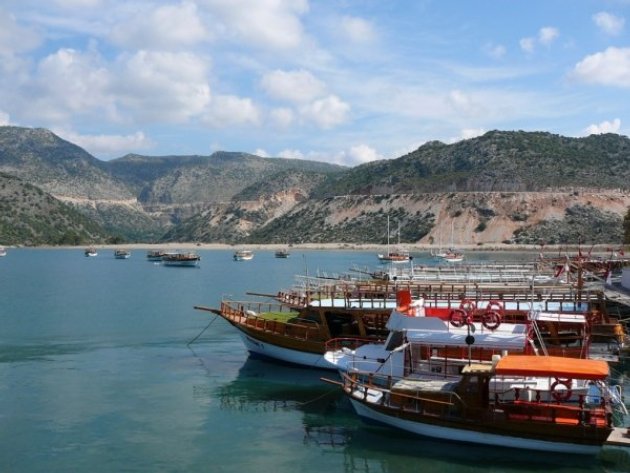 And when we had launched from thence, we sailed under Cyprus, because the winds were contrary. And when we had sailed over the sea of Cilicia and Pamphylia, we came to Myra, a city of Lycia. (Acts 27:4-5) 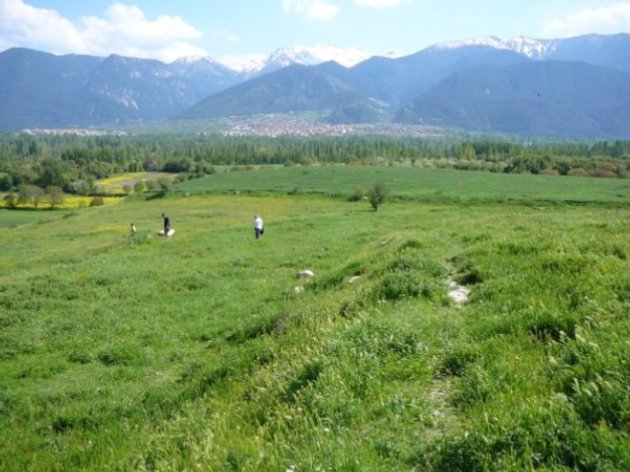 The salutation by the hand of me Paul. Remember my bonds. Grace be with you. Amen.