In Daniel 2, a prophecy is given that foretells the future from the time of Daniel to the present day. It deals with the rise and fall of nations and Empires, whose history is recorded in the history texts that are readily available to us. The prophecy has not yet been completely fulfilled and we today are in the privileged position of seeing the culmination of that prophecy.

We can prove the truth of what has been in the past and by faith should be able to have faith that what is still prophesied will come to pass.

This prophecy is a tool by which our faith and confidence can be consolidated. We need these foundations for faith and the Creator in his wisdom has provided prophecies together with explanations of their meaning. Daniel 2, in a few verses, outlines world history since the time of Daniel (6th century BC) to the present and predicts the future, which many of us will yet see. This has been for the benefit of the faithful of all ages since the time of Daniel,

Daniel, as a young Jewish lad, had been taken captive to Babylon by the forces of Nebuchadnezzar that had invaded Israel. Nebuchadnezzar was a powerful monarch who had subjected most of the middle eastern world, creating an Empire. Nebuchadnezzar was troubled by a dream. He asked the wise men of Babylon to tell him the dream and its meaning. He was in fact testing the abilities that they claimed to have. They failed to do this. Nebuchadnezzar was angry and he issued a royal decree that threatened them, including Daniel, with death if they did not reveal the dream and its meaning to him. The young man Daniel and his three young Jewish captive friends sought the Lord's assistance through prayer and supplication. Daniel's request was answered in Daniel 2.

You, O king, saw, and behold a great image. This great image, whose brightness was excellent, stood before thee; and the form thereof was terrible.
This image's head was of fine gold, his breast and his arms of silver, his belly and his thighs of brass, His legs of iron, his feet part of iron and part of clay. (Daniel 2: 31-33)

Nebuchadnezzar recognised the image as seen in his dream and Daniel proceeded to give the King its meaning. Daniel showed that the four different metals of the image represented four world powers, or Empires that would arise. The ten toes represented a number of loosely knit nations in a confederacy that would replace the fourth Empire. These were the Kingdoms of men. The stone, which smote the image and completely destroyed and supplanted it, represented the Kingdom of God which will be ultimately set up on earth and will overthrow the kingdom of men. The explanation of the dream, which is an outline of the history of the world up to the time of the end of man's rule on earth, is given in Daniel 2:37-44

You, O king, are a king of kings: for the God of heaven has given you a kingdom, power, and strength, and glory. And wheresoever the children of men dwell, the beasts of the field and the fowls of the heaven has he given into thine hand, and has made thee ruler over them all. Thou art this head of gold. (Babylonian Empire)
And after thee shall arise another kingdom inferior to thee (Persian), and another third kingdom of brass (Greek), which shall bear rule over all the earth.
And the fourth kingdom shall be strong as iron (Roman): forasmuch as iron breaks in pieces and subdues all things : and as iron that breaks all these, shall it break in pieces and bruise.
And whereas you saw the feet and toes, part of potters' clay, and part of iron, the kingdom shall be divided(Eastern and Western divisions of Roman Empire); but there shall be in it of the strength of the iron, forasmuch as thou saw the iron mixed with miry clay. And as the toes of the feet were part of iron, and part of clay, so the kingdom shall be partly strong, and partly broken. And whereas thou saw iron mixed with miry clay, they shall mingle themselves with the seed of men: but they shall not cleave one to another, even as iron is not mixed with clay (European nations).
And in the days of these kings shall the God of heaven set up a kingdom, which shall never be destroyed: and the kingdom shall not be left to other people, but it shall break in pieces and consume all these kingdoms, and it shall stand for ever. (Daniel 2:37-44.) 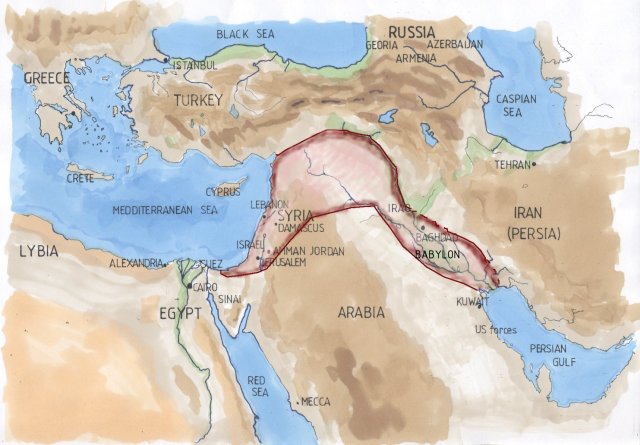 A century before Nebuchadnezzar's rise to power, Isaiah had made a prophecy related to Babylon.

And Babylon, the glory of kingdoms, the beauty of the Chaldees' excellency, shall be as when God overthrew Sodom and Gomorrah. It shall never be inhabited, neither shall it be dwelt in from generation to generation: neither shall the Arabian pitch tent there; neither shall the shepherds make their fold there.
But wild beasts of the desert shall lie there; and their houses shall be full of doleful creatures; and owls shall dwell there, and satyrs shall dance there. And the wild beasts of the islands shall cry in their desolate houses, and dragons in their pleasant palaces: and her time is near to come, and her days shall not be prolonged. (Isaiah 13:22)

The desolate ruin of Babylon, only discovered by archaeologists a little over a century ago, proves the truth of Isaiah's prophecy. Nebuchadnezzar rose to power in 606BC and the Babylonian Empire came to its end in 536BC when Cyrus of Persia conquered Babylon. The golden head was replaced by the breast and arms of the inferior metal silver.

Babylon had been conquered by the armies of Darius of Media and Cyrus of Persia and world power passed to the Kingdom of Media-Persia. Persia was inferior to the Babylonian Empire with regard to wealth and magnificence and the historian Herodotus claims that tax paid to the Persians was in silver. The Persian Empire continued for 203 years until it was superseded by the Empire of Greece in 333BC at the battle of Issus.

Greece was the kingdom of brass and what could have been a more appropriate symbol than brass. Greece has been noted for brass or copper, from which the armour of its soldiers was made. Alexander of Macedon extended his Grecian conquests throughout the ancient world. Following his early death at the age of thirty three during a drinking bout in Babylon, his Empire declined and was divided among his four Generals. These four divisions of the Grecian Empire were subsequently conquered by the new power which arose in the west, the Roman power.

The Roman power, again most suitably symbolised by “iron”, ruthless in its power to subject the then habitable world,conquered Gaul, Spain, Britain, Europe, Syria, Mesopotamia, Egypt and Israel. The Empire reached to the Rhine River. Rome was never conquered by another power. The legs of the image show the disintegration of the Empire into two parts, the Eastern Roman Empire with its capital in Constantinople and Western Roman Empire with its capital in Rome.