The feet of the image show a further change in the Roman influence. In the 5th century AD Barbarian hordes from the north invaded the Roman Empire and caused further disintegration of the empire, but not destruction. It was divided into factions and in time laid the foundations of what was to become what we now see as Europe. 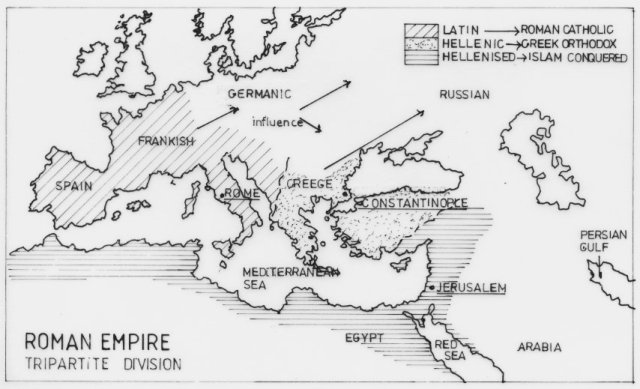 Roman Catholicism remained the dominant religion but the invaders created nationalistic and ethnic divisions in Europe. The Protestant movement of the 14th and 15th centuries also created religious differences. The mixture of iron and clay of the feet symbolised the divisions that arose out of these various influences that appeared over the centuries following the barbarian invasions of the 5th century.

Dear reader, this is where we stand as viewers and observers today in the 21st century.

We must be the most privileged people of any age. Daily, the news brings to us the development of what we see as the European Community, striving to achieve a form of cohesian and unity. Since 1957/8 there has been a concerted effort to create a united Europe, through trade, commerce and currency. There is also now the move towards EU government, arms and defence. We are witnessing events today that indicate that this image is about to stand on its feet. Despite all the efforts to create this world power, it will fail. When the united forces of Europe attempt to invade and destroy Israel, the Messiah will return to save Israel and establish God's Kingdom and justice on the earth for all mankind.

Jerusalem is described as a “burdensome stone” in Zechariah 12.

We can see this today as few nations recognise Israel's right to possession of Jerusalem as their ancient capital. The nations of the world now want to divide this tiny nation of Israel and Jerusalem. Inevitably a combined force of nations will invade Israel, but they will not prevail as the Messiah will return and save Israel. Daniel explained that this dream revealed this rise of the nations that would follow Nebuchadnezzar up until the time of the end of the kingdom of men. The stone cut out without hands would destroy all the elements of “the iron, the brass, the clay, the silver, and the gold”, which represented the great empires of man.

As you saw that the stone was cut out of the mountain without hands, and that it brake in pieces the iron, the brass, the clay, the silver, and the gold; the great God has made known to the king what shall come to pass hereafter: and the dream is certain,

and the interpretation thereof sure. (Daniel 2:45)

We have seen the past and this gives us a foundation for faith in the future hope shown to us through the prophetic word that the corrupt rule of mankind has a limited time in God's plan with this earth. We are witnessing the leaders of the nations and the leader of the Roman Catholic Church at the G8 Summit in L'Aquila in 2009 working to plan the dividing of Israel. This shows the world's concern over Israel and the Palestinians. It bears out Zechariah's prophecy that Jerusalem would become a “burdensome stone”. Following this there would be the nations' invasion of Israel, the return of the Messiah and a future world peace.

For those of us concerned with the state that our world is falling into of violence, immorality and political corruption, we can be assured that there will be a better future for all mankind. Daniel was shown by God the future and the Bible has shown us that will be an end to man's sorrows and sufferings.

If we understand God's message and believe, our faith will be strengthened. Isaiah gave us hope:

For since the beginning of the world men have not heard, nor perceived by the ear, neither has the eye seen, O God, beside thee, what he has prepared for him that waits for him. (Isaiah 64:4)

For further on Daniel