Yesterday, I relaxed and read the Jewish National Fund (KKL-JNF) The Negev Review. For some reason KKL-JNF also sent us a pocket calendar. The front cover stated the JNF had established 1,000 communities on KKL-JNF land and redeemed 12.5% of the total area of the State at 1948. Before calculating what percentage of the present state this was, I began to ponder why Jews had to buy it, to redeem it.

Perhaps an answer is exemplified in the account of the Temple Mount.

When King David conquered Jerusalem the Jebusite city to make it his capital, he didn't eradicate the Jebusites. They seem to have lived amongst the Jews and owned land. Certainly a certain Aravnah, or Ornan a Jebusite owned land and had a threshing floor for threshing grain. This Jebusite was not a Jew, as he clearly differentiates himself.

This was the situation when a plague comes to Jerusalem, and the destroying messenger, in mercy, halts at Aravnah's threshing floor. There King David is asked to build an altar to halt the plague. To King David and all the elders with him Aravnah in terror, as anyone would, offers to give his land and even some oxen and wood thrown in to comply with the Divine command. King David does something quite unexpected. He knows that he was standing on the land that was promised to the Fathers. He had conquered the whole city, any Jebusite was lucky to be alive let alone still in possession of land and in addition everyone, not just Aravnah the Jebusite, was in fear. In this situation, David says,

"No, I will buy them at the full price. I cannot make a present to the LORD of what belongs to you" (I Chronicles 21:24).

The site of the threshing floor was bought by David on behalf of the people, for their redemption, for 600 shekels' worth of gold, from a Jebusite. On that land was built an altar, and later Solomon's temple. 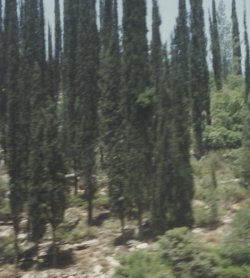 KKL-JNF speak of 'redeeming' the land, which is both buying it and turning it back from desolation. They have not been alone. Others have bought land in Eretz Yisrael and redeemed it.

Compare this situation to Britain. Recent findings suggest the Celts are Basque. Presumably the excess population in Spain took spear and shield and set out over the seas, finding much mostly vacant land. We know far more about the Angles and Saxons and they certainly didn't buy the land they settled. The present debate after recent genetic sampling is whether they absorbed or wiped out the previous population in the Anglo-Saxon heartland, or both.

The global European expansion tended to be by military conquest, with leadership being held by the conquerors, except in the case of some Commonwealth countries and America, where the scale of settlement and land occupation swamped the original inhabitants. Historically America in its expansion was an exception, in that they purchased Louisiana from France (1803) and Alaska from Russia (1867). But at that time Americans thought they had founded their promised land. If anything this reinforces the point that land purchase, or that land be not without a cost, is a special feature related to a 'holy' land.

Abraham was shown an occupied land and told it would be his everlasting possession (Genesis 17:8). But he bought land from Ephron the Hittite a place to bury the family, in Hebron (Genesis 23:10). It possibly remained a possession until the children returned and conquered Canaan, as the land that Jacob bought of the sons of Hamor at Shechem was used to bury Joseph after coming out of Egypt (Joshua 24:32), Joseph having the birth-right of inheritance from Jacob. Land was bought- at a cost - even though the fathers were promised an everlasting possession! Then the children, some hundreds of years after, had to fight to gain control of the land they bought.

Back in the beginning Israel did not settle an unoccupied land. They did not, by sheer force of numbers or with superior armaments, take over from a disorganised native population. The Canaanites had plenty of armaments, good fortifications and despite divisions, in the instance of Gibeon (Joshua 10:4) showed they were able to unite to repel invaders. It was said,

Hear, O Israel: Thou art to pass over Jordan this day, to go in to possess nations greater and mightier than thyself, cities great and fenced up to heaven, A people great and tall, the children of the Anakims, whom thou know, and of whom thou hast heard say, 'Who can stand before the children of Anak!' (Deuteronomy 9:1-2)

After buying land, both Ancient and Modern Israel overcame superior forces to occupy and rule the land, without having much organisation to its leadership at all! This was the land promised to the children of Israel in a covenant with Moses (Exodus 32:13)!

Why should something that is promised cost so much? It seems it was promised but it wasn't given. There is a fine distinction. If something is just given to us do we value it? If it comes at a cost, we do value it. Some wise governments back community projects by promising to match funds raised by the community. The government 'promises' the project, but it only happens if the community has contributed in kind. The community values the project precisely because it comes at a cost. 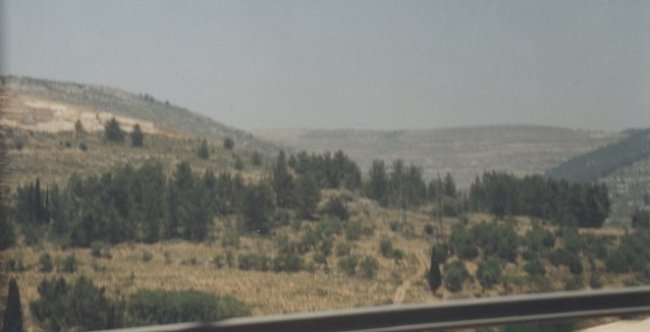 Israel at its beginning, both times, fought for its possession as the weaker people. This possession has stronger feeling attached than Canadians or Australians for example, who found freedom by possession, and later fought for freedom, not on 'native' soil but just about everywhere else.

The point of all this seems to be that the current situation, where Jewish people collectively through KKL-JNF and others buying land and contributing to redeem it, and of the acquisition of increased territory through defensive battle, is part of the process of gaining the promised everlasting possession. Everlasting possession doesn't mean you always had it. It means once you do acquire it from others you get to keep it.

For Israel the keeping of the mountains is existential. In the ebb and flow of kingdoms, if another nation, an enemy wants it, they ought to fight for it. As Jephthah said to the Ammonites, in a similar situation as today,

“Israel sent messengers to Sihon king of the Amorites..Israel said 'allow us to cross'..But Sihon mustered all his troops..he engaged Israel in battle. But the LORD, the God of Israel, delivered Sihon and all his troops into Israel's hands...and Israel took possession of all of the land of the Amorites from Arnon to the Jabbok and from the wilderness to Jordan. Now then, the LORD, the God of Israel, dispossessed the Ammonites before His people Israel; and should you possess their land? Do you not hold what Chemosh your god gives you to possess? So we will hold onto everything that the LORD our God has given us to possess...while Israel has been inhabiting...all the towns ..for three hundred years, why have you not tried to recover them all this time?” (Judges 11:19-23)

Ancient Israel grew, and shrank and grew in territory and in numbers and, then after they had expanded, they became a kingdom. Today, the redemption work of the land is to form the basis of the renewed kingdom, of which it was said it would last to the vanishing point of time (Psalm 72:17). Arabs, either Muslim or Christian, in what was Palestine had not redeemed land to make it suitable for future generations, for a kingdom where every person is to dwell safely under their own vine and fig tree (Micah 4:4).

The desert may blossom as the rose (Isaiah 35:1), but a fertile land won't be a free gift. Wherever humans have toiled to make the soil rich they have made it suitable for the next generation, and the one after that, and perchance a possession for their people to the vanishing point of time.

Link to New Heavens and a New Earth

Every mention of the River Euphrates in the Bible is a link in story from Eden to the Kingdom of God. It explains why there is conflict in Syria, and why that area is crucial to the lead up to Armageddon, as the the world descends into an era of evil.

If you know nothing much about the Bible, or a lot about it, a key part of the Bible is the promises made to Abraham. There are a few components to the promises, but the first part is that Abraham was asked to leave his home to go to the land that was promised to him.