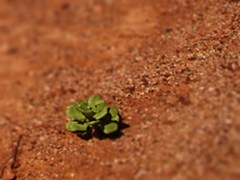 When Jesus was making the comment about all things being possible he was referring to the ability of God to save us by eternal life, but does it apply to other trials within our lives where prayer has seemingly been unanswered?

An angel uses the word “impossible” when speaking to Mary, the mother of Christ in Luke 1:37. Two stark contrasts are presented to Mary - her cousin Elisabeth was barren, but was now six months pregnant with John the Baptist and she, a virgin, was to be the mother of the Son of God. Both of these things were impossible by human standards. When Mary goes to see Elisabeth, she quotes the words of Hannah, the mother of Samuel, from 1 Samuel 2:1-10. Hannah had also been barren, and the similarity with her own and Elisabeth’s situation must have touched Mary’s heart. For all three of these women impossible means had been chosen to show God’s salvation. But they were not the only three; Sarah, Rebekah and Rachel, the wives of Abraham, Isaac and Jacob had also all been barren.

The importance of Abraham is highlighted by Paul in his letter to the Galatians when he says that God preached the gospel to Abraham (Galatians 3:8) saying “In you shall all the nations be blessed”. Abraham had been called by God to leave his father’s country and house and to go to a land that God would show him (Genesis 12:1). At 75 years of age he leaves Haran for Canaan with Sarah and Lot. God tells him that this is the land that He will give his children (Genesis 12:7). After Lot and Abraham separate God again tells Abraham that He will give him and his children the land of Canaan (Genesis 13:14-17). The problem was that Abraham’s wife Sarah was barren and Abraham presents this to God who replies that the children will be through Sarah (Genesis 15:1-7) and that he and they will inherit the land of Canaan. It is not until Abraham is 99 and Sarah 90 years old that Isaac is born as God promised (Genesis 17:1-9 & 18:9-15 & 21:1-2), something so incredible that Sarah had to laugh when she was told it would occur.

Hebrews 11: 8-19 gives us more information as to how Abraham and Sarah felt during the 25 years between the first promise and the birth of Isaac. They maintained faith that God would do as He said even though it was seemingly impossible. God had specifically chosen the impossibility to show that He would bring salvation. In Hebrews 6:18 God gave two things to Abraham to show convincingly that He would do as he promised saying “I will bless you and multiply you” (Hebrews 6:14). The impossibility of the birth of Isaac was to show conclusively that the promise that God gave Abraham that he would inherit the land of Canaan would occur. Given the evidence that Abraham had seen with Isaac’s birth, Abraham believed that God could even raise the dead (Hebrews 11:19).

Throughout the Bible impossibility is often used by God. Some examples include the Ten Plagues in Egypt, Gideon, Daniel in the lion’s den and the healing miracles of Jesus. The irony is that the most amazing examples of salvation occur at the lowest point in people’s lives. This was seen in the formation of the nation of Israel in 1948.

We can wonder why God chooses impossibility in our lives. Three potential reasons can be seen in the Bible. Firstly, the pure difficulty of the event occurring shows that it is the hand of God. Secondly, it shows the power of prayer and thirdly our reaction of faith. None of the six women would have initially thought that their trials were related to salvation, but in each case they were all pivotal to God’s eternal salvation by Jesus Christ.

Resurrection from the dead is humanly impossible, and again God uses it as a guarantee that He will do what He has promised. The apostle Paul picks up on the incredibility of Jesus’ resurrection when speaking with King Agrippa (Acts 26:8-19) and acknowledges that he stumbled at the very concept until Jesus appeared to him on the way to Damascus, the humanly impossible event that resulted in his conversion. Paul, in 1 Corinthians 15, gives the resurrection of Jesus as a reason to believe in the resurrection of the dead at the return of Jesus and the promise of eternal life.

6am and the sun falls over my blanched face. A new day is here. My soul waits for the Lord more than the watchmen for the morning (Psalm 130:6)

Every mention of the River Euphrates in the Bible is a link in story from Eden to the Kingdom of God. It explains why there is conflict in Syria, and why that area is crucial to the lead up to Armageddon, as the the world descends into an era of evil.