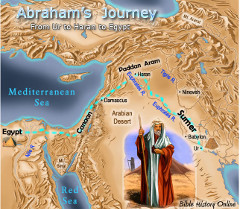 The river Euphrates occurs 21 times in the Bible and has quite a powerful story. The first mention of it is in Genesis 2:14 where the Euphrates is described as the fourth river that defined the boundary of the Garden of Eden. The Garden of Eden was where Yahweh had formed and placed Adam and Eve. The garden had every tree that was pleasant and good for food and it contained the tree of knowledge of good and evil. The Garden of Eden, bounded by the Euphrates was the area where Adam and Eve were tempted by the serpent and as a punishment for their sin in eating of the tree of knowledge of good and evil they were driven out of it.

When the Israelites first enter the Promised Land after their journey out of Egypt Moses instructed them in Deuteronomy 1:7 to go and possess the land that extended “unto Lebanon, unto the great river, the river Euphrates”. Israel were intended to have the land that extended up to the river Euphrates in accordance with the promise made to Abram. This promise was reiterated a number of other times. “Every place whereon the soles of your feet shall tread shall be yours; from the wilderness and Lebanon, from the river, the river Euphrates, even unto the uttermost sea shall your coast be” (Deuteronomy 11:24). It is important to look at the context of Deuteronomy 11, it is a chapter that contains blessings and cursings. There is a condition given in Deut 11:22 that precedes the promise of v24: “IF ye shall diligently keep all these commandments which I command you, to do them, to love the LORD your God, to walk in all his ways, and to cleave unto him; THEN will the LORD drive out all these nations from before you”. This idea ties in with what happened to Adam and Eve in the Garden of Eden. There is a requirement of Yahweh’s people to keep His commandments in order to gain the blessings from Him. After the death of Moses Yahweh reiterates the same words of Deut 11:24 to Joshua in Josh 1:4 that Israel was to possess the land “even unto the great river, the river Euphrates”. Joshua is told to be strong and very courageous to observe to do all the Law that Moses commanded for it is only “THEN thou shalt have good success” (Josh 1:7-8). 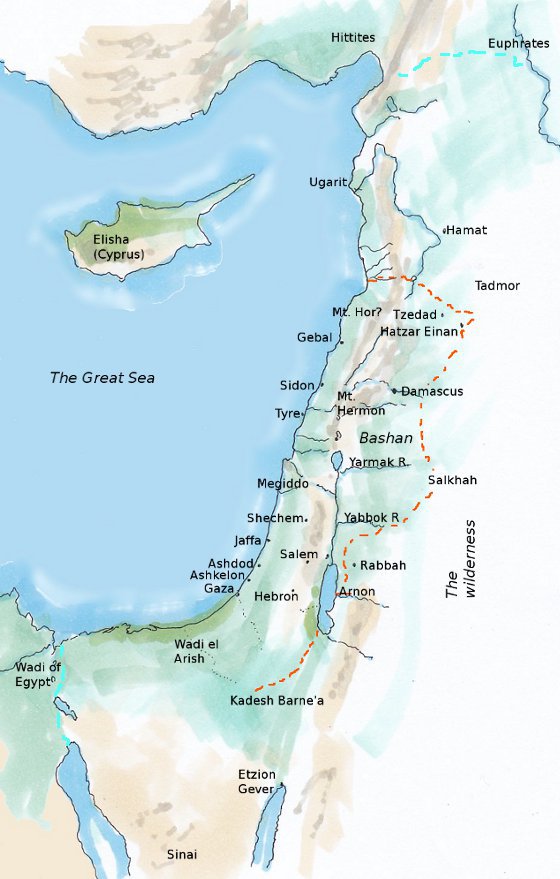 No further mention of the river Euphrates is made until the time of King David. In the described division of the Promised Land by the twelve tribes it is interesting that no tribe was allotted land from beyond Mount Hermon up to the river Euphrates. Joshua chapters 13-21 describe the division of the land. The tribes with their inheritance furthest north were Asher and Naphtali (Joshua 19:24-39) which contained the northern cities of Tyre and Kedesh respectively. This left the area from Baal-gad just below Mount Hermon all the way up to the river Euphrates open for any tribe to possess. Joshua 11 and 12 describes the area that was possessed during the early conquests and included Baal-gad in the valley of Lebanon and the land below Mount Hermon (Josh 11:17;12:1 & 5). The land still to be conquered is described in Joshua 13:1-6 and included all the land further north than Mount Hermon.

In Judges 18 some from the tribe of Dan were searching for an inheritance and they alighted on Laish, an area that was quiet and careless and they sent 600 Danites who took the city. While Judges 18 is largely concerned with the events surrounding Micah and the graven images verses 1,9 and 10 give us insight into how tribes could extend their inheritance from the areas that they had been allotted in chapters 13-21. The area allotted to Dan was much further south, just to the east of Jerusalem, however it was felt to be too small for a growing tribe so they searched to spy out the land in Judges 18:2.

The next mention of the river Euphrates is in 2 Sam 8:3 and 1 Chr 18:3where King David went out to smite Hadadezer as “he went to recover his border at the river Euphrates”. The Syrians went to help Hadadezer and King David slew 22,000 of the Syrian army. David then placed garrisons in Syria and they became servants to David and “the LORD preserved David whithersoever he went” (2Sam 8:6, 1Chr 18:6). King David recognised that the land of Syria right up to the river Euphrates was an inheritance of Israel and for this reason Yahweh blessed his endeavours to possess it. Israel’s control over Syria was of limited duration and by the time of Solomon Rezon a servant of Hadadezer reigned over Syria (1 Kings 11:23-25). The reason for the loss of Syria was that Yahweh was angry with Solomon because Solomon had turned away from Him (1 Kings 11:9) and adversaries were then raised up against Israel including Rezon. Throughout the time of the successive kings of Israel the Syrians continued to be a source of conflict and trouble to Israel.

King Josiah is another king who also fought over this area. In 2 Kings 23:29 Pharaohnechoh king of Egypt went to war with the king of Assyria over this land and king Josiah takes the opportunity to also go out to war over the land. However Josiah had no success and was slain at Megiddo. The king of Assyria then took control over this land (2 Kings 24:7) four years later. 2 Chr 35:20 has a parallel record of this battle and adds in the phrase “when Josiah had prepared the temple”. Josiah certainly perceived it as a righteous action to regain possession of the inheritance of Israel. In 2Chr 35:21-22 Josiah is warned by Necho of Egypt not to go out to war as God was with Necho. King Josiah would not accept that Yahweh was with Necho, Josiah even goes to the extent to disguise himself in battle. As the events show Necho was not preserved by Yahweh as Necho loses a second battle to Nebuchadnezzar the king of Babylon in the fourth year of Jehoiakim, the son of Josiah (Jer 46:2).

The next record of the river Euphrates is in Jeremiah 13. Jeremiah is told by Yahweh to go to the river Euphrates and to place a girdle there and to recover it after many days. While the girdle was buried there it deteriorated and the girdle was likened to the state of Israel and Judah, it was marred and profitable for nothing (Jer 13:7). The events of Jeremiah 13 predate the events of Jeremiah 46 in the paragraph above and this gives us insight into why king Josiah lost the battle against Necho. While Josiah was righteous the nations of Israel and Judah were not. Israel and Judah were then put to flight before their enemies, the Egyptians, the Assyrians and the Babylonians. This follows the lessons of the cursings and blessings experienced the Garden of Eden and written in Deuteronomy 11.

From the time of the Babylonian Empire control over the Euphrates in the region of Syria was exerted by the Median Empire, Persian Empire, Alexander the Great, Seleucid Empire, Parthian Empire, Roman Empire, Byzantine Empire, Sassanid Empire until the Islamic conquest in the mid 7th century which brought it into the Ottoman Empire. The Ottoman Empire controlled the area until WW1 when the Allies gained control over the area dominated by the Ottoman Empire and it was partitioned. The area of Lebanon and Syria became a French Mandate, while the British Mandate covered Mesopotamia and Palestine. Under the French Mandate both Lebanon and Syria gained independence in 1943 and 1946 respectively.

Returning to Revelation 16:12-13 three unclean spirits come out of the mouth of the dragon, beast and false prophet. This refers to the French influence of liberty, equality and fraternity coming from the three sequential phases of the Roman and Byzantine Empires. The French Mandate and the gaining of independence over the Euphrates is at a time that leads into WWII and then into Armageddon. 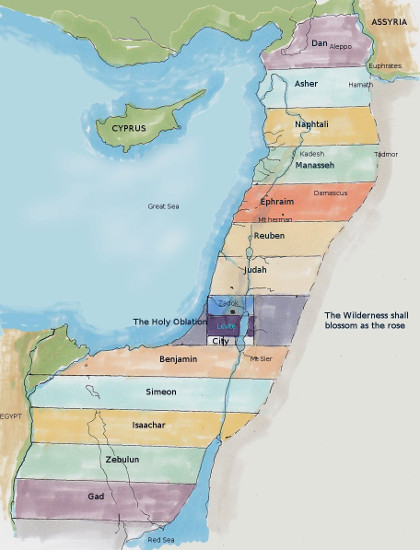 Rev 16:19 describes the division of the “great city” into three. The “great city” refers to Jerusalem. The armistice line of 1949 split the city into two, one half controlled by Israel and the other half controlled by Jordan. In 1967 Israel regained control over all of Jerusalem and ousted the Jordanian army. The division of the great city into three refers to the division between the Jewish, Islamic and Christian influences. There are four quarters in the Old City of Jerusalem, the Jewish, Muslim, Christian and Armenian. The Armenians consider themselves part of the Christian quarter, making a total of three divisions not four. The Jews worship at the Wailing Wall, Moslems worship at the Dome of the Rock and Christians at the Church of the Holy Sepulchre.

In conclusion it is worthwhile to consider the meaning of the word Euphrates which means to “break forth” and “rushing”. Breaking forth has connotations of a bursting out resulting in a sudden change. Through the whole Bible it is associated with a boundary that contains a Promised Land, but when evil occurs the boundary is lost and trouble results. At the time of Armageddon it becomes a boundary of the final battle ground where Yahweh contends between good and evil.

For more see Palestine, whose land is it?

If you know nothing much about the Bible, or a lot about it, a key part of the Bible is the promises made to Abraham. There are a few components to the promises, but the first part is that Abraham was asked to leave his home to go to the land that was promised to him.

Great promises have been recorded in the Bible as having been made to individuals. Knowing these is the key to understanding the whole Bible.