ANZAC Day: The sacrifice at Gallipoli 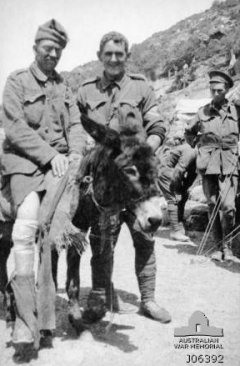 Why do people call the loss of life at Gallipoli a sacrifice?

What did their sacrifice achieve? Something of benefit to Australia or to the Commonwealth? Certainly not either, as the Dardanells campaign was acknowledged by all as, at best, a fiasco, which led to the resignation of Churchill who planned it, and, at worst, a defeat. Even today the ANZACs are seen as having been defeated at Gallipoli.

“The landing at Gallipoli was a major event in the war. Even though the Gallipoli campaign was a military defeat, it helped to provide Australians with a new sense of their identity and place in the world... People in Australia knew their boys were training for their ‘baptism of fire’ ...” (anzacday.org)

The eventual failure of the Gallipoli operation enhanced its sanctity in the public mind; the courage and sacrifice of the New Zealand soldiers in adversity was highlighted. (nzhistory.net)

Is not this odd? That failure and defeat should “enhance sanctity” and inform identity is not the normal outworking of human nature. What other nations celebrate nationally a military defeat as a marker of their identity? For many years Japan, for example, did not remember Hiroshima.

Of even more interest is that persistently the loss of life at the Gallipoli campaign is called a 'sacrifice'.

Australia and New Zealand commemorate the ANZAC Day on the 25th of April every year to honour the bravery and sacrifice of the members of the Australian and New Zealand Army Corps (ANZAC) (en.wikipedia.org/wiki/ANZAC_Day)

The day Australians remember is the original landing on Gallipoli in 1915. The spirit of ANZAC, with its human qualities of courage, mateship and sacrifice, continues to have meaning and relevance for our sense of national identity. (www.awm.gov.au/)

All in all, in the Gallipoli Campaign which ultimately ended in defeat, more than 8700 Australians and between 2400 and 2721 New Zealanders were killed. In relation to the two countries' population at the time, this was a massive loss of lives -- a sacrifice remembered deeply on Anzac Day. (goaustralia)

These are three examples. Google (2011) gives over 780,000 occurrences where the word 'ANZACs' and 'sacrifice' occur in the same article. To people from other cultures, the use of the word sacrifice may seem very odd.

Why do Australians persist in calling the Gallipoli campaign a sacrifice?

It was the first campaign where Australians fought as a recognisable unit and there was intense interest in the landing and its outcome. It was thought these men fought for the honour of their country. So those who died became heroes. So much so that:

Death notices on the first anniversary were sent not only by parents, husbands, sisters and sons and daughters - but also friends, cousins, work mates, fellow church members, and families of soldier mates. (anzacday.org)

This text is recent. It casually mentions the importance of “fellow Church members”. It cannot be co-incidence, but it just so happens that in 1916, on the first anniversary of the landing, it was a Tuesday and the very Sunday before was Easter Sunday, which fell that year incredibly late on April 23. Easter Sunday services would always be about the sacrifice of Christ. And in 1916 the majority of Australians attended a church. The idea of sacrifice was on their mind that anniversary day. It would be natural for them to associate the two events and in effect “sanctify” the death of sons and brothers.

Image at top is is from Australian War Memorial

Cyrus the Great encouraged the Jews to rebuild their Temple and return to their homeland.

What the world leaders intend and what God directs may be different things. In this case of the US Administration's action in the UN Security Council the Bible, with an amazing track record, both predicted the situation and indicates the future, which won't be as they hoped. They are on the wrong side of the Maker of history.

Shimon Peres: The writing on the wall

Shimon Peres has been a man of sign in his life and now in his death and burial.