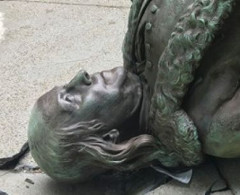 Boston wasn’t close to being the windiest place in New England over the past few days, but conditions Sunday were still blustery enough to knock over the Ben Franklin statue, which has stood in front of Boston’s Old City Hall for more than 150 years. The bronze statue was placed on the original site of Boston Latin (which Franklin attended before dropping out) in 1856. It’s the city’s oldest -and first - portrait statue, and until Sunday, no one thought it would fall.

On Sunday, a tent in nearby courtyard was caught in a gust of wind, blowing into the statue — which wasn’t secured to the base and knocking it the ground, McDonnell said. “The statue was installed before the building was ever built. There’s no indication that it was ever attached to the base,” McDonnell said. “We also have no record of it ever falling over.”

The scriptures speak of God's control over wind.

Who lays the beams of his chambers in the waters: who makes the clouds his chariot: who walks upon the wings of the wind: (Psa 104:3)

So what is God telling us in pushing over Benjamin Franklin? Firstly his name was what his purpose was and Benjamin means “son of my right hand” and Franklin mean “freeborn.” 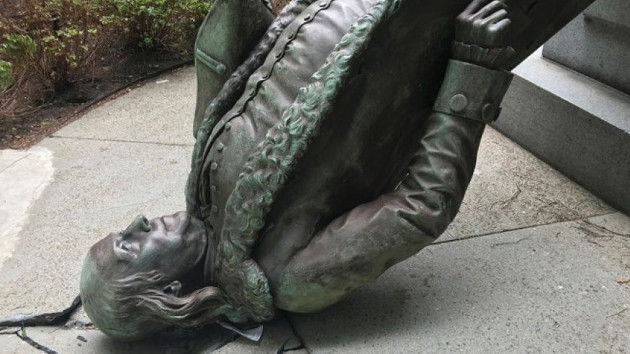 Ironically, Franklin is famous for flying a kite in a storm – and he also made wind observations. He deduced that storms do not always travel in the direction of the prevailing wind, a concept that greatly influenced meteorology.

Bonnie McGilpin, spokeswoman for Boston Mayor Martin J. Walsh, said high winds pushed a tent into the statue, causing it to fall off its pedestal. McGilpin said city officials believe the bronze statue was knocked over sometime around 1 p.m, adding that, thankfully, no one was injured.

According to Karin Goodfellow, executive director of the Boston Art Commission, it could take a month to repair the damage to the statue and the cracked cement where Franklin’s head landed.

The Benjamin Franklin statue marks the location of the original Boston Latin School, the oldest public school in the nation. The Freedom Trail Foundation website says Franklin was once a Boston Latin School student, noting that he did not graduate. www.boston.com/news

Wikipedia picks out some characteristics of Franklin.

“Franklin was foundational in defining the American ethos .. the practical values of thrift, hard work, education, community spirit, self-governing institutions, and opposition to authoritarianism both political and religious, with the scientific ..values of the Enlightenment.


Franklin felt that organized religion was necessary to keep men good to their fellow men, but rarely attended religious services himself. 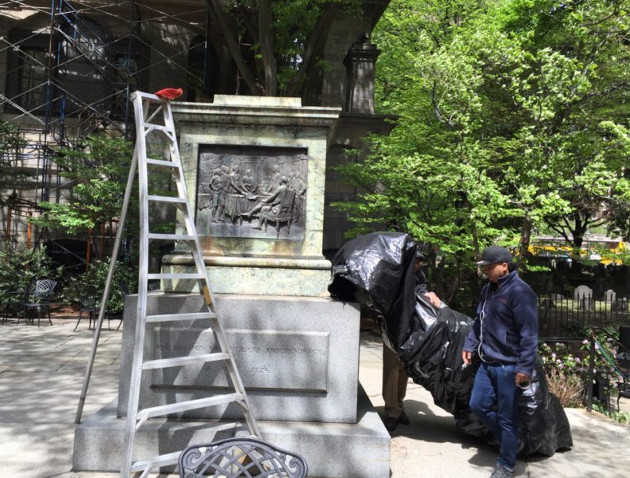 One of Franklin's notable characteristics was his respect, tolerance and promotion of all churches. Referring to his experience in Philadelphia, he wrote in his autobiography, "new Places of worship were continually wanted, and generally erected by voluntary Contribution, my Mite for such purpose, whatever might be the Sect, was never refused." ..The evangelical revivalists who were active mid-century, such as Franklin's friend and preacher, George Whitefield, were the greatest advocates of religious freedom, "claiming liberty of conscience to be an 'inalienable right of every rational creature.'" Whitefield's supporters in Philadelphia, including Franklin, erected "a large, new hall, that ... could provide a pulpit to anyone of any belief."

Franklin worshipped a God of ethics, morality and civic virtue.

Franklin as a young man adopted the Enlightenment religious belief in deism, that God's truths can be found entirely through nature and reason. "I soon became a thorough Deist." As a young man he rejected Christian dogma in a 1725 pamphlet A Dissertation on Liberty and Necessity, Pleasure and Pain, which he later saw as an embarrassment, while simultaneously asserting that God is "all wise, all good, all powerful." He defended his rejection, "I think opinions should be judged by their influences and effects; and if a man holds none that tend to make him less virtuous or more vicious, it may be concluded that he holds none that are dangerous, which I hope is the case with me." After the disillusioning experience of seeing the decay in his own moral standards, and those of two friends in London whom he had converted to Deism, Franklin turned back to a belief in the importance of organized religion, on the pragmatic grounds that without God and organized churches, man will not be good. Because of his proposal that prayers be said in the Constitutional Convention of 1787, many have contended that in his later life Franklin became a pious Christian. Wikipedia

It seems that Franklin had little faith, rather a pragmatic view of 'good'.

While he was living in London in 1774, he was present at the birth of British Unitarianism, attending the inaugural session of the Essex Street Chapel, at which Theophilus Lindsey drew together the first avowedly Unitarian congregation in England; this was somewhat politically risky, and pushed religious tolerance to new boundaries, as a denial of the doctrine of the Trinity was illegal until the 1813 Act. Wikipedia

The Unitarianism of 1774 is not to be confused with the faith of those who had always rejected the trinty following the Jewish Apostles and those who rejected Greek pagan corruptions. Wikipedia doesn't mention Benjamin Franklin's association with Joseph Priestley, who argued against the trinity. Benjamin Franklin sadly never searched into the matter himself, as his bias was to avoid it. He made the mistake of elevating his own thoughts above the God of the Bible.

We must never mistake the freedom to search without political coercion and the threat of death, with freedom from firm belief. The enlightenment said man could decide what to believe (or to not believe anything at all), whereas in fact we have only and always had merely to make a choice between truth and error, between knowledge of God and ignorance. The open availability of the Bible and a reduction in political coercion at least allowed knowledge of the Bible, so that choice could be made. Benjamin Franklin's work and legacy stands for religious freedom and objective experimental-based science. What has America given up in seeking political correctness? Both these things.

A signer of both the Declaration of Independence and the Constitution, Franklin is considered one of the Founding Fathers of the United States. Wikipedia

In this way his fall also is another sign of the fall of America's lead in global political influence.

The most interesting comment may well be that soon all like Franklin who think they can believe what they wish will be brought low. For Franklin's head, which speaks of his thinking, hit that pavement so hard he broke it. He was raised up on that pedestal, but his head (or thinking) was 'brought low'.

If you liked this you may like Iced In a Warming Sea?

The Age of the Earth: A point to Eternity

We were discussing the age of the earth, for there is debate on this matter, when it was pointed out that our great Creator's habitation is the universe, and he has always existed.

There has been a fact lost in translation from objective science to politics.