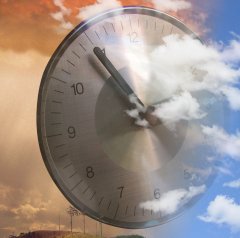 In the past, with great fervour, people have set dates for the Millenium, but they have passed. Does this mean that all things continue as they were from the beginning of creation? We can know this is not true as, for sure, the only thing certian is change. We pray 'thy kingdom come' and for our Lord's return. We think we are in the last days and the return is near. But how near is near?

Isaac Newton had cause to rebuke some in his generation for predicting the end dates of 1712/16 and 1736 being promoted in England, advancing the possibility of 2060, “put a stop to the rash conjectures of fancifull men who are frequently predicting the time of the end, & by doing so bring the sacred prophesies into discredit as often as their predictions fail”. In America there was even a popular movement of the Millerites crossing denominations in1843/4 all waiting to be taken, and for the millenium to begin.

If over time people were keen to set dates, why aren't people doing so now? Why isn't there public debate? As 1844 approached many might have disagreed, but it was a national issue in America, and elsewhere. Recently the year 2,000 passed and the weak debate died (2,000 was actually 1996 years since CE).

The issue is not that people fear to bring the prophecies in discredit, as Newton rebukes only rash or uneducated conjectures! He himself noted a date! It is to be feared there is no debate as people don't know the prophecies. Yet we are closer to the time than the era of great debate of the 1700's and 1800's!

We surely are in the era that Daniel predicted that the wise will know!

Some may be aware of Newton's prediction of the end of time in 2060 as Stephen Snobelen created a minor media storm when he showed Newton's paper with the date in a documentary! But few are aware of why Newton came up with that date.

Daniel notes there will be 1260 years from the rise of the political power speaking great things against Jews and true servants of God until the end of that power and the kingdom. Newton saw this power as the Holy Roman Empire where the Catholic Church obtained its terrible political power to wage war against the true servants (which didn't arrive in one year). Charlemagne's crowning in 800 then gives the year 2060 as the end of Europe. But Newton also noted that 1260 might be begun on a few dates including 774 which would mean he thought the heritage of Roman power globally could end in 2034. Things might go on then ...

Newton is rather formidable, as in his papers is an explanation of prophecy indicating that he was certain that long after his death in the era before the end, Jews would rule Jerusalem. As we now know, Newton was correct. This occured in 1967. Newton goes on to say specifically that he understood that 49 years (7 prophetic weeks were a day=a year) after Jews ruled Jerusalem Christ their Messiah would come.

This is rather amazing as Newton, therefore, places the end of time, end of this political era, in 2016. He aslo understood that his was not yet the era when the wise would understand. If we look at those who followed Newton in the 1800s, we see that they focus not on 800 or 774 but on the very beginning of Charlemagne's power, the rise of his father Pepin in 756 which Newton also wrote of, not on an envelope, but in his book Observations on Daniel. And that brings us again to 2016. On two counts, using two different prophecies of Daniel, Newton's logic suggests the end of the political age of Europe being 2016. If Newton were alive today 2060 would be 2016...

But there is more- whereas in Newton's day the Papacy was still powerful, events afterwards especially Napoleon's actions and more recently the return of the Jews, the capture of Jerusalem and the unification of Europe allow us to see ends of time periods, and others start.

Objective exhaustive research of other prophecies with specific time periods appointed shows the following: note the links take you to more detail on the calculations:

Some are worried about the year 2012 because of one previously lost, partially obscured, obscure statement with a cycle of time noted. But these dates above are from a book considered so powerful it has been translated into nearly every language. Multiple start dates result in multiple ends dates. It is to be noted also that each time period is to a different event. As you can see it is a scatter with some having 3 or 4 possible ends. Regime changing events often aren't on a day, but may occur over a few years.

Now Germany is a leading arms manufacturer and leader in Europe. Without the world being concerned, Europe became a superpower. The pan-European Empire of Pepin and Charlemagne became the 'First Reich'. We know what occurred with the Third Reich. We have already the Fourth Reich....in all but name, the kings and rulers of Europe have given their power to one humanist entity (the parliament like Babel) and the Papacy is beginning to have a great say in Europe.

From Daniel 12, the power (Muslim) that scatted the Holy people for 1260 years ceased by 1903, and by 1922 the British began a process to end the 1290 year long non-Jewish foreign rule of Jerusalem which ended at the 1335 years in 1967, from which time a blessed generation could know they were the generation of Luke 21 to see the return. How long is a generation – it turns out 40 up to-50 years .

But blessed are those who came to the 1335 years which ended in 1967. That generation could know for sure that their Lord would return within the generation.

It is to be noted that these dates after 2014/5 are for events related to the return 'with clouds'. The taking up of the faithful 'in clouds' is before. But we do not know the day or the hour- or the year- of that! We simply aren't told.

But if it was an overseas holiday, one would be preparing for it now.

For more Luke 21 & the Generation

and Israel shall abide many days without a king. Hosea 3:4