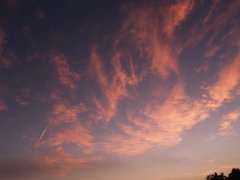 There are not many prayers recorded in the scriptures in their entirety. The fathers of Israel often talked to their God, Yahweh Elohim, directly rather than offering prayers.

The prayers that are recorded are powerful as many are answered directly, with miracles. The miracles recorded must have occurred, as in some cases they change the fate of a nation, and always they carry the stamp of truth.

It is a sobering thought that in prayer we approach a Being that can instantly change the way things are, and who has power over our life and death. How should such a Being be addressed?

We have been given the answer: the Bible, a book with approved exemplar prayers written for our benefit. If we desire to serve the Creator of life, whose Hebrew name is Yahweh meaning 'He will be', these are a good pattern to follow.

The Hebrew and Greek words for 'pray' and 'prayer' mean to intercede, beseech, and make supplication. These words imply an earnest seeking for good from another.

We are not told when the first prayer was offered, but they began to call, or to ask things, in the name of God when Seth's son, the promised 'seed' of Eve is born.

To Seth..also there was born a son; and he called his name Enos: then began men to call upon the name of Yahweh. (Genesis 4:26)

Abraham made a habit and called on Yahweh at a special place, Bethel

Unto the place of the altar, which he had made there at the first: and there Abram called on the name of Yahweh. (Genesis 13:4)

We have been given the precise wording of a few prayers. Many are very short.