1) AntiChrist is hardly mentioned in the Bible

People may think that Anti-Christ is a common idea in the Bible. It's not. The idea occurs exactly five (5) times in the entire Bible. All 5 instances are in one book of the Bible, and by one writer, the apostle John, and in one context.

The first appearance of the word Anti-Christ in the Bible contains a reference to Antichrists. John writes in his letter to his children in the faith.

We can note a few things.

What common knowledge of that day was John referring to by saying antiChrist shall come at 'the last time'? Jude also refers to the same idea,

But, beloved, remember the words which were spoken before by the apostles of our Lord Jesus Christ; How that they told you there should be deriders (empaiktēs, false teachers) in the last time, who should walk after their own ungodly lusts. (Jude 1:17-18)

Jude (who was not an apostle) was referring to a letter by Peter, who was an apostle,

This second epistle.. That ye may be mindful of the words which were spoken before by the holy prophets, and of the commandment of us the apostles of the Lord and Saviour:

Knowing this first, that there shall come in the last days deriders (empaiktēs, false teachers), walking after their own lusts,

And saying, Where is the promise of his coming? for since the fathers fell asleep, all things continue as they were from the beginning of the creation. (2 Peter 3:1-4)

The word 'deriders' is the same word used by both Jude and Peter, and it is used nowhere else in the Bible. Jude was quoting Peter who wrote his letter about 58AD. The word means also 'false teachers', and in both instances Jude and Peter were warning about wrong ideas within the Christian congregation. In the case of Peter, he was warning about those in the congregation questioning the idea of the second coming. It is not an issue the non-Christian would have been interested in. It was purely an internal issue in the congregation.

John, who wrote somewhere between 60 and 90AD (about 70AD), which was after Peter's letters had circulated, refers to Peter's words, but in John's own inimical, unique style he called the false teachers or deriders (empaiktēs) 'anti Christs'. In Greek it is antichristos where the Greek word 'anti' meant not just 'opposite' as it does in English, but 'by contrast' or a 'substitute' (Strongs).

When Peter wrote, in 58-60AD, the last days were coming and by the time John wrote about 70 AD 'it was the last time'. The first rule of comprehension is to determine to whom text was written, when and why it was written.

Beloved, believe not every spirit/soul/mind, but try the spirits/souls/minds whether they are of God: because many false prophets are gone out into the world.

Hereby know you the Spirit of God: Every spirit that confesses that Jesus Christ is come in the flesh is of God:

And every spirit that confesses not that Jesus Christ is come in the flesh is not of God: and this is that spirit/mind of antichrist, whereof ye have heard that it should come; and even now already is it in the world. (1John 4:1-3)

John repeats this idea in his second letter, which is the last reference to antichrist(s) in the whole Bible.

For many deceivers are entered into the world, who confess not that Jesus Christ is come in the flesh. This is a deceiver and an antichrist.

Look to yourselves, that we lose not those things which we have wrought, but that we receive a full reward.

Whosoever transgresses, and abides not in the doctrine of Christ, has not God...

If there come any unto you, and bring not this doctrine, receive him not into your house, neither bid him chairō (cheer, happiness): (2John 1:7-10)

In John's eyes antichrist is equalled to just one doctrine, the idea that many people already had by around 70AD, that 'Christ had not come in the flesh'. John wrote that it is a sin that causes the loss of a Christian's reward to not confess Christ came in the flesh.

We may summarise the totality of what is said about antichrist:

As a last point the term was only used by the apostle John.

The last time has been already

We can't conceive how devastating the loss of the temple and the end of their nation was to the Jewish Christian congregation of that day. John, who had close connections with the High Priest's family (John 18:16), would have seen first hand how the once cohesive Jewish world had descended into multiple doctrinal divisions, one of which was that of the antichrists which was dividing the Christian congregation itself. Until 70AD the majority of Christians were Jews. The Jewish world had fractured into many ideologies, from the Hellenists (followers of Greek culture) and Roman supporters, Herodians, Sadducees to those on the other side, the Pharisees and Zealots, with extreme Zealots killing Jewish Hellenists or Roman supporters. Added to the mix were the Essenes and Jewish Christians. Jewish Christian groups, having Greeks and Romans in their midst, were affected by Hellenistic ideas, as well as those of the Pharisees.

How divided were the Christians of John's era? John wrote,

I wrote unto the church: but Diotrephes, who loves to have the pre-eminence among them, receives us not.

Wherefore, if I come, I will remember his deeds which he does, speaking against us with malicious words: and not content with that, neither does he himself receive the brethren, and forbids them that would, and casting them out of the church. (3 John 1:9-10)

If the division of Jewish Christians was dramatic, leading to angry words, some casting others out, and a power struggle of Diotrephes against the apostle John, the fate of the Zealots was worse. 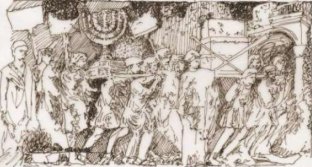 In a mere 2 years from 66AD to 68AD the Zealots divided into 3 factions, one led by Eleazar the Priest, the Sicarii led by Simon bar Giora, and another group led by John of Giscala, all who fought each other for control. No Jewish group by 69AD was cohesive, as the stress of the violence, and the emotion, of the internal and external struggles of the end time of the Jewish nation affected the whole Jewish world. In context, where John writes “it is the last time” in the present tense, in the logic of understanding an ancient text it is to this 'last time' of the Jewish nation, in 66-73AD, that John referred.

The idea that John referred to, which was held by the many antichrists, including possibly Diotrephes, continued to exist through time into the modern world, as it was a strong Christian faction by the latter half of the first century in Asia Minor, able to challenge even the apostles. John speaks a lot about how to know the true servants because they don't hate, indicating that those who held this doctrine like Diotrephes, showed hatred and violence.

From 100AD there was strong debate between the many so called 'Christian' leaders. By the time of Constantine there were a few distinct divisions, the dominant one of whom had institutionalised hate and violence against dissent. Therefore, we may still apply the test today to determine who they were,

This is the modern anti-christ.

But if Antishrist is only referred to 5 times, and all relate to a doctrinal split within the church of John's day, why is it such a big idea today?

There is no doubt anti-Christs still exist. The antichrists of John's day sought political power, as do their successors who are still around today. John called the anti-christs also false prophets (in multiplicity).