The Hubble Telescope (when working) sends back beautiful optical, ultraviolet and near-infrared pictures, but what else does it do? Is it, perhaps the most expensive digital camera made by mankind?

But looking further has raised more questions than it has answered. According to one theory, the new data seems to show accelerating expansion, which according to wikipedia is “currently very poorly understood”. For anything to accelerate requires the application of a constantly applied current force. In other words something is actively applying a force, which can't be a one off historical force, like the big bang. The kind of forces that result in acceleration can only come from a source of energy, they don't arise from nothing.

This week a fourth servicing mission of the Hubble telescope took place where astronauts repaired and replaced equipment, hopefully extending its life to 2014. 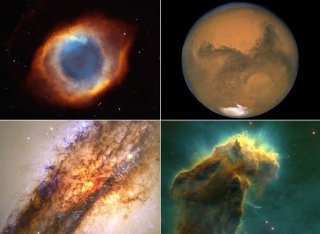 A commentator regarding the mission said words to the effect,

“it proves the value of having people up there in space to do things”.

Without people going up there and giving it a little push, the Hubble telescope's orbit will decay. It orbits Earth in the upper atmosphere and due to drag, without more human input, it will fall into the Earth's atmosphere between 2014 and 2032. This raises a question, the same one as the calculations from the telescope data has raised. What supplies the force to keep planets and moons in orbit so they don't decay?

The moon also orbits the Earth as a satellite. It, too, is subject to drag. To keep a satellite aligned and on course it needs little bursts of propulsion. Though resistive forces are much, much, less than on earth, a satellite won't orbit forever. From Purdue University pages,

A satellite or spacecraft orbiting the earth or traveling through the solar system encounters very small forces. For this reason, many satellite propulsion systems must deliver very precise ``impulse bits'' in order to accurately control the position or attitude of these objects. Reliability is of utmost importance in these systems since there is normally no real opportunity to service them over their entire lifetime http://cobweb.ecn.purdue.edu/~propulsi/propulsion/rockets/satellites.html 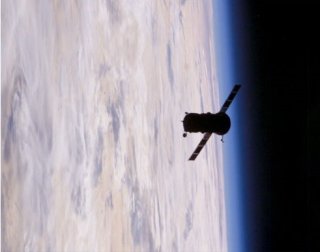 The moon is the earth's satellite yet it maintains its position and tilt. The relationship between earth and moon results in a 3.82cm per year increase in the distance between the earth and moon. There is spare energy due to the motion (any other satellite would fall to earth! And the moon is a very big satellite).

The moon and earth's gravity interacting together reduces the energy of Earth's motion and its angular momentum of rotation. The Earth's rotation is slowed by tidal drag about 0.002 seconds in a day every century. Yet though the Earth's spin on its axis is every so slightly slowing, the course about the sun affecting the length of a day is relatively constant with effects that would lengthen the year counteracted by those that would shorten it.

The Moon and Earth are a Satellite

By this principle alone there never could have been any motion in the world. Some other principle was necessary for putting bodies in motion: and now they are in motion, some other principle is necessary for conserving the motion...motion is much more apt to be lost than got, and is always upon the decay....all these things being considered, it seems probable to me that God in the beginning formed matter...” Optics Book III Part 1 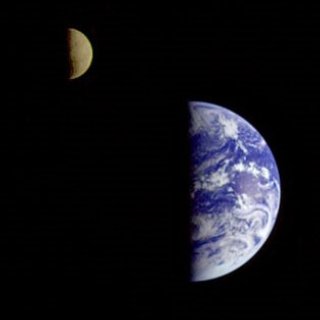 Newton added that he wrote only to “propose the principles of motion” but would “leave their causes to be found out”. He then proposed that the cause for planet and comet motion, as far as was logical was God,

“the wisdom and skill of a powerful ever living agent who being in all places, is more able by his will to move the bodies within his boundless uniform sensorium (small irregularities excepted -see context), and thereby reform the parts of the universe, than we are by our will to move the parts of our own bodies” Optics Book III Part 1

Newton was even clearer in a letter where he clarified his ideas,

In my former I {represented} that the diurnal rotations of the Planets could not be derived from gravity but required a divin{e} power to impress them. And thÃ´ gravity might give the Planets a motion of descent towards the Sun .., yet the transverse motions by which they revolve in their several orbs required the divine Arm to impress them according to the tangents of their orbs. I would now add that the Hypothesis of matters being at first eavenly spread through the heavens is, in my opinion, inconsistent with the Hypothesis of innate gravity without a supernatural power to reconcile them, & therefore it infers a Deity. Feb. 11. 1693 letter to Mr Bently

Science and the Bible

This conclusion is much like Job's. Job says of God,

Which shakes the earth out of her place, and the stands of it tremble. Which commands the sun, and it rises not; and seals up the stars. Which alone spreads out the heavens..Which makes Arcturus, Orion, and Pleiades, and the chambers of the south. (Job 9:6-9)

Job's knowledge was gained by both observation and communication, Jeremiah is told by no less than God himself that he designed the rules of our world,

Thus says the LORD; “If my covenant be not with day and night, and if I have not appointed the ordinances of heaven and earth”..then ...; (Jeremiah 33:25)

The God of the Bible directly claims to have put in place the laws that we observe today. He also claims to be active in maintaining them.

The burden of the word of the LORD for Israel, says the LORD, which stretches forth the heavens, and lays the foundation of the earth, and forms the spirit of humans within him... (Zechariah 12:1)

The God of Israel claimed to be actively 'stretching', 'spreading', or 'bending away' the heavens. Though in other contexts this spreading of the heavens refers to the atmosphere, there is no reason to not extend it further.

Observation of the Heavens in the Bible

Many references are made to the heavens when speaking of the power of God, but some focus on observation of the natural world. A psalm of David begins,

The heavens declare the glory of God; and the expanse of the sky shows his handy work. Day unto day utters speech, and night unto night shows knowledge. There is no speech nor language, where their voice is not heard. Their line is gone out through all the earth, and their words to the end of the world. In them has he set a tabernacle for the sun..His going forth is from the end of the heaven, and his circuit unto the ends of it: and there is nothing hid from the heat thereof. (Psalm 19:1-6)

This claims that the word of God goes forth day after day. This is the view point of an observer on the earth, where one observed the motion in the sky and how it affects humans. In another psalm

When I consider thy heavens, the work of your fingers, the moon and the stars, which you have ordained; What is man, that you are mindful of him? and the son of man, that you visit him? (Psalm 8:3-4)

Isaiah speaks of God's power over the circle of the earth, that Job said hung on nothing (26:7)

It is he that sits upon the circle of the earth, and the inhabitants thereof are as grasshoppers; that stretches out the heavens as a curtain, and spreads them out as a tent to dwell in: (Isaiah 40:22) 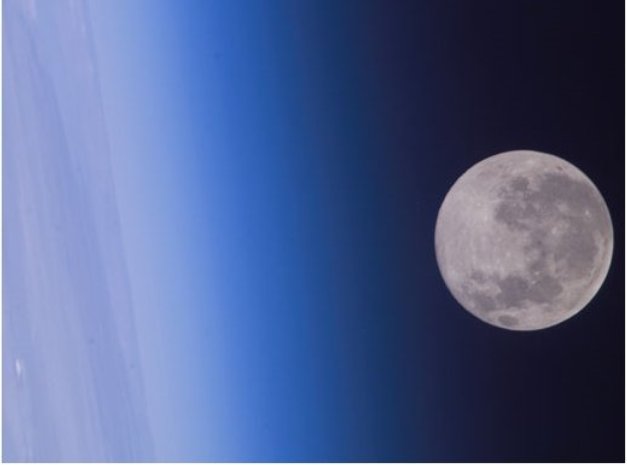 Amos speaks of an active ongoing building work of order and layers in the heaven,

It is he that builds his storeys (progressions, stairs) in the heaven, and has founded his troop in the earth; he that calls for the waters of the sea, and pours them out upon the face of the earth: The LORD is his name. (Amos 9:6)

And Jesus, who should know, says God actively makes the sun to rise,

That ye may be the children of your Father which is in heaven: for he makes his sun to rise on the evil and on the good, and sends rain on the just and on the unjust. (Matthew 5:45)

Human observation establishes that with satellites there is “value” in “having people up there in space to do things”.

Humans know by experience that satellites require energy to launch into orbit, and very small amounts of energy to maintain course and attitude. It is logical to conclude the earth's original satellite, the moon, also requires the ongoing intelligent application of force.

Some humans expect other intelligent life to be 'out there' in space. The Voyager 1 and 2, both launched in 1977, contain pictures and a gold phonograph record to communicate life on earth to possible civilizations on distant stars. A committee led by Carl Sagan of Cornell University decided on the content. The record includes greetings in 55 languages. http://en.wikipedia.org/wiki/Voyager_Golden_Record

The chance of this small craft being found by beings from another earth is very small, Voyager 1 after 40,000 years may be within 1.6 light years of the star AC+79 3888 in the Camelopardalis constellation. In addition since 1977 the greater resolution pictures by Hubble show there is no chance of finding an earth-like civilization in any nearby star. (In addition who plays records any more, even on earth?)

But all these searches for intelligence miss the point. They are looking for a lesser, or equal to, human intelligence moving things 'out there' in space. The evidence that we can observe from earth speaks of a greater intelligence working daily in the universe.

It is possible the data from the Hubble has shown to humans acceleration and expansion of objects in space. If we see ordered acceleration we can know an intelligently applied force is working. Scientists who refuse to think of a greater intelligence than themselves working out there in the universe are mystified. They can understand the principles of the expansion but not the cause.

From science we can suggest the logical cause would be an intelligently applied force.

Let us put two an two together. Jesus, who would know, says God is 'spirit' (John 4:23), in Greek the word is 'pneuma', from which we get 'pneumatic', a word describing a type of force using air movement. In modern terms God is energy. The Bible tells us the God of Israel is energy and is stretching or expanding the heavens.

If indeed there is acceleration in the universe, the cause is simple, the God of the Bible is moving things, just as God said and the Hebrews observed thousands of years ago. There is intelligence out there. And He is doing things in space.

There is value in having intelligence up there in space to do things.

For more on Newton