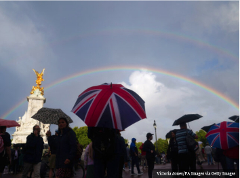 At 96 the Queen of the United Kingdom of Great Britain has died in the 70th year of her reign. Her reign was one of the most significant in recent history, as the Bible speaks of it and the end of the matter is a new king – Charles III may for today be king, but next is the Anointed king of Israel; Yeshua HaMashiach, or if you prefer Greek Iesus the Christ, born king of the Jews.

It shall come to pass in that day, that Tyre (=Rock) shall be forgotten seventy years, according to the days of one king: after the end of seventy years shall Tyre sing as an harlot. Take an harp, go about the city, thou harlot that hast been forgotten; make sweet melody, sing many songs, that thou may be remembered. And it shall come to pass after the end of seventy years, that the LORD will visit Tyre, and she shall turn to her hire, and shall commit fornication with all the kingdoms of the world upon the face of the earth.

And (then) her merchandise and her hire shall be holiness to the LORD: it shall not be treasured nor laid up; for her merchandise shall be for them that dwell before the LORD, to eat sufficiently, and for durable clothing. (Isaiah 23:15-18)

We learn from Isaiah that the inheritors of the great trading nation of Ancient Tyre, known for their desire to be on an Island, called a Rock, will have an era of 70 years of being forgotten, according to or equal to, the days of one king, then they would be a 'Harlot' for trade.

We would be keen to know this 70 years era, as after it has ended – then they will be again successful in trade and then after that all the trade will turn to be given to those who serve Yahweh Elohim in context of all of the prophecy of Isaiah, in the Kingdom of God.

This is a last days prophecy. The trade of the inheritor of Tyre must be reduced to being 'forgotten', then after 70 years be great again and then it must then be turned to benefit the God of the Bible Yahweh Elohim.

In this artcile Tarshish: India Britain in the last days we traced as Isaiah predicted how the great maritime trade of Tyre walked on its own feet to end up in Britain. In the modern nation we see in the rock of Gibraltar and the great cliffs of Dover that we may call Britain, Tyre. The word 'rock' is used multiple times of the Monarchy ("rock of stability"). We know that the ancient traders of Tyre went to plunder resources of Britain.

We see now a precise fulfilment of the passage in Isaiah in that of Elizabeth, they say her reign was according to the days of one king!

She is the longest lived of European monarchs as the Sun king was younger. The point is that all will compare her 70 years and 214 days to that of one king – significantly that 'one king' is the 'sun king' of France – a king, that like, Elizabeth had presided over an age of relative stability and advancement.

Then we may understand that 70 years reign as a way also to see the new king of the United Kingdom,

At 73, prior to his mother's passing, King Charles was the oldest heir apparent in British history, and was the first in line to the throne since 1958, making him the longest-serving Prince of Wales ever.

Then we can now look back over 70 years and understand that though Elizabeth was a stable monarch in a great Elizabethan age – the greatest nations no longer included the United Kingdom of Great Britain - but were led by America and Russia. For much of those 70 years Britain was being buried in Europe and then tied up in the European Union. At present India is overtaking Britain as the 5th largest world economy. For 70 years, we can mark exactly now, from 1952- 2022 Britain was forgotten.

The beginning of Elizabeth's reign saw the end of the British Empire. This empire was taken away as Britain had not lived up to the oath made in the Balfour declaration. This bitterness of anti-Israel sentiment lasted in Britain all of the 70 years reign, though William came offically to Israel in 2018 after US President Trump elevated Jerusalem and thawing came in the move towards the Abraham Accords.

A particularly sore point was that, despite her visits to many countries throughout her long reign, including Middle East and North African countries such as Egypt, Saudi Arabia, Qatar and Jordan, and countries with very poor human-rights records, she never visited Israel. While King Charles has visited Israel on a few occasions unofficially and her late husband Prince Philip visited his mother's grave on the Mount of Olives, the first official visit to Israel by a member of the royal family was made by Prince William in 2018.Pundit

Notwithstanding Queen Elizabeth exemplifying the anti-Israel policy British nation, she personally did much to help and honour Holocaust victims, the toll acerbated by Britain's terrible behaviour in closing the door to the Holy Land Jewish immigrants. She went beyond this and honored Jews also in Britain including Shimon Peres.

The president of Israel said "Throughout her long and momentous reign, the world changed dramatically, while the Queen remained an icon of stable, responsible leadership, and a beacon of morality, humanity and patriotism. In her life and in her service to her people, the Queen embodied a spirit of integrity, duty and ancient tradition.” - "My late mother and father had several audiences with the Queen over the years. Her fond welcome and warm hospitality left a profound impression down the generations."INN

Just before Elizabeth II died, as her last public act, she welcomes as the practical ruler of Britain another Elizabeth – Liz Truss. As we know the Name Elizabeth is about the Oath of El. To Truss something is to bind it. The Word of God is certified and bound.

The name Mary from the Hebrew name Miriam means bitter. There was bitterness in Elizabeth's reign as Alexandra a (wo)man beloved of the people. Liz Truss in modifying her name has dropped the hidden 'El' and the hidden 'bitterness', but both are there. The Oath of El is bound and the work of one Elizabeth ended to be given to another.

This new Elizabeth will be free to continue her active and warm relations with Israel, though it is yet to be seen if her pledge to review moving the British Embassy to Jerusalem will be fufilled.

The Meaning of the Double Rainbow at the Place

There was At Windsor Castle, a rainbow arched over the grounds just as the Union Jack flag began to be lowered in honor of the monarch's death. And then it vanishes, but the moment is captured by a Royal photographer for us.

Many have tried to give a sentimental meaning to the full double rainbow in the cloud recorded by multiple people over Buckingham Palace on the day Queen Elizabeth II passed away, soon after they placed the annoucement. However the Bible has one meaning only. Anything double is assured (or certain) and the Bow itself in the cloud is the 'Oath of El' or Covenant of El made to Noah (Genesis 9). We are in the new age of Noah. The covenants to all the fathers are established, but we have a new phase in their outworking.

The new king is new Charles III. Charles I is executed and Charles II is restored after the Republic of the Glorious Revolution fails. Charles means churl, rude, unhelpful, non-compliant, as the rudeness and churlishness of this age. It also means free. The complex double faced nature of freedom is explained by Peter

As free, and not using your liberty for a cloke of maliciousness, but as the servants of God. Honour all men. Love the brotherhood. Fear God. Honour the king. (1Peter 2:16-17)

So now as free in Christ, the Queen is dead we honour the King, as a ruler put in place by God (not because they are wonderful people).

What was next after the end of the 70 years? That Tyre would emerge as a Harlot. A Harlot is a woman who trades the most valuable thing she has for gain. Already we have noted that since Brexit Liz Truss has been everywhere seeking and making trade deals. We expect this to go on and that Liz Truss would lead to continue to encourage trade, even with their enemies. In her answers in her first Question Time Liz Truss repeated that she wished to create conditions to encourage investment in Britain. We expect that Britain's leadership will now go to every nation on the face of the earth- no place will be beyond their desire to reach for trade.

Why? Because Britain is chosen to turn their hire. This trade is not for Britain but for God- to set up routes to bring wealth and goods to Jerusalem. Isaiah wrote.

The kings of Tarshish and of the isles shall bring presents: the kings of Sheba and Seba shall offer gifts. (Psalm 72:10)

Tyre was forgotten 70 years – Tyre was the capital city, the trading centre of Tarshish. Tarshish was two places, Britain and India, and therefore has two rulers. Sheba and Seba are in Arabia and their leaders are Royalty. There will be multiple Royals of the last great trading nations of the Kingdoms of men, who bring gifts to the new king of the Royal house of king David in Jerusalem.

On one hand the Bible predicts all sorts of chaos – there is to be distress of nations with perplexity as Christ said (Luke 21:23-5), on the other the Harlot nation is to sing and be somewhat more successful than other nations as a Harlot for trade. Both states can be true.

It is interesting that the Elizabethan age began in 1952 in post war optimism of the chimera of 'progress' in the nuclear age and gained lustre in the 1980s, despite being 'forgotten'. As to the fine point of Isaiah's prophecy, it is said that Tyre would sing. Though much of the output of the British music industry is distressing in its banality, we cannot deny that Britain has a music industry of some stature and is singing again: they took the great Eurovision song contest from Ukraine, on Ukraine's behalf.

This is the Elizabethan Serenade written and performed at the beginning of Elizabeth's reign, and dedicated to her.