3) Tyre: Daughter of the Traders of Tarshish

Tyre was called the Daughter of Tarshish by Isaiah (c.700's BC),

Who has taken this counsel against Tyre, the crowning city, whose merchants are princes, whose traffickers are the honourable of the earth? The LORD of hosts has purposed it, to stain the pride of all glory, and to bring into contempt all the honourable of the earth. Pass through thy land as a river, O daughter of Tarshish: there is no more strength. (Isaiah 23:8-10)

Tyre is called a 'daughter' as the trade with Tarshish was the source of their wealth,

Tarshish was thy merchant by reason of the multitude of all kind of riches; with silver, iron, tin, and lead, they traded in thy fairs. (Ezekiel 27:12) and

The ships of Tarshish did sing of thee in thy market: and thou wast replenished, and made very glorious in the midst of the seas. (27:25)

There is evidence that Tyre traded in tin with Britain. Similar distinctively shaped tin ingots have been found in Britain and in a Phonecian shipwreck. In addition those metals are precisely the ones found and mined from at least 2,500 years ago in South West England. In 1992 a large oak ship suitable for carrying cargo was found at Dover and dated at 3,500 years old. It had shale from Dorset in it, and due to finds of ancient mines archaeologists suspected that it had been used to trade metal ore, and metal ingots (gold, copper, tin).

The Greeks were known for their bronze (copper combined with tin), and the most likely source was through Phonecian traders and Cornwall in England. The Great Orme copper mines in Llandudno were the largest in the ancient world, and it is likely most was mined for the trade in the Mediterranean.

Tyre was also called the daughter of Tarshish as in future, though Tyre was to perish, the traders would not perish and the nation would be relocated. Tyre was not their home, that was on the sea. Tyre was but a stronghold,

Howl, ye ships of Tarshish: for your stronghold is laid waste. (Isaiah 23:14)

Isaiah is pointing to Tyre being greater than the isle of Phoenicia, and continuing. It is said,

Pass ye over to Tarshish; howl, ye inhabitants of the isle. Is this your joyous city, whose antiquity is of ancient days? her own feet shall carry her afar off to sojourn Who has taken this counsel against Tyre, the crowning city, whose merchants are princes, whose traffickers are the honourable of the earth? (Isaiah 23:6-8)

Where the merchants went they would not stay, but merely 'sojourn'

And he said, Thou shall no more rejoice, O thou oppressed virgin, daughter of Zidon: arise, pass over to Chittim; there also shall thou have no rest. (Isaiah 23:12)

Chittim is a plural word in Hebrew, and is not one place but many. According to Josephus, "all islands, and the greatest part of the sea-coast, are called Chethim (Kittim) by the Hebrews." http://bibleatlas.org/kittim.htm

This is likely as Kittim was of the sons of Japheth and brother to Tarshish. If they spread out over the isles from the beginning, by the time of Josephus they would have been very scattered. It is likely they include the Macedonians, Greeks and Latins. It is sure that they are at least found on Cyprus, having founded a city named Kition (Citium). 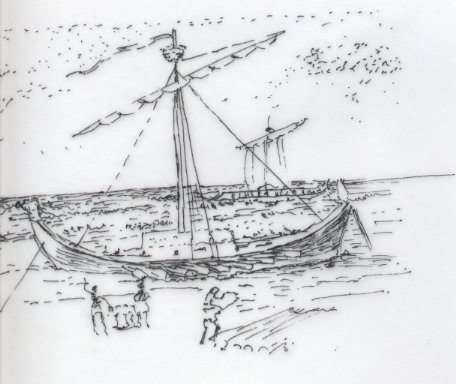 The stronghold of Alexandria

History shows that the trade of Tyre was inherited by the coast city established by Alexander the Great in 331BC. The trade gained “feet” of its own and sojourned in Alexandria and made Alexandria the greatest city of its era by the first Century.

Alexandria had sophisticated and formidable means to defend its maritime trade. It seems to have been a tolerant multi-national city with Jews also having a large presence. But as the prophecy indicates it was not to last. The Jewish wars with Greece, then civil disturbance in 215 led to all the males being killed. Then in 365 the city was destroyed by an earthquake on Crete which caused a tsunami. Since then the old city has, like Tyre, subsided under the waters. The feet of the traders took trade away to a new city.

The place of the lagoon dwellers (by Hebrew definition, Kittim) became a refuge for disaffected Romans in 421, and its new ports attracted trade. It continued to grow in influence conquering other islands including most in the Aegean and forming the naval fleet of the Venetian Arsenal to defend its merchant fleet to control trade. It took over the salt trade by the 12th century (trade with Britain). The city was republican with its citizens having some power, but the state was not religiously fanatic and made no execution for religious heresy (coming in conflict with the Papacy). They adopted the printing press early and became the leading printer and invented paperbacks. But once again the trade was to move – 'on her own feet'- and Venice declined. They lost to the Ottomans, then they lost monopoly on trade when Portugal found a sea route to India. Here we have a key, as the trade of Tarshish, with India specifically, took itself to Lisbon.

Lisbon was an ancient coastal city, and Phonecian remains have been found. As Venice declined Lisbon entered a golden age of international trade in the 16th Century, but it was short lived. Spain conquered Lisbon. Then in 1755 an earthquake and tsunami destroyed the city. And trade walked to another city; Amsterdam.

The golden age of this city was in the 1700's. It was thought of as the first capitalist city, inventing the stock exchange and insurance. As in other cases the population of the city rapidly increased as the traders moved in. Significantly their trading arm was the Dutch East India company. In the steps of their trade was Britain. And trade went to Britain when in 1795 William V of Orange fled to England.

In the 1600’s the East India Company and the Virginia Company had only just been set up to compete with the more powerful French in India and North America respectively. In 1784 the British Merchants began to rule India. Britain’s role as the Merchants of Tarshish was not evident until the East India Company seized power. From that point until WW2 there is no doubt who was the global merchant nation, with Britain by far beyond others dominating the waves.

Britain's role as the modern Tarshish became more clear when Queen Victoria was made Empress of India by Disraeli in 1877, wearing a dual crown.

India, as part of the commonwealth served, and helped the British defeat the Ottomans. The means of offering the declaration of a homeland for Jews in the British mandate was the role of the nation's horses. Isaiah says,

Tarshish, Pul, and Lud, that draw the bow, to Tubal, and Javan, to the isles afar off... they shall declare my glory among the Gentiles. And they shall bring all your brethren for an offering unto the LORD out of all nations upon horses, and in chariots, and in litters, and upon mules, and upon swift beasts, to my holy mountain Jerusalem, saith the LORD, as the children of Israel bring an offering in a clean vessel into the house of the LORD. (Isaiah 66:20 KJV)

At Beersheba, it was the efforts “upon horses” that allowed those “of the isles afar off” to start to bring the brethren “out of all nations”. The Commonwealth push to Jerusalem featured work upon a huge number of horses, 50,000 and also upon 10,000 mules (Paterson, 1921).

Watchman what of the night? Part 4

With Britain's PM Cameron visiting Turkey, India and the United States we are seeing a revival of Britain's role in the Middle East, specifically in relationship to strengthening of a historic role in the Gulf states. This is linked to their role as a global merchant nation and the revival of London as the centre of world finance.