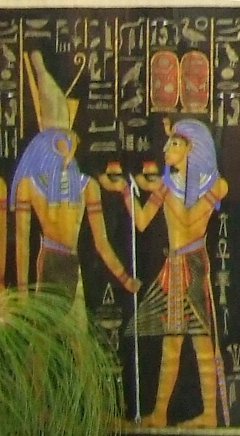 This article is in response to a question that has been posed by a reader who asks if there is any relationship between Isaiah 19 and the present situation in Egypt today. There are definitely historical applications that can be made in relation to Isaiah 19, but there also appears a very possible prophecy in regard to Egypt's ultimate role in the last days, in our days.

Isaiah 19 commences with a warning of an impending devastation

The burden of Egypt. Behold, the LORD rideth upon a swift cloud, and shall come into Egypt: and the idols of Egypt shall be moved at his presence, and the heart of Egypt shall melt in the midst of it.

Historically there were civil wars, that can relate to the prophecy, between the Egyptian rulers Apries and Amasis. The nation was being warned of the impending invasion by Nebuchadnezzar. There is no doubt that the Egyptians did face a time of trouble which did cause fear so that the heart of Egypt did “melt”.

The following verses in Isaiah then depict the devastation and hardship that the Babylonian forces would bring to Egypt, socially and economically. (Isaiah 19:5-16)

However verse 16 begins a section that commences with the words “in that day”. What day is this?

In that day shall Egypt be like unto women: and it shall be afraid and fear because of the shaking of the hand of the LORD of hosts, which he shakes over it. (Isaiah 19:16)

Then Isaiah 19:17 introduces a new aspect.

And the land of Judah shall be a terror unto Egypt, every one that makes mention thereof shall be afraid in himself, because of the counsel of the LORD of hosts, which he has determined against it. (Isaiah 19:17)

This is where we pause and consider carefully the statement that Judah would be a terror to Egypt. It could be said that the gathering Babylonian forces in Judah could be seen by the Egyptians as a sign of the impending invasion of their own nation. However there could be more to it than this. In Isaiah 11 and Isaiah 12 the same phrase is used.

And in that day there shall be a root of Jesse, which shall stand for an ensign of the people; to it shall the Gentiles seek: and his rest shall be glorious. And it shall come to pass in that day, that the Lord shall set his hand again the second time to recover the remnant of his people, which shall be left, from Assyria, and from Egypt, and from Pathros, and from Cush, and from Elam, and from Shinar, and from Hamath, and from the islands of the sea.

And he shall set up an ensign for the nations, and shall assemble the outcasts of Israel, and gather together the dispersed of Judah from the four corners of the earth.(Isaiah 11:10-12)

Consider the context of these verses and indeed the whole of Isaiah 11. The root of Jesse is the Messiah, Y'shua the son of David and the hope of salvation for Jews and Gentiles. These verses speak of the the gathering of the remnant of the Jews from many nations from the four corners of the earth. When did this occur? The process began in the late nineteenth century and culminated in the formation of the nation of Israel in 1948 and the freeing of Jerusalem from Gentile rule in 1967. Isaiah 11 also depicts a time of peace in verse 9. “They shall not hurt nor destroy in all my holy mountain: for the earth shall be full of the knowledge of the LORD, as the waters cover the sea.”
The phrase “in that day” is repeated another five times in Isaiah 19 in verses 18, 19, 21, 23 and 24.

In context there has been no historical situation that can be found to fit the descriptions given the events described.

Consider Isaiah's use of the phrase in Isaiah 12

And in that day you shall say, O LORD, I will praise thee: though thou were angry with me, thine anger is turned away, and thou comforted me. Behold, God is my salvation; I will trust, and not be afraid: for the LORD YAHWEH is my strength and my song; he also is become my salvation.

Therefore with joy shall ye draw water out of the wells of salvation. And in that day shall ye say, Praise the LORD, call upon his name, declare his doings among the people, make mention that his name is exalted. Sing unto the LORD; for he has done excellent things: this is known in all the earth. Cry out and shout, thou inhabitant of Zion: for great is the Holy One of Israel in the midst of thee.

Again the chapter ends i na way that shows it is a time of salvation.

Returning to Isaiah 19 the concluding section shows Egypt's part in that time of salvation. The Egyptians will know the language of Israel, there will be “an altar to Yahweh”, and they shall cry unto Yahweh, who will send them a saviour. Verse 24 concludes with the peace that will exist among Israel, Egypt and Assyria.

Isaiah 19:22 does say that Yahweh will smite Egypt first before the final peace. It is here that we are possibly seeing the beginning of the process that will bring Egypt peace. We have seen the civil upheaval in Egypt, which verse 2 of Isaiah 19 could be said to aptly describe

In relation to environment and the health of the River Nile, the Aswan Dam has reduced the volume of water reaching Egypt. If the Ethiopians are beginning to build a dam also, there could be further degradation of the water supply to Egypt. This could bring future hardship and famine to Egypt.

Isaiah 19 describes the disastrous damage to the Nile and its effects upon Egypt.

And the waters shall fail from the sea, and the river shall be wasted and dried up. And they shall turn the rivers far away; and the brooks of defence shall be emptied and dried up: the reeds and flags shall wither.

The paper reeds by the brooks, by the mouth of the brooks, and every thing sown by the brooks, shall wither, be driven away, and be no more. The fishers also shall mourn, and all they that cast angle into the brooks shall lament, and they that spread nets upon the waters shall languish.

Moreover they that work in (fine) combed/ carded, and they that weave white (noble), shall be confounded. And they shall be broken in the purposes thereof, all that make sluices and ponds for fish. (Isaiah 19:5-10)

Many Egyptians still weave baskets in the tradinatonal manner and require Halfa grasses, papyrus, reeds or palm leaves to do sohttp://www.touregypt.net/featurestories/basketry.htm. In the modern world, thought flax is not evident for clothing, Egyptian cotton, which is a long fibre and therefore strong and soft, is highly sought after. (touregypt.net) and textile manufacture is a considerable sector of the economy (being a quarter of non-oil exports). Textile weaving in Egypt with the new long fibre cotton in the modern world began with Mehemet Ali in 1822.

The Nile and groundwater is now critical again for ponds for fish. thefishsite.com

This shows a fish pond being filled from the Nile flickr.com/photos/theworldfishcenter/

Isaiah 19 speaks of a “cruel lord” (v4). We have yet to see a cruel ruler take control in Egypt before the day of their salvation comes. There are other passages that describe a strong leader who will come from the north and overthrow many countries and “the land of Egypt shall not escape”. Daniel 11 specifies the time and states:

At the time of the end shall the king of the south push at him: and the king of the north shall come against him like a whirlwind, with chariots, and with horsemen, and with many ships; and he shall enter into the countries, and shall overflow and pass over. He shall enter also into the glorious land, and many countries shall be overthrown: but these shall escape out of his hand, even Edom, and Moab, and the chief of the children of Ammon. He shall stretch forth his hand also upon the countries: and the land of Egypt shall not escape. (Daniel 11:40-42) (Ezekiel 38 also describes a great northern confederacy in the “latter years”.that will invade the Middle East)

The following chapter in Daniel gives us more detail. It will be “a time of trouble, such as never was since there was a nation even to that same time”. He gives more detail prophesying that “the children of Daniel's people, that is Israel, would be delivered and saved. It would be the time of salvation for the righteous. The world today is a world in great trouble as we all can see.

And at that time shall Michael stand up, the great prince (the Messiah) which stands for the children of thy people: and there shall be a time of trouble, such as never was since there was a nation even to that same time: and at that time thy people shall be delivered, every one that shall be found written in the book. And many of them that sleep in the dust of the earth shall awake, some to everlasting life, and some to shame and everlasting contempt. (Daniel 12:1-2)

We also have the closing words of Isaiah 11, which further add to the vision of a future age, where the physical earth is transformed by the earthquake of Zechariah 14..

And the LORD shall utterly destroy the tongue of the Egyptian sea; and with his mighty wind shall he shake his hand over the river, and shall smite it in the seven streams, and make men go over dryshod. And there shall be an highway for the remnant of his people, which shall be left, from Assyria; like as it was to Israel in the day that he came up out of the land of Egypt. (Isaiah 11:15-16)

There will be a blessing for Egypt as prophesied in Isaiah 19, when they like many other nations acknowledge Yahweh the God of Israel as the Creator and power in all the earth and the only source of salvation.

Whom the LORD of hosts shall bless, saying, Blessed be Egypt my people, and Assyria the work of my hands, and Israel mine inheritance. ( Isaiah 19:25)

Watchman, what of the night?

Isaiah 20 might be read and passed over. It seems at first glance about events which are totally historical. From this prophecy Isaiah's reputation as a prophet was established in his own lifetime, as it was fulfilled in his lifetime. For this reason alone it is important. In the prophecy Isaiah acted out the events. Let us pause and consider what this acting out might indicate.

What do we make of hurricanes, cyclones and massive rain events that lead to regional flooding, or other extreme weather? What do we make of sporadic civil disorder? They are not merely connected by the current conjunction of extreme weather, including dramatic flooding in Brazil, snowstorms and a category 5 Cyclone in Australia (Hurricane) and unrest in Egypt and the Middle East. The following is a rather profound argument from a theory of mathematics, which implies the Power of God over our lives at every level.