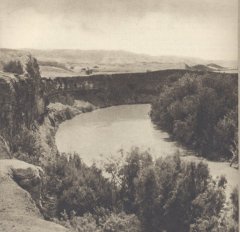 Isaiah 20 might be read and passed over. It seems at first glance about events which are totally historical. From this prophecy Isaiah's reputation as a prophet was established in his own lifetime, as it was fulfilled in his lifetime. For this reason alone it is important. In the prophecy Isaiah acted out the events. Let us pause and consider what this acting out might indicate.

Records of Assyria show when Tartan came to Ashdod, which has been dated at 711BC. Archaeologists in excavations at Ashdod have found a Basalt Stela of Sargon II at Ashdod noting his conquests and confirming Isaiah's statement he took the city. The prophecy that the Egyptains and Ethiopians would be led away barefoot was was fulfilled in Isaiah's lifetime when Esarhaddon (son of Sennacherib) in a campaign conquered Egypt in the year dated by historians as 671BC . Esarhaddon called himself king of 'Egypt, Pathros and Kush' and made a victory stele. The Egyptians rebelled but were oppressed again when he returns in 669BC, but he dies that year.

The point of the prophecy is that the inhabitants of the coasts of Israel ask a question,

And the inhabitant of this coast (in context, Ashdod) shall say in that day, Behold, such is our expectation, whither we flee for help to be delivered from the king of Assyria: and how shall we escape? (Isaiah 20:6)

The reason for the question is that,

they shall be afraid and ashamed of Ethiopia their expectation, and of Egypt their glory. (Isa 20:5)

Already they were ashamed as Egypt had come to help Ashdod with Edom, Moab and also Judah, and still they lost to Assyria.

Isaiah's prophecy concerns the nations, specifically a witness about Egypt and Kush

And the LORD said, Like as my servant Isaiah has walked naked and barefoot three years for a sign and wonder upon Egypt and upon Ethiopia; (Isa 20:3)

The question that may be asked in retrospect is, 'why three years', when the affliction of Esarhaddon's captivity was one event? Why ask a prophet to expose himself even to cold and to wonder for 3 years on what seems a simple point? In context it seems that he was walking barefoot about the beginning of Hezekiah's reign. After Sargon II takes Ashdod he turns to take Babylon the next year and rules from Babylon. When Isaiah put back on his sackloth clothing and shoes Sargon II marries his son Sennacherib to an Aramic noblewoman. From this union came Esarhaddon.

The ascension of Hezekiah may have required a more extraordinary witness. The conquest of Babylon might underline the eclipse of Egypt, but they still do not explain why Isaiah put on such a show. Then also, why such an ordeal for Isaiah when there is no reference to Israel and Judah? It is 'the coasts' that fear.

Not long after Judah's king Ahaz dies Isaiah writes of Moab, who was also involved fighting Assyria at Ashdod,

But now the LORD has spoken, saying, Within three years, as the years of an hireling, and the glory of Moab shall be contemned, with all that great multitude; and the remnant shall be very small and feeble. (Isaiah 16:14)

It seems unlikely that the prophecy of 3 years illustrated the other as Isaiah's three years of naked witness is not related to hire, but to captivity and slavery. The connection might be that 3 years is the time of hire so Isaiah was 'hired' by God as a witness.

It may just be that the 3 years was needed to make the witness plain regarding Egypt and Ethiopia.

But what if we may parallel Isaiah's actions with Ezekiel's where a day stood for a year? (Ezekiel 4:6) Three years is then 3 x360 days or 1080 prophetic years.

This is a large slab of time. Do three prophetic years, 1080 days, of Egyptian and Ethiopian servitude fit directly from 671BC? From 671BC, 1080 years ends in 409AD. In that era Egypt rose again and became the King of the South against the Greco-Roman king of the North in a battle for the coasts. At that time the Assyrians were in eclipse, even their culture Hellenised.

Did an Assyrian-like power oppress both Egypt and Ethiopia for a long time in the era since? As the prophecy featured comment by the people of the coast of the Levant, the Philistines, or in modern terms Palestine. We might look for the 1080 years to begin after this name 'Palestine' became used for the whole area where Isaiah witnessed..