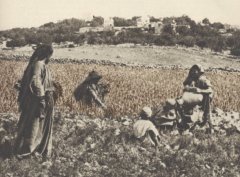 To keep in remembrance the blessing that Yahweh had promised the people of Israel, Aaron and his sons were to pronounce Yahweh's blessing on the people of Israel. It was a prayer that Yahweh would grant them peace, be gracious unto them and that Yahweh would place his name upon “the children of Israel”. That is, he would acknowledge them as his chosen people if they worshipped Yahweh in the way appointed. To reinforce this they bore Yahweh's name of “El” in their national name. That is Israel was to be a “prince with El”.

And the LORD spoke unto Moses, saying, Speak unto Aaron and unto his sons, saying, On this wise you shall bless the children of Israel, saying unto them, The LORD bless thee, and keep you: The LORD make his face shine upon you, and be gracious unto you: The LORD lift up his countenance upon you, and give you peace. And they shall put my name upon the children of Israel; and I will bless them. (Numbers 6:22-27)

The nation was in a terrible state, when none would call blessing on others

Yahweh promised Israel that they would be blessed and set above the nations if they listened “diligently unto the voice of the LORD thy God, to observe and to do all his commandments”. (Deuteronomy 28:1-2) The blessings were conditional upon their obedience to Yahweh's commands and their faithfulness. The blessings were related to aspects of every day life such as safety in their cities and fruitfulness in their labour in the fields and the produce of their flocks and cattle. (Deuteronomy 28: 3-6, 8) Their enemies that threatened them would “be smitten before thy face: they shall come out against thee one way, and flee before thee seven ways.”(Deuteronomy 28 :7)

The nation of Israel were identifiable by their belief in ONE God and dwelt among nations which were noted for idolatry and immorality. Israel is a name that incorporates the name of a title of Yahweh Elohim, 'El'. 'Israel' is then 'have power with El', a 'prince with El'. If Israel remained faithful and obeyed Yahweh's commands, “the LORD (Yahweh) shall establish thee an holy people unto himself”. (Deuteronomy 28 ;9).

The nation was to be a witness to the power of Yahweh to all people of the earth. The following quotation shows the nature of the blessings that would be bestowed on Israel conditional on their faith and obedience to Yahweh's commands.

The nation of Israel did not ultimately fulfil their obligations and this resulted in their destruction as a nation and their dispersal among the nations until the time of the end of the rule of their nations.

Perhaps Solomon is seen by Bible students as a man who was given great blessings. He was given wisdom, which he requested, but in addition he was granted wealth and honour.

In Gibeon the LORD appeared to Solomon in a dream by night: and God said, Ask what I shall give thee. And Solomon said, Thou hast showed unto thy servant David my father great mercy, according as he walked before thee in truth, and in righteousness, and in uprightness of heart with thee; and thou hast kept for him this great kindness, that thou hast given him a son to sit on his throne, as it is this day. And now, O LORD my God, thou hast made thy servant king instead of David my father: and I am but a little child: I know not how to go out or come in. And thy servant is in the midst of thy people which thou hast chosen, a great people, that cannot be numbered nor counted for multitude. Give therefore thy servant an understanding heart to judge thy people, that I may discern between good and bad: for who is able to judge this thy so great a people?

And the speech pleased the Lord, that Solomon had asked this thing. And God said unto him, Because thou hast asked this thing, and hast not asked for thyself long life; neither hast asked riches for thyself, nor hast asked the life of thine enemies; but hast asked for thyself understanding to discern judgement; Behold, I have done according to thy words: lo, I have given thee a wise and an understanding heart; so that there was none like thee before thee, neither after thee shall any arise like unto thee. And I have also given thee that which thou hast not asked, both riches, and honour: so that there shall not be any among the kings like unto thee all thy days. (I Kings 3:5-13)

However, this wealth and honour may have appeared as a great blessing, but in effect it became a testing of faith and ultimately a stumbling block for Solomon.

And Solomon did evil in the sight of the LORD, and went not fully after the LORD, as did David his father. Then did Solomon build an high place for Chemosh, the abomination of Moab, in the hill that is before Jerusalem, and for Molech, the abomination of the children of Ammon. And likewise did he for all his strange wives, which burnt incense and sacrificed unto their gods. And the LORD was angry with Solomon, because his heart was turned from the LORD God of Israel, which had appeared unto him twice, And had commanded him concerning this thing, that he should not go after other gods: but he kept not that which the LORD commanded.

Wherefore the LORD said unto Solomon, Forasmuch as this is done of thee, and thou hast not kept my covenant and my statutes, which I have commanded thee, I will surely rend the kingdom from thee, and will give it to thy servant. Notwithstanding in your days I will not do it for David your father's sake: but I will rend it out of the hand of your son. (I Kings 11:6-12)

The Bible, as no other book, is layered in rich detail, with every page speaking of salvation. Real events of the life of Ruth recorded in the Bible, remarkably, show the pattern of redemption.

Why we have a rainbow: its origin & meaning

If we think of the science we may miss the meaning

Great promises have been recorded in the Bible as having been made to individuals. Knowing these is the key to understanding the whole Bible.