Why we have a rainbow: its origin & meaning

The rainbow features in such fanciful songs such as 'Over the Rainbow' and in children's art. A rainbow is beautiful being transient and aesthetically pleasing, but it is also meaningful.

Scientifically, the rainbow was explained by no less than Sir Isaac Newton. His explanation of how a ray of light is diffracted into the colours through a glass prism helped us understand light itself.

While the science helps us understand light, the origin of the rainbow gives us its meaning.

We might miss just how meaningful the rainbow is, and how beautiful.

The Cause of the Rainbow: the response to Noah's actions

Noah was a special man. His father Lamech was a prophet saying at the birth of Noah, his son,

“This same shall comfort us concerning our work and toil of our hands, because of the ground which the LORD has cursed” (Gen 5:28-29)

Noah's name means “comfort”. Lamech says Noah will be the source of comfort.

Noah is obedient to God in building the Ark. After the flood waters recede he waits in the ark obediently until he is told to come out. Then he does something quite unexpected.

He takes of the precious animals, of the clean ones (of which there were 7), and kills and offers of each type on an altar to God. This voluntary offering, of what were now very precious animals, due to the destruction of all others, must have pleased God.

And the LORD smelled a sweet savour; and the LORD said in his heart, I will not again curse the ground any more for man's sake; for the imagination of man's heart is evil from his youth; neither will I again smite any more every thing living, as I have done. (Gen 8:21)

As a result of Noah's obedience and willing sacrifice God gives us all a covenant, a binding contract,

And I, behold, I establish my covenant with you, and with your seed after you; (Gen 9:9)

The covenant is even extended to all the animals in the ark!

And this is the covenant of the “sweet savour”, of the voluntary offering made by Noah,

The words of the covenant were written for us and nearly every person on the face of the earth can still read it if they choose, but in addition a token (a flag, a monument or sign) was given

And God said, This is the token of the covenant which I make between me and you and every living creature that is with you, for perpetual generations: (Gen 9:12)

I do set my bow in the cloud, and it shall be for a token of a covenant between me and the earth. (Gen 9:13)

The 'laws' may not be unchangeable. Did the Creator change the physical 'laws' to create the diffraction of visible light? Certainly the Creator is actively involved in bringing us clouds,

And it shall come to pass, when I bring a cloud over the earth, that the bow shall be seen in the cloud: (Gen 9:14)

And I will remember my covenant, which is between me and you and every living creature of all flesh; and the waters shall no more become a flood to destroy all flesh. (Gen 9:15)

In case we miss it, after God has put the bow in the particular cloud we see, then God himself will look at that rainbow, and remember his own covenant.

And the bow shall be in the cloud; and I will look upon it, that I may remember the everlasting covenant between God and every living creature of all flesh that is upon the earth. (Gen 9:16)

And God said unto Noah, This is the token of the covenant, which I have established between me and all flesh that is upon the earth. (Gen 9:17)

The Meaning of the Rainbow is -the Gospel

By understanding the physical rainbow we have understood the physical nature of light. But there is much more.

When we look on a rainbow God is looking at that rainbow too. When he looks he remembers his covenant. When we, as individuals, look at a rainbow and we remember also this same covenant there is a meeting of minds.

When we look on a rainbow we first remember an obedient man of whom it was prophesied he would bring 'comfort', who made a voluntary sacrifice in which God was well pleased. This resulted in a pledge to preserve the earth. This is the gospel. The gospel has two parts, the salvation as a result of an obedient man and the promise of the kingdom on an earth where there is no more curse (Isaiah 51:3, Rev22:3). 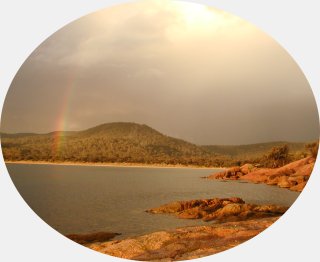 If this is not enough, the sign itself is symbol of the process of salvation. We see God is the light (I John 1:5). We see humans 'drawn out' (or separated) from the 'sea' of nations (Acts 15:14) to form 'clouds' and God's glory shines as spiritual enlightenment through them, as the rain from the cloud comes down on the earth in 'showers' of blessing (Psalm 72:6, Rev.5:9-10). When we see this, then we see the meaning of the rainbow, the immense beauty of the promise of the first covenant

a covenant - of an everlasting creation on earth

For the earth shall be filled with the knowledge of the glory of the LORD, as the waters cover the sea. (Numbers 14:21, Habbakuk 2:14)

Failure of Saul & the deliverer Jonathan: The redemption pattern

The Bible is full of the redemption pattern, the pattern of salvation in Yeshua. The account given in 1 Samuel 13 and 14 at first reading appears a very frank account of a messy event 2 years into the reign of Saul.

The Bible, as no other book, is layered in rich detail, with every page speaking of salvation. Real events of the life of Ruth recorded in the Bible, remarkably, show the pattern of redemption.