Throughout history, despite anarchy and evil, when the ways of truth and righteousness are abandoned, there are those who remain faithful. During the time of the Judges, there was no renunciation of Yahweh, no public atheism, but there was something more insidious and dangerous. God was retained as a sign or symbol, but there was no recognition of Yahweh as King. Israel maintained a form of religion, but rejected their King.

Ruth, a gentile and from a despised race, not only found a place in Yahweh’s plan of salvation, but as David’s great-grandmother was in the line through which the future Redeemer and King of mankind was to come.

The worst famine is a lack of obedience to the Word, as in the days of the Judges in Israel. Elimelech’s leaving Bethlehem foreshadows the dispersion of Israel. Elimelech’s name is significant in that it means “my king is God (El)”. His family found no relief in Moab, where Elimelech and his two sons died. In Elimelech’s two sons, Chilion (‘pining’ or ‘wasting’) and Mahlon (‘sickly’ or ‘weak’), there can be seen a future vision of the two divisions of Israel that would go into captivity and exile.

A Stranger takes hold of the Hope of Israel

Ruth, whose name signifies ‘to pasture a flock’ or ‘to nourish’ identified herself with Naomi and thus with the hope of Israel. These two women came together to the land of the covenant. In type, they made up the true Israel, comprising faithful Jews and Gentiles. The Hebrew word ‘shawb’, which is translated ‘returned’, ‘turn back’ or ‘go back’ occurs twelve times in chapter one of the book of Ruth. This stresses the importance of the concepts that are being developed in the book. Naomi and Ruth were returning to the land at the time of the barley harvest, the early spring, which is about the time of the Passover. 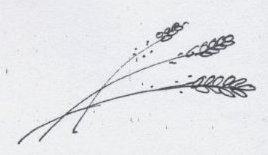 The section of this book, which is to be focussed on in this article, is chapter two. In this chapter, Boaz can be seen as a type of the Messiah, the Redeemer. Ruth, as a type of the Gentile congregation (ecclesia), gleans in the fields of Israel. She is not idle, nor does she lament her lot in life. She does not want the charity of idleness, but takes the opportunity to provide for her needs and those of her mother-in-law.