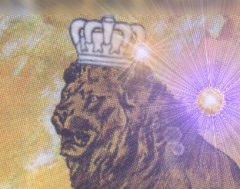 In just nine verses Psalm 149 creates a vision of events related to the coming kingdom, which will be established on this earth when the Messiah returns to rule this earth in righteousness. This Psalm in those few verses encapsulates much of Yahweh's plan and purpose with this earth.

Verse 1: Praise the LORD! Sing to the LORD a new song, his praise in the assembly of the godly!

At that time, the faithful will praise their God. It will be a new age, when the Creator will be worshipped according to His commands.

Verse 2: Let Israel be glad in his Maker; let the children of Zion rejoice in their King!

Verse 3: Let them praise his name with dancing, making melody to him with tambourine and lyre!

The nation of Israel will be free from persecution and oppression and verse 2 presents a prayer that the 'children of Zion' will rejoice in Yahweh and be 'joyful in their King' and they will 'praise His name.' (verse 3) The Jewish nation will acknowledge their God and recognise and accept their Messiah, who will be king in Jerusalem.

Verse 4: For the LORD takes pleasure in his people; he adorns the humble with salvation.

Verse 5: Let the godly exult in glory; let them sing for joy on their beds.

Verse 6: Let the high praises of God be in their throats and two-edged swords in their hands,

The faithful and chosen, both Jew and Gentile, will be granted immortality as shown in verse 4. 'He will beautify the meek with salvation' and those who are accepted by our Lord will rejoice and be 'joyful in glory.' (verse 5) However, not only do the Saints praise Yahweh, they also have a two-edged sword' in their hand in preparation for war. (verse 6)

Verse 7: to execute vengeance on the nations and punishments on the peoples,

Verse 8: to bind their kings with chains and their nobles with fetters of iron,

Verse 9: to execute on them the judgment written! This is honor for all his godly ones. Praise the LORD!

The Saints have work to do. They will 'execute vengeance' and 'punishments' on the heathen. (verse 7) They will subdue those who oppose the Lord, conquer the nations and bind 'their kings with chains' and 'their nobles with fetters of iron.' (verse 8)

The judgement of the nations has been repeatedly prophesied of by the prophets in their writings. In the vindication of Yahweh and the execution of 'the judgement written,' we are told that 'this honour have all His Saints.' (verse 9) There will be a time of judgement and warfare to bring the nations into subjection.

It is then that the earth will be filled with the glory of Yahweh and men will rejoice and praise His name. In these few verses the Psalmist has created a vision of the future, an explanation of Yahweh's purpose with man and the earth, which will reflect His omnipotent power, majesty and glory.

For more The kingdom of God

Blessed are the meek: for they shall inherit the earth, Matthew 5:5

This quotation deals with two issues, “the meek” and “inheriting the earth”. The Old Testament gives a lot of detail about the qualities that define “meekness”. The first things that come to mind about a meek person are quietness, gentleness and possibly weakness. But the Old Testament is very explicit about the qualities a meek person should have or develop and these are quite surprising.

Whoso is wise and will observe

There is a lot of foolishness in human philosophy. We will gain no wisdom from contemplating God as an abstract proposition. There is a simple Psalm, a song for teaching, which is a summary of human dealings with God. It is a song of wisdom.