4) The significance of the palm

There is a palm tree that symbolises Judah. The whole Jordan valley was full of palm trees at the time of the Roman arrival. But after AD70 the trade in Judean dates ended. Recently in a remarkable case, which is highly symbolic, the ancient Judean date palm was regrown.

Prized for its beauty, shade, and medicinal properties, the cultivar was thought to have become extinct sometime around AD 150. However, in 2005, a preserved 2,000-year-old seed sprouted... (The university of Zurich confirmed the seeds dated from between 155 BC to AD 64). ..It was at the time the oldest known human-assisted germination of a seed... The palm, named Methuselah.. was about 1.5 m (5 ft) tall in June 2008. As of November 2011, it is reported at 2.5m height...

A recognized symbol of the Kingdom of Judea.

The palm may be crossbred with its closest living relative, the Hiyani date from Egypt, to generate fruit by 2022.

The book Plants of the Bible by Michael Zohary states: “The Hebrew word for the date palm is ‘tàmâr.’ . . . It became the Jews’ symbol of grace and elegance and was often bestowed by them to women.” For example, Solomon’s beautiful half sister was named Tamar.

The revival of the tree of Judah in Israel is at the national level of its significance.

But there is an individual level of the palm tree's significance which is suggested in the Psalms.

The righteous shall flourish like the palm tree: he shall grow like a cedar in Lebanon. Those that be planted in the house of the LORD shall flourish in the courts of our God. They shall still bring forth fruit in old age; they shall be fat and flourishing; (Psalm 92:12-14)

By an interesting co incidence the date palm tree has a parallel to human life. They require tender care when they are young. They are male and female. They don't bear until about 17 (2022-2005 from the above). Their best bearing years for fruit are at age 30, and they might live up to 100 years, bearing fruit for that time. The branches live 7 years, which is similar to the life of a human cell. The lesson from the date palm is that they do not bear fruit if not constantly receiving daily hundreds of litres of water, in excess of rainfall. The righteous require the water of the word, and by that they flourish.

It seems this parallel might be given a symbolic representation in the construction of the roof. Ezekiel mentions seeing the palm trees ten times.

The palm is seen as beautiful,

How fair and how pleasant art thou, O love, for delights! This thy stature is like to a palm tree (tamar), and thy breasts to clusters of grapes. I said, I will go up to the palm tree, I will take hold of the boughs thereof: now also thy breasts shall be as clusters of the vine, and the smell of thy nose like apples; (Song 7:6-8)

But it is also known for its many uses. A Persian song of the Chaldean period listed 360 uses of the palm tree (Seignobos, Charles- The world of Babylon, Nineveh and Assyria. Leon Amiel, New York, Paris). It was mentioned in Joel 1:9-12 after the vine, fig and pomegranate, which shows it was an important source of food, also such things as thatching and brooms. It was an exemplar of beauty and utility combining.

And she dwelt under the palm tree of Deborah between Ramah and Bethel in mount Ephraim: and the children of Israel came up to her for judgment. (Judges 4:5)

Individuals might dwell under vines and fig trees (1 kings 4:25), but the judge of Israel dwelt under a palm tree. This again is points to the Temple of the future where the nations would be judged. There would be some purpose in that great structure about the inner structure, also on the wall. Traditionally judgment occurred at the gates.

Her husband is known in the gates, when he sits among the elders of the land. (Proverbs 31:23)

Open to me the gates of righteousness: I will go into them, and I will praise the LORD: This gate of the LORD, into which the righteous shall enter. (Psalm 118:19-20)

The LORD loves the gates of Zion more than all the dwellings of Jacob. Glorious things are spoken of thee, O city of God. Selah. (Psa 87:2-3)

And again David's role at the gates, that they will not just be for judgment but also praise in teaching,

Have mercy upon me, O LORD; consider my trouble which I suffer of them that hate me, thou that liftest me up from the gates of death: That I may shew forth all thy praise in the gates of the daughter of Zion: I will rejoice in thy salvation. (Psalm 9:13-14)

Enter into his gates with thanksgiving, and into his courts with praise: be thankful unto him, and bless his name. (Psalm 100:4) 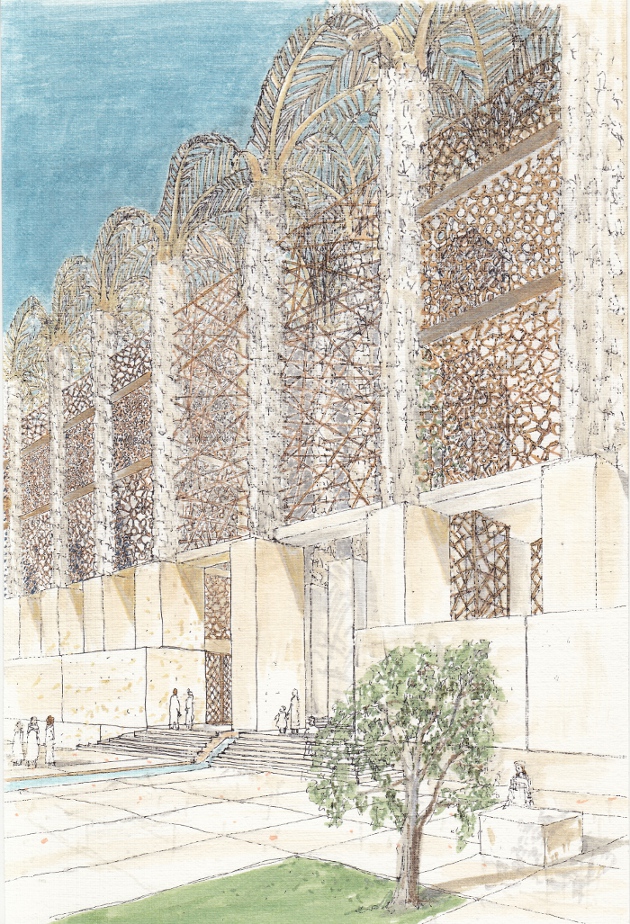 Again, and again we have the sense that the gates are very important.

A Song of degrees of David. I was glad when they said unto me, Let us go into the house of the LORD. Our feet shall stand within thy gates, O Jerusalem. (Psalm 122:1-2)

In Ezekiel 'Doors' might be rendered 'openings', and it does seem that the perimeter structure has a wall, but the gates are not closed, but always open, except the Eastern one,

And the sons of strangers shall build up thy walls, and their kings shall minister unto thee: for in my wrath I smote thee, but in my favour have I had mercy on thee. Therefore thy gates shall be open continually; they shall not be shut day nor night; that men may bring unto thee the forces of the Gentiles, and that their kings may be brought. (Isaiah 60:10-11)

And the gates of it shall not be shut at all by day: for there shall be no night there. And they shall bring the glory and honour of the nations into it. (Rev 21:25-26)

If so we can see the kings of the nations coming and going all the time to these grand chambers under the palm trees over the gates. Is it there are 12 gates (Rev 21:21)? It might be 12 plus a centre gate. It might be solved if the Eastern side only has one gate, and the other sides have 12 each. It's a minor point. We don't know as, except regarding a symbolic building in Revelation, we are not told.

David sought a role he was promised,

For a day in thy courts is better than a thousand. I had rather be a keeper of the threshold (as the Hebrew implies) in the house of my God, than to dwell in the tents of wickedness. (Psalm 84:10)

It might be fitting that just as a Sukkah, the 'roof' over the gates shows it is open to the sky (though there is no reason to preclude the use of glass), as it would remind people,

For the LORD God is a sun and shield: the LORD will give grace and glory: no good thing will he withhold from them that walk uprightly. (Psalm 84:11)

If the roof is so open to the sky, as the text implies, and there are events going on into the night, where are the lights? In the first Temple, the Glory was a light in cloud that filled the Most Holy, in the temple of Ezekiel's prophecy the Glory literally could shed light over the entire site, as in the wilderness wanderings when Israel lived in Tabernacles.

And there shall be no night there; and they need no candle, neither light of the sun; for the Lord God gives them light: and they shall reign for ever and ever. (Revelation 22:5)