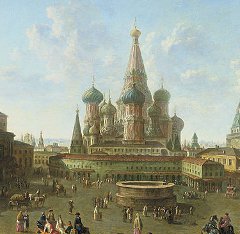 There is some controversy, as to Russia and the identification with Rosh in Ezekiel 38. We are told controversy is to exist with the truth. Be wary when it is gone. Paul wrote, “For there must be also heresies (from the Greek for “choices”) among you, that they which are approved may be made manifest among you”. (1Cor 11:18-19). We must always turn to the scriptures.

However there is some evidence from other sources, which can confirm scripture.

Firstly I will speak of Rus (Rosh) in Hebrew. Here are the Hebrew letters and word order in English with the Hebrew words Ezekiel 38

In the other place in Ezekiel 27 where the root word 'rosh' occurs – It is not quite the same, or the same word order!

The prefix before 'rosh' means “in” “at” “with” “by” “on”. My Hebrew teachers speak of how the first occurrence of the word historically gives the first and most important meaning.

The first occurrence of ראשׁ is significantly Genesis 3:15

And I will put enmity between thee and the woman, and between thy seed and her seed; it shall bruise thy (the serpent's) head (Rosh ראשׁ), and thou shall bruise his heel. (Gen 3:15).

So 'rosh' firstly speaks of the head of the serpent. Pause for a bit and put that same thought into Ezekiel 38 where it occurs 3 times.

This is what the Brown, Driver, Briggs (BDB) Lexicon says. It is based mostly on Gesenius (who is still used), but is updated with new findings.

The experts are of the opinion in Ezekiel 38 its a noun and a proper name. These experts translate it into English is as “Rosh” with a capital letter. In other words they follow Gesenius. They also follow the Septuagint.

My Hebrew teachers value the Septuagint and use it often, as Greek has so many texts still available so we can test the meaning of Hebrew words, as understood at that time. It may be a translation of varying merit, and no doubt full of all sorts of bias, but it is the bias which is interesting. In the years before the time of our Lord, the Hebrew scholars who were proficient in Greek translated a word mostly used for 'head' as 'Ros' Ρως;

Another point also. Magog in Hebrew could also mean “of Gog”, But in the Septuagint they translated it Magog...with a capital letter.

Below is the BDB Lexicon on “Gog”, which was the name also in 1 Chron 5;4 (another son in the same family was called “Baal'). Gog is listed under Meged. So we might think of “ha- meged -on” which is translated from Hebrew as “the place of Meged” see har-megid-on

OK that's enough stuff from Lexicons. But it's not that hard to see?

The last point is that in the Hebrew “Nasi rosh” as “Prince chief” is a bit odd and does not occur anywhere else. Nasi means “exalted one, chief” and rosh means “head, chief.” In Hebrew the meanings are so close as to be tautology. But more than that, it's not a word order that fits other patterns of the words in Hebrew.

When Daniel writes of a “chief prince” it is “ha'sarim ha'rishon” or literally translated “the Prince, the first.” Why does Ezekiel not have “ha'nasi ha'rosh”? Why use rosh in Ezekiel instead of rishon? When speaking of “chief fathers” the Hebrew in Numbers 36:1 is “roshi abot” (rosh changes to match the plural of 'ab'/ 'fathers') In Joshua 22:14 the “chief house” is “rosh bet (House)” not “bet rosh.” In places where rosh is used to describe something such as “chief men” “chief of the captains” the word “rosh” comes first as it does in English. In which case why not “rosh Nasi” “chief Prince” in Ezekiel? In 2 Kings 25:18 and Jeremiah 52:24 the chief priest is “Cohen ha'rosh” or “Priest, the head”, if this is a right pattern why not Nasi ha'rosh? Also Hebrew has a word for chief ruler 'Nagid' and also one for 'head person' or 'chief captain' 'Sar.' Why not use either of these words?

From ancient times, before our Lord's era, the Hebrews who knew Greek (with some authority), translated, based on its context, the word which is some contexts is 'head' in Ezekiel as a noun, or a proper name, “Ros”. Even today the most highly thought of Lexicon writers, also, for those 3 occurrences in Ezekiel, put it as a proper noun. It's the context. Magog is also a noun, related to 'magnificence.'

So did the Greeks of the time of translating the Septuagint know the Ros? It makes sense that they did. So what about the Vikings? Were they the Ros?

From here to where?