1) Notes on The Olivet Prophecy 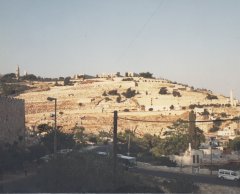 We have been given 3 accounts they are recorded in Matthew 24, Mark 13 and Luke 21. They are 3 eyewitness accounts and when put together can give a more complete picture of what was said.

The Bible never wastes one word. These 3 accounts are not repeats. They are 3 eyewitness accounts and put together can give a more complete picture of what was said, but this witness is a secondary purpose. The first purpose is to leave a record for all time of a message Yahweh wants the followers of Yahshua to have and understand. This prophecy covers the future of the servant of Yahshua from the day he spoke until he returns visibly to the earth.

The prophecy has a break. An analysis will show clearly the break in each record. It will also show that each record has a different focus. The table is to show what is different.

When all three are together it can been seen that Yahshua's discourse was quite detailed and it covered some points and then referred back to itself. For example Luke records that Yahshua said “that all things which are written may be fulfilled”, and this, refers back to the statement regarding Daniel's prophecy, which Matthew and Mark mention that Yahshua had explained previously.

Luke tells us that Yahshua spoke of “great signs from heaven”, this seems to be a summary of what Matthew and Mark say Yahshua said,

Yahshua here in the context is clearly speaking of the Jewish world of AD 70. At that time the Jewish “Sun” the political structure was eliminated, and the religious order was removed including the temple, so there was no Jewish “light” at all. In addition all the minor rulers, the Sadducees and Pharisees were disposed and dispersed, relating the the removal of the “stars”. Their fear that the Romans would take away their “place and nation” (John 11:48) was realised.

Then only Luke goes on to record what Yahshua says of the detail of the capture of Jerusalem. Luke then records a critical prophecy, that neither Matthew or Mark do, that Jerusalem would be ruled by Gentiles until a specific time in the future. Neither Matthew or Mark mention it, but then Yahshua goes on to speak again of the sun moon and stars, but note what he says is very different. This time the sun, moon and stars are not “darkened” but rather show “signs”. This matches Matthew 20:30 which speaks of the “sign” of the son of man.

If there is a sign in the same “sun” that was “darkened” or politically extinguished in AD 70, then it follows that same “sun” must be in existence and “shining” again. The “sun” darkened in AD 70 was the Jewish nation. Therefore as Israel exists, the Jewish “sun” is “shining” again. This matches Luke's account that Jerusalem would cease to be in Gentile hands before Messiah returns. The “sign of the son of man” is therefore the re-establishment of Israel as a nation. This “sign” was such a great sign that many called it a “miracle”. Israel was a remarkable miracle as no other nation has been voted into existence in the United Nations, which is the place of National rule, which in the language of the Bible is “heaven”. Truly this “sign” or miracle occurred in “heaven” or the place of rule by the National powers. History now shows us that there was some time until Jerusalem was again in Jewish hands after the “sign of the son of man” was in place. Luke tells us that Yahshua said that after this point when Jerusalem was in Jewish hands there would be distress of nations. It is 1967 that began the era of protests. It was this year that paved the way for the controversy over Jerusalem that even now is bringing all nations to war.

The last interesting point is the difference in the parable of the fig tree. Matthew and Mark are almost word for word. Luke uses different terms entirely. Matthew and Mark speak of the branch being “tender”and the putting forth of the leaves, but Luke speaks of the “shooting forth” or of a rapid growth. These are distinctly different terms. Matthew and Mark say that Yahshua said “Now learn” but Luke says Yashua said “behold the fig tree”. Luke is always precise. The simple explanation is it is possible the full parable had two iterations. Luke adds “and all the trees” and that Yahshua said “when ye see these things come to pass, know ye that the kingdom of God is nigh at hand.” Neither Matthew or Mark mention other trees or use the term “kingdom of God”.

Therefore there is something special about Luke's account. It is possible Luke's account is a special inspiration written for us in this generation, or it could be there was two iterations of the parable. Most teachers do repeat themselves, however, Yahshua never wastes one word. It could also be that Matthew and Mark heard both iterations but focus on the point that their generation would not pass that would see the darkening of the Jewish sun. Their record has been left for us as it is useful. We can now look back with confidence and understand.

Luke by contrast focuses on another, second, generation in the future who would see the end of the rule of Jerusalem by Gentiles and see at the same time the “shooting forth” or rapid growth of “all the trees”. That generation also would not pass before the fulfilment of Yahshua's words, this time they would see, not the destruction of Jerusalem, but rather the coming of the kingdom of God.

Untill the end of the times of the Gentiles