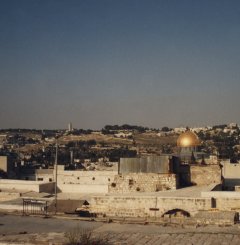 The daily news is the greatest evidence there is for the existence of a powerful Creator. Israel is the grit in the world oyster, evidence that the Gospel is the pearl without price (Matthew 13:46). At the pearl's centre is Jerusalem.

If Israel is grit, Jerusalem is to be a heavy stone. Once Jerusalem was relatively unimportant. For example, at the time of the writing of the Koran it was so unimportant that it was not once mentioned in the Koran, by any name. But the God of the Bible said at a specific time,

In that day I will make Jerusalem a burdensome stone for all peoples. All who lift it shall be cut in pieces, and all the nations of the earth will be gathered against it. (Zechariah 12:3)

History has shown the world 'that day' that God appointed was June 7, 1967. The effects of 'that day' are still felt worldwide as the nations pressure Israel about the 1967 border. America has already been cut for taking hold of the issue of Jerusalem. It is powerful evidence that,

Surely the Lord GOD will do nothing, but he reveals his secret unto his servants the prophets. (Amos 3:7)

The Apostle Paul stated some would see the power of God at work and have great faith, whereas others would not believe,

But they have not all obeyed the gospel. For Isaiah says, “Lord, who has believed our report?” So then faith comes by hearing, and hearing by the word of God. (Romans 10:13-17)

Cyrus the Great encouraged the Jews to rebuild their Temple and return to their homeland.

What the world leaders intend and what God directs may be different things. In this case of the US Administration's action in the UN Security Council the Bible, with an amazing track record, both predicted the situation and indicates the future, which won't be as they hoped. They are on the wrong side of the Maker of history.