1. The first instance in the New Testament of the word 'satan' is where the Lord Y'shua (Jesus) is tempted in the wilderness and offered 'all the kingdoms of the world'. When this incident is placed in the historical context it shows no very high mountain was required to see all the kingdoms. To give some background. The Greek word Basileias speaks of a royal kingdom, which Rome was not at that time (approx 27 CE). But the Tetrarchs as sons of King Herod 'king of the Jews', ruled as kings in Herod's power.

But when he heard that Archelaus did reign (basileuō) in Judaea in the room of his father Herod, he was afraid to go there: (Matthew 2:22)

By contrast the rule of the Caesars (at time the Republic had become a dictatorship) is not basileuo, or royal, but hegemonia.

Now in the fifteenth year of the reign (hēgemonia) of Tiberius Caesar, Pontius Pilate being governor of Judaea, and Herod being tetrarch of Galilee, and his brother Philip tetrarch of Ituraea and of the region of Trachonitis, and Lysanias the tetrarch of Abilene, (Luke 3:1) 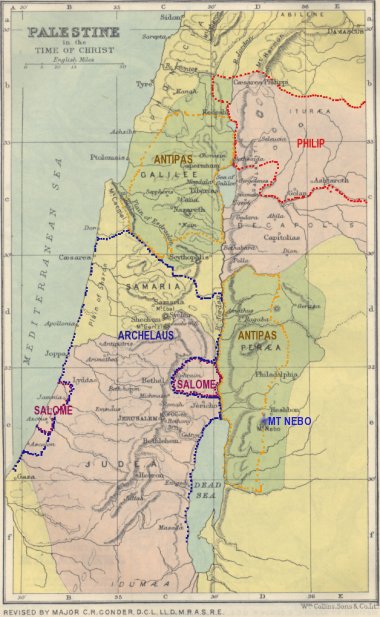 Therefore the kingdoms of that Jewish order or 'kosmos' ca. 27CE (the physical world in Greek is oikoumenē) could all be seen from one mountain at that time.

Again, the traducer (diabolos) takes him [Y'shua] up into an exceeding high mountain, and shows him all the kingdoms (basileias) of the world (kosmos), and the glory of them; And said unto him, “All these things will I give you, if you will fall down and worship me.”

Then said Y'shua unto him, “Get thee hence, Satan: for it is written, Thou shall worship the Lord thy God, and him only shall thou serve.”

Then the traducer (diabolos) leaves him, and, behold, angels came and ministered unto him. (Matthew 4:8-11)

The parallel record in Luke is,

And the traducer (diabolos), taking him up into an high mountain, showed unto him all the kingdoms (basileias) of the world (oikoumenē) in a point of time. And the traducer said unto him, “All this power will I give you, and the glory of them: for that is delivered (betrayed, surrendered) unto me; and to whomsoever I will I give it. If you therefore will worship me, all shall be thine.”

And Y'shua answered and said unto him, “Get thee behind me, Satan: for it is written, Thou shall worship the Lord thy God, and him only shall thou serve.” (Luke 4:5-8)

The Meaning of satan in the context: There is nothing supernatural in the exchange, especially when the Jewish thinking of that time regarding the Jewish world and its limited scope to the Promised Land is considered. The Macabees would never have sought to conquer more than David's or Solomon's kingdom. In 66CE all those kingdoms were taken from the Romans, and it was not the only attempt. The traducer was offering the Jewish kingdoms which could only be obtained by being a traitor, and one already with power conferred by Rome. The person was an obstacle to Y'shua's thinking, by offering an attractive alternative to the path he knew he had to take. Many Christians miss it, but the implication is that he knew from early in his ministry the end was death. He says after John the Baptist was beheaded- that his fate was to be the same.

The event is summarised in Mark as

And he was there in the wilderness forty days, tempted of Satan; and was with the wild beasts; and the angels ministered unto him. (Mark 1:13)

It must be asked why John's parallel record does not mention it, when John was a witness of that part of the ministry. Also John knew, and was known by, the High Priest Caiaphas (John 18:13). Caiaphas, who at that time had significant power and might seek people to worship him, was certainly young enough and fit enough to have gone out to find out about the man John baptised. John begins his witness account,

And this is the record of John, when the Jews sent priests and Levites from Jerusalem to ask him [John the Baptist], Who are you? (John 1:19)

led him [Y'shua] away to Annas first; for he was father in law to Caiaphas, which was the high priest that same year. Now Caiaphas was he, which gave counsel to the Jews, that it was expedient that one man should die for the people. (John 18:13-14)

One can see, if it was Caiaphas, or one of the Chief Priests, why John was silent and why the general term diabolos was used. There was always respect for the rulers, especially the High Priest.

Then said Paul, I knew not, brethren, that he was the high priest: for it is written, Thou shall not speak evil of the ruler of thy people. (Acts 23:5)

If it was the High Priest, or one of that priestly power bloc of that time led by Annas, it explains why the incident shows Y'shua had respect, for he follows the person and listens and answers courteously. It is clear that Y'shua was tempted, as he later responds the same way to Peter, and he could not be tempted if no tangible thing was being offered. Power of that sort was tempting, and in the political climate of that time it was possible they could have taken power. An energetic and powerful High Priest and the powerbroker Annas with a young man, endorsed by the popular John the Baptist, in whom was embodied two hereditary lines of king David and whose birth was marked by wonder and disaster were certain to obtain popular support for an independent Jewish kingdom. Or it may have been one of the Herods. But Y'shua rejected the temptation, and at the end offended the tempter. And it is likely whoever it was, John knew. And he was, remarkably, silent.