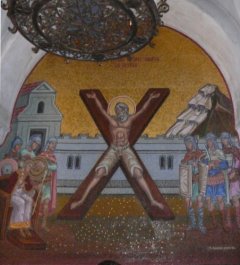 Revelation 13 and Revelation 17 both advise the reader to seek wisdom. The harlot 'woman' and 'the beast' have a connection to the city that sits on seven mountains, which historically has been identified with Rome, the great and powerful city. The beast here is identified by a number, six hundred and sixty six (666).

And that no man might buy or sell, save he that had the mark, or the name of the beast, or the number of his name. Here is wisdom. Let him that has understanding count the number of the beast: for it is the number of a man; and his number is Six hundred threescore and six. (Revelation 13:17-18)

Revelation 17 deals with a relationship that exists between the beast and the woman.

And the angel said unto me, Wherefore did you marvel? I will tell you the mystery of the woman, and of the beast that carries her, which has the seven heads and ten horns. ..And here is the mind which has wisdom. The seven heads are seven mountains, on which the woman sits. (Revelation 17: 7,9)

The reader is told, “Let him that has understanding count the number of the beast:” (Revelation 13:18) The emphasis here is on 'count ' the number, which indicates to 'add'.

Irenæus, who oversaw the congregation at Lyons approximately 70 years after the time John recorded the Revelation, wrote in his work that the number was indeed 666 and that it was a name in a Greek form. Irenæus was of the opinion that Λατεινος Lateinos was the name. Iranaeus wrote, “it is very likely, because the last kingdom is so called, for they are Latins who now reign, but in this we will not glory.” It is to be noted that over history sometimes the Greek speakers and culture ruled and sometimes the Latin speakers and culture ruled, right until today. It is clear that Irenæus did not think it was the name of a person, but rather the title applied to a kingdom. Irenæus had studied at the feet of Polycarp, who while a member of the congregation at Smyrna, had met with the apostle John. Hippolytus(c.170-c.235-6) a fellow member and successor to Irenæus wrote in some length on the very verses we are considering saying,

“the first beast was healed, and he shall cause the the Image to speak, that is to be powerful: and it is manifest to all, that the rulers are now Latins Λατεινοι; transmuted therefore into the name of one man it becomes Lateinos Λατεινος.”

This comment underlines how the name for a regime becomes the name for 'one man', which is a relevant for even in modern history we see how a whole regime is characterised by its leadership. We have early and authoritative comment, contemporary to the emergence of the Latin kingdom, which no subsequent history has discounted.

The numerical value of the letters in Greek and that make up the name of the beast total that amount 666 in this way:

They knew, as we do, that 'the beast' was from one of the 4 horns of the Greek 'goat'. The question of the time was even though the beast was Greek, was the horn that would come out came out of it a Greek or a Latin? This says we can know which by the number of the name (in Greek). Its is somewhat more simple than may be thought. Even now the question of the leadership of the XP (chi-rho) is Latin versus Greek. This verse tells us it is the Latin, and it was preserved for us from one who knew.

As to Latins or Greeks, this is the history from the Catholic Encyclopaedia,

“The Latin Church is simply that vast portion of the Catholic body which obeys the Latin patriarch, which submits to the pope, not only in papal, but also in patriarchal matters. It is thus distinguished from the Eastern Churches (whether Catholic or Schismatic), which represent the other four patriarchates (Constantinople, Alexandria, Antioch, Jerusalem), ... there are still the five patriarchates, of which the Latin Church is only one, .. All Latins are Catholics, but not all Catholics are Latins. The old frontier passed just east of Macedonia, Greece (Illyricum was afterwards claimed by Constantinople), and Crete, and cut Africa west of Egypt. All to the west of this was the Latin Church.

... England is most certainly part of the Latin patriarchate. When Anglicans return to the old Faith they find themselves subject to the pope, not only as head of the Church but also as patriarch. As part of the Latin Church England must submit to Latin canon law and the Roman Rite just as much as France or Germany... It follows also that the expression Latin (or even Roman) Catholic is quite justifiable, inasmuch as we express by it that we are not only Catholics but also members of the Latin or Roman patriarchate.”

It is interesting that it is recorded that in the period of Pope Vitalian (657-672) “the Latin language made a liturgical resurgence—officially replacing Greek—between 660 and 682” (http://en.wikipedia.org/wiki/Byzantine)

About four hundred years after Charlemagne, Latin had become firmly established as the language of the Papal kingdom and empire.

In 2008 the senior Vatican Cardinal announced that the Old Latin Mass known as the Tridentine Rite, would be celebrated in all parishes and the first Latin mass in forty years was held at Westminster Catholic Cathedral. Benedict XVI released a papal encyclical on Mass in Latin on 7th July 2007 to reintroduce Latin as the official language into the Catholic Church. Hugh McNichol proclaimed on May 15th 2008,

The development of a Latin section on the Vatican’s website is indicative of how truly unifying the Latin language is for the Catholic Church.

Much is made of the prevention of trade by receiving of a mark. People seem to be expecting some mercantile business restriction. But see the context:

See how it is all about worship!

And that no man might go to market to redeem (other souls) or be busy and trade and sell (their way of worship),

But note also that elsewhere in Revelation 'six hundred' is hexakosioi – why the difference? Is there something we can learn in the symbols ? There is a correlation....

(1) The mark is chi χ 600 this was used by Constantine I it is now a sign used as part of certain churches liturgy. such a mark is made by many people in the past and even in the modern world over themselves.

(2) The name of the beast is xi ξ 60 xi is the semitic 't' ת sound but instead the Greeks used 3 parallel lines Ξ it is a number using a letter that fell out of use. An old revived letter. In the pagan Plato's definition the soul had 3 parts.

But 'the beast' is wholly represented by the number of man. Humans were created on the 6th day.

However we need to count up the number of the beast, which would total 666.

In terms of buying and selling note the same word is used of the servants,

You are bought with a price; be not you the servants of men. (1Corinthains 7:23)

Revelation 13 explains that the true servants of God cannot buy or redeem other souls and they cannot be busy and trade in souls or sell them. It is not about a mercantile exchange, but about whether people can preach to people, and worship, freely.

For many years the Latins ruled over 'the beast' which was the kingdom of Europe that had emerged out of the Roman empire and prevented any person but themselves trading in souls.

For 1260 years they maintained their sole trading position in regards to souls (causing people to pay for their souls), on pain of death for any who would convert others to another form of worship. See here.

For the background on Antichrist see here