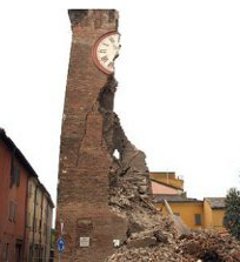 There are quakes occurring in diverse places. Recently there were two similar magnitude quakes in Italy and Israel within a week. Rome and Zion. They may speak of events occurring there.

The quake in Italy in the dark of the early hours of Sunday 20th May, 2012

The quake severely damaged the Town Hall building on Sant' Agostino near Ferrara.. The epicenter was located between Modena and Mantova. INN

Sant Agostino means the set apart 'venerable' one. Modena a means 'red' like crimson and Mantova is Mantua, which in English is a mantle, but in Italian the name is from Mantus a god of the dead whose consort was Mania goddess of insanity and madness. In this there is a description of Rome wearing its red, but a cloak hiding that it is presiding over the dead (reported praying for the dead child Melissa Bassi ( here)

We might be expecting to see a political change in the culture, and perhaps the most significant thing was a journalist witnessing the collapse of a clocktower,

Quake struck in the middle of the night .. The tremor caused "significant damage to the cultural heritage" of Emilia Romagna region, the government said.

In one square, an old clocktower stood half-destroyed by the quake. A small crowd had gathered and was looking on at the ruin. Just as we joined them, another aftershock struck. In front of us, what remained of the tower collapsed, tumbling down in a shower of bricks and timbers and sending a great cloud of dust rolling across the square. BBC 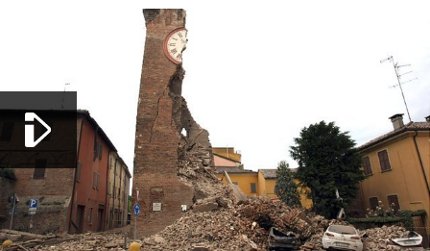 What change might it herald? There are talks already that NATO is gone, or changing. Symbolically Italy was shown as having to leave the NATO talks.

Prime Minister Mario Monti was to return early from the United States, where he was attending a NATO summit, as Italy reeled from the double shock of the quake and a deadly school attack that took place on Saturday. Yahoo

Israel National News linked the Sunday quake in Italy to the earlier Sabbath quake in Israel,

A little over a week ago, a 5.3-magnitude earthquake rocked northern and central Israel. INN

This is highly remarkable coming as it did soon after the world was shocked by the much spoken of Israeli election being cancelled Tuesday May 8th.

In a dramatic move, the Likud and Kadima parties agreed on a unity government early Tuesday, averting the prospect of early elections. Prime Minister Benjamin Netanyahu and Kadima Chairman Shaul Mofaz finalized the surprising unity agreement hours before the Knesset was expected to approve its own dissolution and set September 4th as the date of the next elections. Ynet

Speaking at a joint press conference with Kadima chairman Shaul Mofaz, Netanyahu said: "I was ready to go to elections. But when I learned that a very broad government can be established, the broadest in Israel's history I realized that stability can be restored. Ynet

An earthquake rocked Israel on Friday evening, shortly before 10:00 p.m. local time, and was felt in areas from northern Israel to central Israel. INN

The earthquake was felt as far south as Rishon Lezion, and as far north as Safed.

Residents in Lebanon also reported the earthquake, with Lebanese media saying tremors were felt in Beirut, Sidon, Tyre and the coastal city of Tripoli.

Police said they received thousands of phone calls in localities nationwide shortly after 9:50 p.m. Residents in Safed, Beit She’an and neighboring towns in the Jordan Valley, Migdal Ha’emek, Araaba, Haifa and other cities and towns called their local authorities to report the tectonic event.

The tremor was most widely felt in the north, where residents reported leaving their homes as a precautionary measure. The last earthquake to hit Israel took place in April 2011, and had a magnitude of 5.9. Ynet

That previous 1 April 2011 earthquake on Friday afternoon was in an unusual location. A simultaneous quake off Greece was felt in Cairo. jpost

It came at a time of other small quakes in Crete and Chile, while Japan was still reeling from its large quake. The time was an era of ongoing protest, and there were moves to push for a Palestinian state at the UN.

Another very rare quake from a centre with no history of quake off the coast of Tel Avi and Haifa was felt Sunday 7th August 2011. Tremors were felt as far south as Gaza. INN

On the 8th an emergency session of the Knesset was called to deal with the social protests. On that day the Trajtenberg Committee was set up to deal specifically with the cost of housing. One factor that affects the cost of housing is the stop to building in the natural growth area of Judea and Samaria. Soon after this 1600 units were approved in 'disputed' Jerusalem. 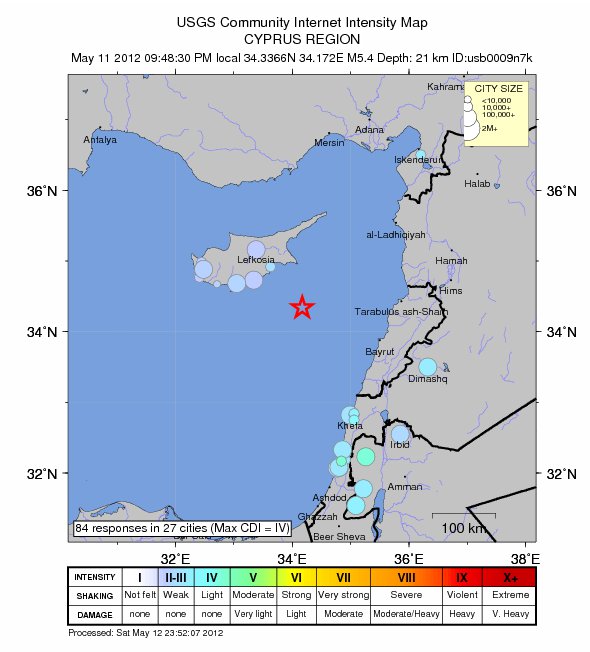 The quake of 2012 though small has some curios associated with its epicentre,

Residents in Lebanon also reported the  earthquake, with Lebanese media saying tremors were felt in Beirut, Sidon, Tyre  and the coastal city of Tripoli. update news

Its epicentre was in the sea between Cyprus and Lebanon and was felt in those nations and as far as Damascus. It was felt most strongly, oddly, in Nablus (Shechem) friendlyforecast.com

Israel is connected with Cyprus now. Israel formed agreement with Cyprus regarding that sea in December 2010. haaretz

On May 17th it was reported,

According to Turkish media reports Thursday, the Israeli aircraft flew over the Turkish Republic of Northern Cyprus between 11:05 a.m. and 12:49 p.m. local time on Monday, and Turkish fighter jets had to chase out the Israeli jet, the Turkish army said in a statement. TimesofIsrael

While the world is not watching, Turkey is starting to challenge Greece for oil drilling in Cyprus waters. Cyprus is disputed between Greece and Turkey with the northern section of Cyprus a breakaway allied to Turkey. Israel has begun negotiations with Greek Cyprus for oil drilling and co-operation on gas exports. In January 2012 it was reported,

On September 7th, 2011, Eliades met with Israeli Ambassador Michael Harari and discussed strengthening bilateral military cooperation. On the same day, Turkey announced its decision to suspend military and commercial agreements with Israel. ...In response, Turkey boosted its naval presence in the Eastern Mediterranean, claiming that Cyprus' agreement on maritime borders with Israel is null-and-void, and asserting the right to 'freedom of navigation.' cyprusnewsreport

Israel's connection with Cyprus is allowing Turkey to justify escalating tensions between Turkey and Israel. It fits also a bigger picture, that of Turkey's aspiration in Europe..

It was directly after the May 13 victory of Holland in France, that Turkey began to renew its EU bid. Sarkozy had not loved Turkey, and Turkey is now feeling strengthened and optimistic as,

The elections in France ousted from power one of the leading opponents of Turkish accession to the European Union- Nicolas Sarkozy....

Hollande was the beneficiary of Moslem votes during the election and appointed three Muslim ministers, including the government spokeswoman. The Socialist victory was celebrated at the Bastille square and at that celebration Moroccan and Algerian flags nearly outnumbered the French tricolor.

A third factor that is encouraging to the Turks is the deteriorating status of the traditional enemy - Greece - within the European Union. Particularly over the Cyprus issue, Greece and Cyprus have been blocking progress of negotiations between Turkey and the EU. INN

So a quake centred in that region of Cyrpus, might not just indicate effects in Israel, but perhaps regional political effects. There is some thought that a unity government in Israel is in preparation for war.

The Six-Day War is legend, but less remembered is that, four days earlier, the nationalist opposition (Menachem Begin’s Likud precursor) was for the first time ever brought into the government, creating an emergency national-unity coalition. Forty-five years later, in the middle of the night of May 7-8, 2012, Prime Minister Benjamin Netanyahu shocked his country by bringing the main opposition party, Kadima, into a national unity government. Shocking because just hours earlier, the Knesset was expediting a bill to call early elections in September. Washington Post, May 11, 2012 also Chicago Tribune Chicagotribune

The earthquake in Israel signalled a political change. The unity government might yet have regional implications, some which might affect most Northern Israel, Damascus and Cyprus. Will it be related to a cultural-political quake affecting the 'venerable' of Italy? Any success of Israel is a blow to the 'venerable' guardian of the dead in Rome. At the very least the quakes underline the sense of the rapid political changes in the region. It is as if the natural order is reflecting the political pains and rapid changes.

For we know that the whole creation groans and travails in pain together until now. (Romans 8:22)

We have a free book offer for now, you may be interested in here

Or read futher about the Black hole stealing star