In Israel Yom Yerushalayim, Jerusalem Day, celebrates when a divided city became one in 1967 on the 28th of Iyar. The Hebrew date varies in the Georgian calendar. In 2009 it's Friday 22 May. The issue of Jerusalem at 42 is one requiring the wisdom of Solomon.

When people think of Jerusalem they think of the old city, but most people since 1918 live outside the wall in the new city which surrounds the old. In 1948 greater Jewish Jerusalem was divided when Jordan seized control of the old city (East Jerusalem).

In the war of 1948 the 100,000 strong Jewish population was evacuated from the Jewish quarter for their safety, leaving Jordan in control of an Arab and Christian population. In the 19 years they ruled, nothing was done for the city, except the enforcement of laws to prevent Jewish access and to limit Christian freedom and access.

From 1948-1967 was the only era in recent history that part of the city could have been successfully divided to be made an Arab city. Though there was the issue of the Israeli institutions on Mt Scopus including the Hebrew University, established in 1918, and the Hadassah Hospital, established 1939, being included in the Arab area. After 1948, Mt Scopus was a UN protected Israeli enclave within Jordanian-occupied territory. But Jordan, by declaring war on Israel in 1967, lost the opportunity for an Arab city.

Jerusalem, for the Jews, was reunified with the establishment of Israeli control over the Old City (including the Western Wall) during the Six Day War in June 1967. They could then gain secure access to Mount Scopus. In 1967 the displaced Jews poured back into the old city and rebuilt the Jewish quarter. From that time the Municipal policy was to prevent the city ever being able to be physically divided along religious lines again,

Moshe Safdie, the world-renowned Israeli-Canadian architect, who has done considerable work and planning in Jerusalem.. acknowledged that the implementation of Israel's policy [of ensuring, since 1967, that the city would never be physically redivided] has made it all but impossible to configure any kind of separating line that would allow Jerusalem to evolve into two jurisdictions, Israeli and Palestinian, without each of there[sic] areas being in fact a mix of both populations. Safdie also explained, with approximately 100,000 Israelis now living across the Green Line and "intermingled into Palestinian neighbourhoods and villages, there is no practically[sic] way of returning to the pre-1967 situation http://www.mefacts.com/outgoing.asp?x_id=11340

When Jerusalem was united as an Israeli city in 1967 they incorporated some Arabs, and now Arabs are 1/3 of the population of the city, most refusing to take Israeli citizenship. So despite the city being united and unable to be divided physically, the people are still divided. After 42 years of integration, now that division is impossible, many of the 1/3 Arab portion of the population want to go back to 1967 lines and take their portion of the city.

The decision of Solomon

The international community of national leaders are in the habit of thinking they have 'say so' over Jerusalem, probably because they want it as an international city (which neither Jew nor Arab would want). The national leaders see the violence of discontent of the Arabs who are calling for the division of Jerusalem. They are, this year, after 42 years, placing pressure on Israel to divide the city.

Solomon whose name means 'peaceful' made just such a decision and brought peace. When he was asked by God what he wanted he did not ask for riches or fame but asked for wisdom. The great example of this wisdom in judgement is the 2 women who came to him with one baby child that they both claimed to be theirs. The issue is summarised,

And the other woman said, “No; but the living is my son, and the dead is your son”.

And this said, “No; but the dead is your son, and the living is my son”.

This was two people in sharp dispute for a possession. Solomon the peaceful, was decisive

And the king said, “Bring me a sword”. And they brought a sword before the king.

Then spoke the woman whose the living child was unto the king, for her heart yearned upon her son, and she said, “O my lord, give her the living child, and don't slay it”.

Note the two responses, one supported the idea of dividing the child the other thought it was better to give their right to the child away.

The Parallel with Jerusalem

Solomon means 'peaceful' and Jerusalem means 'built in peace'. In parallel of the situation in the days of Solomon, the international leaders are calling for the sword to divide Jerusalem. It seems quite clear it is the way to solve a situation where 2 parties want the same object. Divide it in half.

But Jerusalem is a living entity. It is like the child. If it would be divided now it would die as a city, so small would be the bits it would be cut into. There is now a generation whose only home is in areas within other enclaves. There is also the crazy juxtaposition of religious sites in such a tight area and the certainty that secure access for some from place to place would be impossible if it was divided. Even without the Mt Scopus enclave, rational division is no longer possible without disrupting all the things that make a city a living entity, from road access to services such as water and electricity to municipal and public buildings. 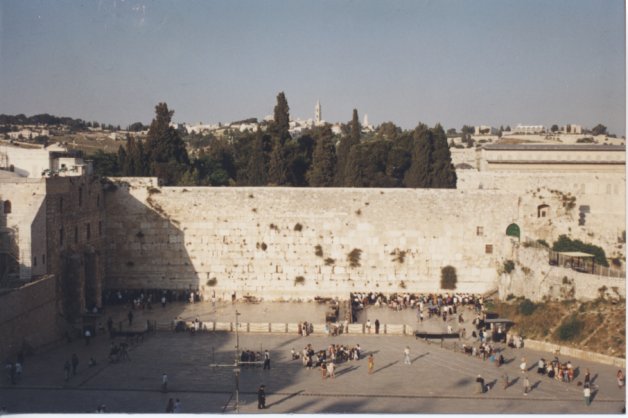 Those who divide Jerusalem, the new city from the old city, and east from west, will kill it.

As the call goes to divide we can listen to the responses of the two sides. The Jews vary from those who would keep it as one, to those who would divide it to those who for peace would give it away. But the Palestinians seem only to call that it be divided and their half be given to them.

Solomon, though he had the sword in his hand, did not kill the baby. He gave it to the woman who gave away her right to a half to save its life,

Then the king answered and said, Give her the living child, and don't slay it: she is the mother of it. And all Israel heard of the judgement which the king had judged; and they feared the king: for they saw that the wisdom of God was in him, to do judgement. (1Kings 3:27-28)

It is likely the actions of the leaders of the nations in the next year will prove that none has the wisdom of Solomon. Those who take it in their hands to divide Jerusalem will be cut with the sword they use.

And in that day will I make Jerusalem a burdensome stone for all people: all that burden themselves with it shall be cut in pieces, though all the people of the earth be gathered together against it. (Zechariah 12:3)

Zechariah says 'all' world leaders will be cut by the issue. Their lack of wisdom will lead to such a mess that all people will be grateful for the leader, 'the greater than Solomon' (Luke 11:31) who will come to Jerusalem and unite the city. Then Jerusalem will finally live up to its name, as it did in the days of Solomon, and be 'built in peace'.

For more on Jerusalem in the Bible

Jerusalem as the centre of one world religion