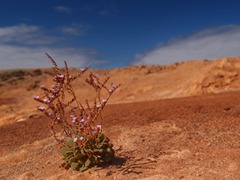 The talk began with reference to a favourite childhood book about an orphan who overcomes trial, and unattractive features due to a positive character. She was initially teased and unloved but over the years came to be the brightest girl at school, loved and respected. The main point is, it doesn't matter where you have come from, it matters what is in your heart. She overcame prejudice because she was so attractive on the inside.

The Bible speaks about two important people who overcome prejudice and people despising them.

The first one was Joseph (Genesis 17). He was one of 12 children born to 4 different mothers. His mother died when his younger brother Benjamin was born. His brothers hated him and when he was 17 years old they sold him into slavery to the Midianites. The Midianites sold him to Potipher, the captain of Pharaoh's officers in Egypt. About 10 years later Joseph was put into prison for something he did not do, where he stayed until he interpreted Pharaoh's dream who then promoted him to be a ruler over all Egypt. He was 30 years old.

The second example from the Bible is Jesus Christ. The Bible tells us that he was despised and rejected. He had no beauty and was familiar with suffering and sorrow (Is 53). People thought that he was illegitimate. One of his 12 disciples Judah betrayed him to death. At his trial for crucifixion his friends deserted and denied him. But God raised him from the dead and he now sits at God's right hand as a King - the King of the earth.

The life picture we see of Joseph and Christ is not unique in the Bible. It appears in almost every Bible life. Abraham and Sarah, Isaac and Rebekah, Jacob, Joseph, Moses, Hannah and Samuel, Ruth and Naomi, David, the prophets, Christ, the 12 disciples, Paul, the 7 churches in Revelation. Heb 11:33-40 gives us a description of their lives; some were tortured, jeered at, flogged, chained and put in prison, stoned, sawed in two, destitute, persecuted and mistreated. They did this to obtain a better resurrection and were commended for their faith and they now wait in sleep so that they can be made perfect with us.

Those in the Kingdom of God will not be there because they are rich, famous or important. It is those who have suffered and been persecuted for God. In Rev 21;1-4 we see a picture of God's Kingdom. We see Jerusalem coming down from heaven, and God then dwelling with people and wiping away tears from their eyes. There is no more sorrow or death. The old way that we know now will pass away. Rev 5:10 says that we will reign as kings and priests on earth. The eyes of the blind will be opened, the ears of the deaf will hear, the lame will leap, water will be in the desert (Is 35:5-10). The redeemed of God will enter Zion with gladness and joy. Sorrow and sighing will flee away.

And the ransomed of the LORD shall return, and come to Zion with songs and everlasting joy upon their heads: they shall obtain joy and gladness, and sorrow and sighing shall flee away. (Isaiah 35:10)

So why is there suffering in our lives? The Bible gives us many answers:

2. To develop our character. In life you never see anyone do great things unless they have experienced hard things and worked to overcome them.

3. To show the powerful hand of God by miracles. If everything was easy we would not need God or recognise that it was God doing it.

Some Bible verses to show points 2 and 3.

Isaiah 66:2 God esteems the person that is humble and contrite in spirit and trembles at His word.

James 2:5 God has chosen those that are poor in the eyes of the world to be rich in faith and to inherit the Kingdom.

1 Corinthians 1:28 God has chosen the lowly things of the world and despised things

Blessed are the poor in spirit: for theirs is the kingdom of heaven. (Mat. 5:3)

The Powerful hand of God

John 9:3 Jesus was asked why a man was born blind. Jesus replies that it was because the work of God was to be displayed.

Luke 1:37 Elizabeth, old and barren, became the mother of John the Baptist because with God nothing is impossible.

When people look down at you, when you suffer as a Christian, have confidence in God. I encourage you to choose a Bible character that you can relate to and make them your inspiration. They would not look down at you, but encourage you to continue in Christ, waiting for his second coming to earth. When he does come there will be no more tears of sorrow, instead there will be mercy, justice and righteousness.