How do we know a lying Prophet? Will we be able to make an excuse before Jesus at the Judgement by claiming we were deceived? Are we not asked to recognise false prophets? In any case we have been given an exemplar judgement of the God of Israel regarding our responsibility to recognise a false prophet, in the history of the man of God, the false prophet and the lion. The incident is recorded in 1 Kings 13.

The Man of God

Jeroboam had been given rule over the 10 tribes of Northern Israel approx. 975BC. However his people still went to Jerusalem in the rival Southern kingdom of Judah to worship. Jeroboam came up with the bright idea of making up his own religion, priestly order and making a place of worship at Bethel.

But the God of Israel was not happy and sent a 'man of God', a prophet, from Judah (the Southern kingdom) to Bethel condemn Jeroboam.

Behold, there came a man of God out of Judah by the word of Yahweh to Beth El: and Jeroboam was standing by the altar to burn incense. He cried against the altar by the word of Yahweh, and said, “Altar, altar, thus says Yahweh: ‘Behold, a son shall be born to the house of David, Josiah by name. On you he shall sacrifice the priests of the high places who burn incense on you, and they will burn men’s bones on you.’”(1Kings 13:1-2)

We are not told this prophet's name. However the prophecy was fulfilled in detail approx 350 years later in 622BC and it is recorded,

As Josiah turned himself, he spied the tombs that were there in the mountain; and he sent, and took the bones out of the tombs, and burned them on the altar, and defiled it, according to the word of Yahweh which the man of God proclaimed, who proclaimed these things. (2Kings 23:16)

Jeroboam the king was not happy of course,

It happened, when the king heard the saying of the man of God, which he cried against the altar in Bethel, that Jeroboam put out his hand from the altar, saying, “Seize him!” His hand, which he put out against him, dried up, so that he could not draw it back again to himself. (1Kings 13:4)

He asks for his hand to be healed

“Now entreat the favor of Yahweh your God, and pray for me, that my hand may be restored me again.”

The man of God entreated Yahweh, and the king’s hand was restored him again, and became as it was before.

It seems that Jeroboam recognises the word of Yahweh and hopes to gain the favour of the prophet the man of God and he invites him into his house, a high honour. But the man of God has been given instructions by Yahweh.

The man of God said to the king, “Even if you gave me half of your house, I would not go in with you, neither would I eat bread nor drink water in this place; for so was it commanded me by the word of Yahweh, saying, ‘You shall eat no bread, nor drink water, neither return by the way that you came.’”So he went another way, and didn’t return by the way that he came to Bethel.(1Kings 13:8-10)

It is at this point we meet the false prophet of Bethel in Samaria.

Now there lived an old prophet in Bethel; and one of his sons came and told him all the works that the man of God had done that day in Bethel. They also told their father the words which he had spoken to the king.(1Kings 13:11)

This prophet goes after the prophet from Judah, who is heading back home. But though this prophet of Judah is not to stop, he is found resting,

He (the prophet of Bethel) went after the man of God, and found him sitting under an oak. He said to him, “Are you the man of God who came from Judah?”

As the man is sitting, we may presume he was tired, and as he had eaten nothing, hungry. The prophet from Judah, however, is adamant.

Then the prophet from Bethel then perpetrates a lie,

He said to him, “I also am a prophet as you are; and an angel spoke to me by the word of Yahweh, saying, ‘Bring him back with you into your house, that he may eat bread and drink water.’” He lied to him.

In any case obeying the false prophet led to this response,

It happened, as they sat at the table, that the word of Yahweh came to the prophet who brought him back; and he cried to the man of God who came from Judah, saying,

“Thus says Yahweh, ‘Because you have been disobedient to the mouth of Yahweh, and have not kept the commandment which Yahweh your God commanded you, but came back, and have eaten bread and drunk water in the place of which he said to you, “Eat no bread, and drink no water;” your body shall not come to the tomb of your fathers.’”(1Kings 13:20-22)

This is unequivocal. A sudden condemnation.

We may think this is tough, and too hard. But let us think. The first instruction was short and very clear. The commandment the prophet had to follow from Judah was simple and unambiguous. To eat with another person in that culture was to show friendship and fellowship. The message Yahweh was delivering was one of total rejection of the evil of way of life of the Northern Kingdom. The man of God had to act this message out, by refusing to eat there. The only reason for not following the simple command when the opposite instruction was given by the false prophet was personal desire.

The event introduces the lion.

It happened, after he had eaten bread, and after he had drunk, that he saddled the donkey for the prophet whom he had brought back. When he had gone, a lion met him by the way, and killed him. His body was cast in the way, and the donkey stood by it. The lion also stood by the body. Behold, men passed by, and saw the body cast in the way, and the lion standing by the body; and they came and told it in the city where the old prophet lived. When the prophet who brought him back from the way heard of it, he said, “It is the man of God who was disobedient to the mouth of Yahweh. Therefore Yahweh has delivered him to the lion, which has mauled him and slain him, according to the word of Yahweh, which he spoke to him.”(1Kings 13:23-26)

Lions were not uncommon in those days before the Romans, who through their extravagance, depopulated the Middle East of lions. But his lion is no ordinary lion. This lion is a lion of Yahweh.

He went and found his body cast in the way, and the donkey and the lion standing by the body. The lion had not eaten the body, nor mauled the donkey. (1Kings 13:28)

Just as the man of God had been asked not to eat, so too, the lion was obedient and did not eat. Rather the lion and the donkey contrary to their natural instincts stood guard over the body. 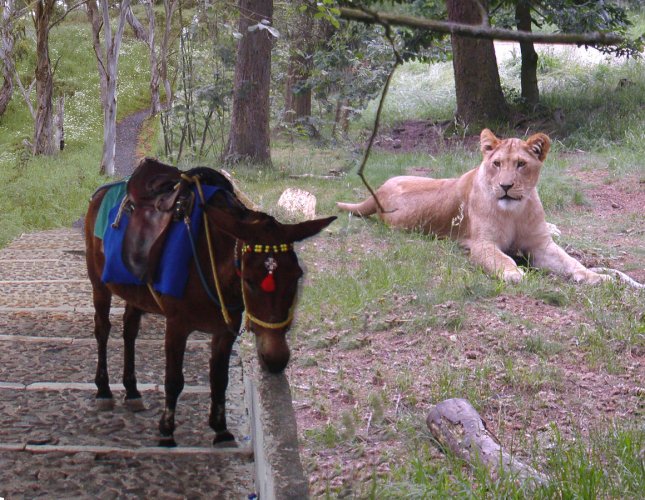 This is a compond illustration combining a donkey from Greece with a lion in a zoo in Denmark. It is to give a sense of how remarkable events were. In the events recorded the lion 'stands', this is out of character as lions, like cats, mostly sit when not doing things.

The false prophet took the body of the man of God and buried it in Bethel,

“For the saying which he (the man of God) cried by the word of Yahweh against the altar in Bethel, and against all the houses of the high places which are in the cities of Samaria, will surely happen.” (1Kings 13:32)

How to recognise the false prophets

These events show us in clear relief how a lie can kill us. The word of God and his commands were simple. They were easy to understand.

We need to read the word of God ourselves to know and understand the simple commands given. Once we have understood the word of God, we should see the contradictions of the false prophets , teachers and preachers who don't truly believe the word of God themselves.

But many people may see the contradictions presented by false teachers but want to believe their lie, as it's a nice, convenient, comfortable lie, letting them do what they want. No liar would try to sway you by presenting an unpalatable alternative to the hard truth.

If this man was condemned, will we be held guiltless if we accept a preacher's words that contradict the simple and clear written word of God?

We need to be wary of accepting the word of a Bible teacher who speaks from their own doubts. We need to be wary of accepting another's word, like the man of God slain by the lion, because it seems desirable to us. It was only because it seemed desirable to Eve personally that Eve listened to the serpent's words. Paul speaks of the ease with which people accept false ideas,

But I am afraid that somehow, as the serpent deceived Eve in his craftiness, so your minds might be corrupted from the simplicity that is in Christ. For if he who comes preaches another Jesus, whom we did not preach, or if you receive a different spirit, which you did not receive, or a different “good news”, which you did not accept, you put up with that well enough. (2Corinthians 11:3-4)

For more on false prophets The False Prophet

For more on unusual lions The lion Christian