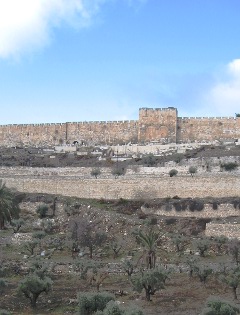 Israel has had a take 'notice over' its government for over two years now since Netanyahu lost leadership, though multiple elections and unlikely combination of unstable coalitions and chaotic campaigns, and now protest, as Netanyahu again leads a Government. What is the world to take notice of? God's word!

I will bring again the captivity of my people of Israel, and they shall build the waste cities, and inhabit them; and they shall plant vineyards, and drink the wine thereof; they shall also make gardens, and eat the fruit of them. And I will plant them upon their land, and they shall no more be pulled up out of their land which I have given them, saith the LORD thy God. (Amos 9:14-15)

After what seems a struggle much greater than the angel Michael's with the prince of Persia (Dan 10:13), new forces from the Mountains of Israel have emerged as 'king-makers' in Israel.

Two men have emerged Bezalel Smotrich and Itamar Ben-Gvir, who have taken power – and wish to open the gates for a building boom on the mountains – and to increase security on the Mountains.

PM’s approval will only be needed at an initial stage in planning process and not at every step of the way, as is currently the case.

A resident of the Kedumim settlement, Smotrich has long advocated for massively expanding settlements and for annexing large parts of the West Bank without granting equal rights to Palestinians in those areas. He has also called for dismantling the Civil Administration, arguing that settlers in the West Bank should be governed by civilian bodies, just like civilians in Israel proper.

If Smotrich is a problem – he is nothing when compared to the final man needed by Netanyahu to form government: Ben Gvir.

Ben Gvir is from Hebron. He is a Judean.

In that day will I make the governors of Judah like an hearth of fire among the wood, and like a torch of fire in a sheaf; and they shall devour all the people round about, on the right hand and on the left: and Jerusalem shall be inhabited again in her own place, even in Jerusalem. (Zech 12:6)

Ben Gvir as a fire has already caused international incident in visiting the Temple Mount. As if to directly fulfil the ancient prophecy the secular TOI headlined

Ben Gvir is a pyromaniac, but it’s Netanyahu who has given him the matches

Itamar Ben Gvir has always been a provocateur and a pyromaniac. He has spent decades stirring trouble — from brandishing the hood ornament he stole off of prime minister Yitzhak Rabin’s Cadillac in 1995 to brandishing his pistol during a confrontation with Arabs in East Jerusalem three months ago, with innumerable acts of rabble-rousing, dozens of indictments, and several convictions for incitement and racism-related offenses in the quarter-century in between.

The God of the Bible says 'be amazed!' as I will take Jews from all over the world and plant Jews in their land. It's not hidden. Since it began happening a collective howl has gone up to the political heavens.

No nation on earth has as many leaders telling they can't build in their historic heartland, because it's un-peaceful (when there are actually active wars nobody cares about in Yemen, Afghanistan or Africa). Hebron is where the ancestors of the Jewish people are buried. Judea and Samaria the centre of ancient events. There was nothing ever before at Tel Aviv, but sand. All the anti Israel protest has done is to make all aware of God's work there against all odds and opposition. The haters of the Bible do the most to show the truth of the Bible!

We had wondered at the political improbability and impasse, all the seventh year. Then we have the promise to build on the mountains in the beginning of the first year, with this new government led by Netanyahu.

Legalizing currently unrecognized Jewish communities in Judea and Samaria and connecting them to electricity and water is reportedly first on Ben-Gvir’s agenda. Otzma Yehudit party leader Itamar Ben-Gvir’s coalition agreement with Prime Minister-elect Benjamin Netanyahu includes a condition that the government will immediately move to legalize some 60 Jewish communities in Judea and Samaria... the legalization process of presently unrecognized settlements to begin within 60 days of the swearing-in of a new right-wing government.

We have a return to Jewish values including in Education

We have Ben Gvir being invited to the UAE (who seek influence in Israel). (After which the UAE was so upset at Ben Gvir, visiting the Mount they collaborated with China to censure him at the UN.)

Then also we have the increase in the arrival of Jews.

The most olim in more than two decades arrived in Israel this year, representing a dramatic increase from 2021.

Some 70,000 people from 95 different countries immigrated to Israel in 2022 with the assistance of the Jewish Agency for Israel, in cooperation with the Ministry of Aliyah and Integration.

The First Year after the Seventh Year 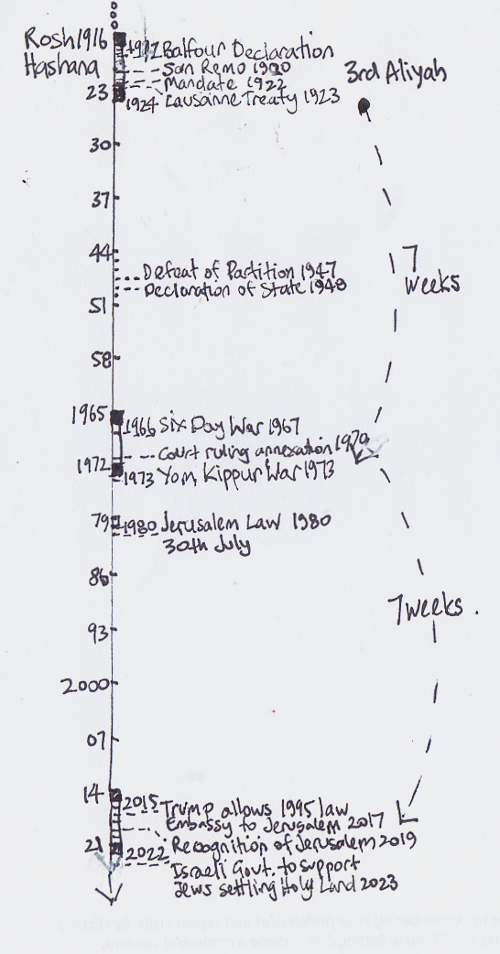 Some years ago we examined the eras of the nations and understood that for Israel the seventh sabbatical Shmita year was one of rest. We noticed a pattern were the first year in the cycle was one of renewed grow. It was so clear a pattern that it could not be a coincidence. When we wrote the 6th week had ended since 1967, and looked to the end of the 7th, we could not think that we would be looking at the 8th week ending in 2022, yet we had multiple times end of eras in 2021/22 and 2023

We might be rather hopeful that from 1973 Yom Kippur there has been 7 weeks that fit Newton's understanding from Daniel. Or that it has been 70 weeks since Suleiman's decree in the more recent era.

We are told some times of the nations, but they have always seemed nearer to the hopeful than their eventual appearance in fulfilment. In any case nobody knows the time of our Lord's return.

We have a sudden influx of people and legalisation of 60 settlements on the Mountains of Israel. We also have move to return of Jews to their historically bought land and houses.

If it isn't some kind of Jubilee, it points to a pattern.

There are now many discussions of Israel's legal position based on events 100 years ago. I have read a new book by Abraham A Sion and Ted Belman writes on the front page of Arutz Sheva, Israel National News 6 Jan 2023

The high mark of the rights of the Jews to Palestine, formerly known as Judea for 1,000 years, was not the 1917 Balfour Declaration, it was just a declaration, but the San Remo Resolution of 1920.

The San Remo conference was from 19-26 of April 1920, with the agreement as to the disposal of the Ottoman territory was finalised on the 25th. The matters were ratified in the Lausanne Treaty which ended the war on July 24, 1923.

Taking the argument that San Remo was greater than Balfour, then San Remo being adopted by the UN as the Mandate into International Law is an ever higher mark - 'the most important of all' (Abraham A Sion, To whom was the Promised Land Promised? 2020 p 190.)

The Mandate was confirmed by the Council of the League of Nations 24 July 2022. 100 years ago.

So unique is this thrice confirmed intent that Jews may settle their ancient lands – no other People in a nation has such a legal entitlement in International Law.

The great irony is that none who call the settlement of Jews in their ancient land 'Illegal' in international law - have legal right in law to their ancestors settling – anywhere.

It is significant that now after 100 years the call by Jews goes forth to recognise the Mandate and San Remo as International Law. I will show you something -see on the timeline all the 7th years of rest and the significant first years: so you see the pattern? It's an overlapping 8 'week' pattern, with 7 'weeks' inside. Nothing ever happens on a day.

Now is the time – to sow

Now there are enough Jews. Now they are saying, we need more housing. The new Minister for Construction says,

“The housing problem is common to everyone and with God's help we will help everyone." Regarding construction in Judea and Samaria, Goldknopf promised to, "help our brothers who are settling in Judea and Samaria, and as I witnessed during my pre-election visits there, part of the solution to the housing crisis is found in these areas.” (INN)

The population increased 16.5 in 5 years.

For thy waste and thy desolate places, and the land of thy destruction, shall even now be too narrow by reason of the inhabitants, and they that swallowed you up shall be far away. The children which thou shalt have, after thou hast lost the other, shall say again in thine ears, The place is too strait for me: give place to me that I may dwell. (Isaiah 49:19-20)

Now is the time as it is a first year. In a seventh year there should be no planting. Will Yahweh Elohim plant people when his law asks the people not to plant? The 7th Shmita (7th year) was from Rosh Hashanah (evening 6 Sept) 2021 to Rosh Ha Shana (evening 25 Sept)2022. The Israeli elections that set the tone for the first year of the cycle were held on 1 November 2022, with their lists being finalised 15 September, just before the new year of planting – God's planting- on the mountains of Israel.

Behold, the days come, saith the LORD, that I will sow the house of Israel and the house of Judah with the seed of man, and with the seed of beast. And it shall come to pass, that like as I have watched over them, to pluck up, and to break down, and to throw down, and to destroy, and to afflict; so will I watch over them, to build, and to plant, saith the LORD. (Jeremiah 31:27-28)