Secular Europe has been antagonistic of Christianity in a political guise, and since the French Revolution, Napoleon and Garibaldi, has restricted its political power. Secular Europe arose initially from non-conformist Christianity influenced by Jewish thinking, with arguably the Socinians much published call for freedom of conscience to read the Bible having much to do with the effectiveness of the Enlightenment.

Though antagonistic, secular forces are often in agreement with politically re-born Catholic Christianity in regard to preserving European culture from Islamic influence. Having used the power of Catholicism to topple communism in Poland, secular Europe has found it rather useful to deal with an Islamic presence. After all, the dominant Western European secular culture of the last 200 years, which won out finally after World War II, has been a remarkable aberration of all their previous history. If you like, an almost inexplicable 'blip' of dramatic difference. Catholic Christianity with a strategy of ecumenical tolerance is uniting people and stepping back into its historic place.

This illustration captures the always elusive essence of that mind's image I had. 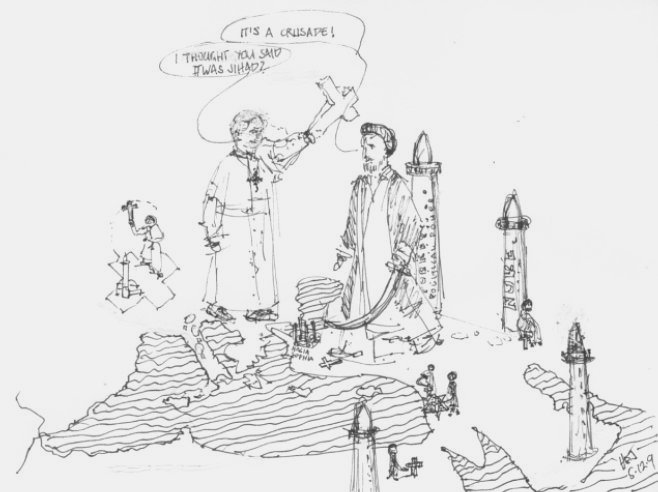 Power, politics and the control of minds. There is a political consciousness that there were people calling themselves Christians in ancient Damascus and Babylon, even before they were persecuted in Rome (that their leaders were Jews merely underlines the point). Many early Christian heartlands are increasingly militant Islamic Muslim, as migration from violence and assimilation reduces the percentage of Christians (Iraq, Gaza, and Lebanon are examples).

Islamic Iran in reaching out to Lebanon, Syria, and now Turkey (which was part of the Byzantine Empire) is stepping towards Europe. But the Vatican now seeks to increase the influence of its Christianity in the Middle East. Both Islamic Iran and the Vatican have no less that global religious domination as an aim.

If people think this is a simple confrontation, they would be wrong. There are geo-political undercurrents that the leaders of both religions respect and play to (if you want to dye the largest area of sea your colour you need to find the widest and strongest currents to pollute). Russia's leaders both visit the Vatican, and, are happy to use Iran as part of a chess game against American influence, or perhaps, their opposition to sanctions against Iran's nuclear program is merely an expression of perceived mutual advantage (see Putin: Russia has no reason to doubt Iran). As Russia and Europe do not wish to offend Persia, the religions play out a complex confrontation.

Thus said the Lord GOD; Lo, I am coming to deal with you, O Gog, Rosh (chief/head. In Danish translation Rosj, an Old Slav name meaning 'river') prince of Meshech and Tubal: And I will turn you around, and put hooks into your jaws, and I will lead you out with all your army..all of them wielding swords: Persia, Ethiopia and Libya with them: (Ezekiel 38:3-5 JPS )

Is this unlikely? But wasn't Communist Russia numbered with the “Allies” in WW2? There can be only one reason for an alliance of antagonists; a common enemy.

The Islamic clerics have named Judaism in Jerusalem (and Judea or occasionally all Israel) as an enemy. But their noisy disorganized enmity is nothing compared to the subtlety of the silent strategic enmity of a re-born, resurrected political efficiently-Germanic European Constantinian Christianity. Listen to what they do, or do not do, not what they say. 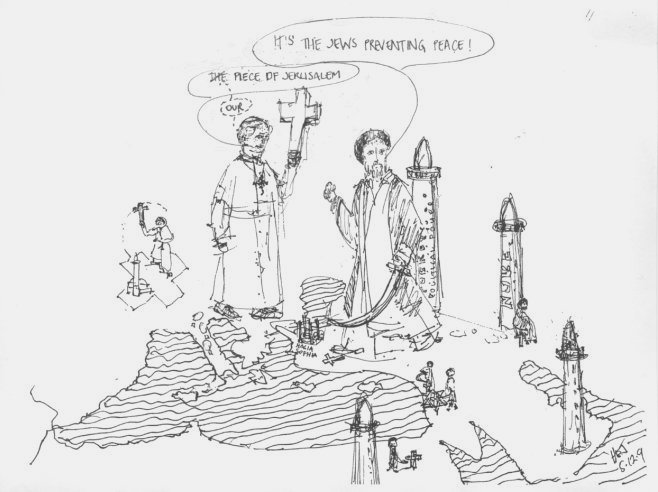 They that have eyes to see, will see and in seeing, hear what they do.