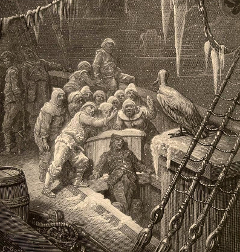 It has been my thought that leadership in this age is not a blessing, but a curse. Better to be in opposition than government in the age of distress of nations as the powers of heaven (the rulers) are shaken as we approach Christ's return. Obtaining the White House in the US 2020 election turns out to become a curse.

Curse not the king, no not in thy thought; and curse not the rich in thy bedchamber: for a bird of the air shall carry the voice, and that which has wings shall tell the matter. (Ecclesiastes 10:20)

Toward the end of last year Angelides UK Brexiteer of Liberty Nation in America observed The Biden Curse and referencing Coleridge’s epic 1834 poem, The Rime of the Ancient Mariner, asked Has the administration become a political albatross?

Heavy is the head that wears the crown, and for President Joe Biden, the cost of leadership has, indeed, been a great burden. Escalating crises that disappear from public view only when the next disaster elbows its way to the front have taken the shine from early positive approval ratings…Biden himself is so tainted by present circumstances and past folly that he is considered a potential liability...The American left has grown ever more deeply divided...

The Guardian (now global but begun in Liberal Manchester, UK) might be somewhat more clear eyed in the US than an American. David Smith is the Guardian's Washington DC bureau chief. He headlines

BIDEN’S‘CURSED PRESIDENCY In his 14 months in office, the US president has grappled with Covid, inflation, the Russia-Ukraine war and energy prices – and seemingly can't catch a break..

“Biden has a cursed presidency,” observed Larry Jacobs, director of the Center for the Study of Politics and Governance at the University of Minnesota. “He’s gotten nailed by the continuation of Covid, by inflation being out of control, by a lunatic leader in Russia and now soaring energy prices that are hitting voters...”

Republicans have also condemned the White House for reportedly considering deals with autocratic regimes for a back-up oil supply, undermining Biden’smoral authority at a critical moment on the world stage.

Biden, while speaking about leadership of the new world order, has not taken leadership on Ukraine with France, Turkey and Israel doing much more. Other nations leaders recently allegedly would not take Biden's phone calls seeking oil. The UAE insulted the US by welcoming Syria's Assad. The Americans were not seen in the historic meeting of Bennett and the UAE Crown Prince with Sisi in Egypt.

The Biden Administration was trying to use its influence to cajole China into siding against Russia. When this did not go well they whacked sanctions on them for the treatment of Uyghurs. It is being revealed now under Biden that China, made wealthy by foolish Americans, feels it may treat the Americans as they see fit. One may feel Xi's CCP feels aggrieved as they may have thought they had bought the Biden Administration. But India is embarrassing Biden by buying Russian oil in Rupees. More so as more than half the world refused to follow Biden's weak sanctions of Russia, and condemn Russia at the UN.

Liberty Nation's Angelides observed in Biden And Ukraine: Peacemaker Or Bystander, Any opportunity to become a peacemaker has long gone. Joe Biden has left himself open to criticism from politicians both at home and abroad. His hesitancy – whether it will prove to be the right move or the wrong – has emboldened Putin and China and cast confusion among NATO allies (consider the volte-face on Poland’s MiG 29s).

Bloomberg quotes Niall Ferguson who sees Europe's need for Russian energy will collide with international support for Ukraine. The Biden Administration two weeks into the war is still seeking to convince European allies to join "in imposing further sanctions on Russia and tightening the existing sanctions to crack down on evasion and to ensure robust enforcement."Niall Ferguson opined, “the Biden administration is making a colossal mistake”

Larry Jacobs whose words captured our attention by being quoted by the Guardian, as a political observer sees the curse as accidental, as being in the wrong place at the wrong time, yet the opinion polls suggest that most Americans (63%) see Biden as the cause of their woes from increasing costs. Democrats faceheadwinds with voters as they are being held responsible for record-high inflation, skyrocketing gas prices, and out-of-control spending.

Afghanistan collapsed. Inflation is soaring. Job creating slowing.Consumer confidence falling. China is getting more aggressive in the Taiwan Straits. The border is an absolute fiasco. COVID vaccinations have cratered. And Joe Biden is AWOL on everything. A growing number of likely voters believe that cheating tainted President Joe Biden’s 2020 win over former President Donald Trump, and even more feel that a key Democratic election reform scheme will increase fraud. In the latest Rasmussen Reports survey, 56% of respondents said, "It’s likely that cheating affected the outcome of the 2020 presidential election, including 41% who say it’s ‘very likely.’” That is a significant increase from April, when 51% said “Biden’s election was tainted by cheating.” (townhall.com)

Right from the beginning 19 March 2021 there were race relations issues with a mass shooting targeting Asians in Atlanta, whereupon Biden in going to Atlanta fell down three times going up the stairs of Air Force One. (nypost.com)

Biden's daughter's forgotten-found allegedly stolen diary is still having ramifications as the efforts to suppress Project Veritas who had obtained it (and from where it likely leaked), likely have infringed American liberties. But the ever present scandal of Biden's son's known connections to Gas in Ukraine is deepening with a forgotten laptop being verified by the New York Times and Daily Mail revealing Biden's connections to also to Ukrainian Biolabs that may have been one factor in Russia invading Ukraine.

Why has this curse come? It could be that it is time and chance.

I returned, and saw under the sun, that the race is not to the swift, nor the battle to the strong, neither yet bread to the wise, nor yet riches to men of understanding, nor yet favour to men of skill; but time and chance happeneth to them all. (Ecc 9:11)

But in the time and chance under the sun, Yahweh Elohim shows mercy and

The horse is prepared against the day of battle: but safety is of the LORD. (Proverbs 21:31)

By the blessing of the upright the city is exalted: but it is overthrown by the mouth of the wicked. (Proverbs 11:11) and no matter how evil the time,

It is God that girds me with strength, and makes my way perfect. (Psalm 18:32)

In addition, whether there appears 'under the sun' to be mere time and chance, success that matters is from Yahweh Elohim.

For promotion cometh neither from the east, nor from the west, nor from the south. But God is the judge: he puts down one, and sets up another. For in the hand of the LORD there is a cup, and the wine is red; it is full of mixture; and he pours out of the same: but the dregs thereof, all the wicked of the earth shall wring them out, and drink them. (Psalm 75:6-8)

But there is more. It is known that no matter what side of American politics or how pro-Israel they are in word or deed, the US President cannot publicly touch Israel the apple of Yahweh Elohim's eye negatively without a major storm!

Already Biden was given Broken Glass for opposing God 's work in Israel as VP. See Biden unable to undo Trump's-policy As they sought to divide Israel, so Ukraine is now being divided as America is divided.

On Nov 23, 2021, after I heard the Biden Admin thought it had made progress on the Iran deal I wrote privately to an American the following:

“It will not turn out well for the Biden Admin- the curse is coming where nothing will go well and devastating storms will be sent. They can't say that they love Israel and not believe that the Iranians aren't going to wipe the lot out - man, woman and child! Our Creator knows the hearts- I know this is so because of the broken glass given by Netanyahu to Biden. I saw it on TV. I will never forget it. They cannot stop Jews building as God has said they will build on the mountains. Its in Ezekiel ...so they cannot touch God's land. They can mess with Haiti and make a mess there or in Ukraine.. but as Gamaliel said don't mess with God..

> And now I say unto you, Refrain from these men, and let them alone: for if this counsel or this work be of men, it will come to nought: But if it be of God, ye cannot overthrow it; lest haply ye be found even to fight against God. > (Acts 5:38-39)

It will affect you in the end as the whole nation will suffer.

The curse has come; the curse of those that curse Abraham's seed (Numbers 22:12). The curse was seen first by those critical of Biden. Now it is seen even by those who would wish not to see it who have made it a headline.

Now all the world can see a secular base Jew of corrupt Ukraine is elevated and hailed 'as leader of the free world'. Israel's leader Bennett is a mediator with and between Russia and Ukraine, replacing the American role as leader, as I write speaking openly with Putin.

In addition in an amazing turn of fortune Israel even mediates between America and the offended Emirates. Now China and India (with no love of each other, or for Russia!) are breaking the American petro-dollar due to advantage in bypassing poorly thought out American sanctions. As payment for EU gas is to be now in Roubles, even the EU, no matter how they may desire to be free of Russia, is forced into breaking with the American petro-dollar.

Unless the anti-Israel pro-Iran policy departs, the curse will grow as there are greater things yet to be broken. As yet the US stock market has held, but it is a Jewish seventh year, and there is likely much more debt yet to be 'forgiven' which is never viewed well by the US Stock Market.

For I am the LORD thy God, the Holy One of Israel, thy Saviour: I gave Egypt for thy ransom, Ethiopia and Seba for thee. Since thou wast precious in my sight, thou hast been honourable, and I have loved thee: therefore will I give men for thee, and people for thy life. Fear not: for I am with thee: I will bring thy seed from the east, and gather thee from the west; I will say to the north, Give up; and to the south, Keep not back: bring my sons from far, and my daughters from the ends of the earth; Even every one that is called by my name: for I have created him for my glory, I have formed him; yea, I have made him. Bring forth the blind people that have eyes, and the deaf that have ears. Let all the nations be gathered together, and let the people be assembled: who among them can declare this, and shew us former things? let them bring forth their witnesses, that they may be justified: or let them hear, and say, It is truth. (Isaiah 43:3-9)