3) The Pool of Siloam

Traditionally at the Jewish Feast of Tabernacles (In Hebrew known as Sukkot), water from the Pool of Siloam was poured out before the Altar and the words from Isaiah 12 were sung. It reminded the nation that they had to place complete trust in Yahweh and the promise of salvation revealed by his name, “He will be who He will be”, and in the writings regularly read to them. Yahweh requires the faithful to acknowledge him before the people and trust in him, as he is the only source of salvation and life.

And in that day shall ye say, Praise the LORD, call upon his name, declare his doings among the people, make mention that his name is exalted.
Behold, God is my salvation; I will trust, and not be afraid: for the LORD Yahweh is my strength and my song; he also is become my salvation.
Therefore with joy shall ye draw water out of the wells of salvation.

And in that day shall ye say, Praise the LORD, call upon his name, declare his doings among the people, make mention that his name is exalted.
Sing unto the LORD; for he hath done excellent things: this is known in all the earth.
Cry out and shout, thou inhabitant of Zion: for great is the Holy One of Israel in the midst of thee. (Isaiah 12:1-6) 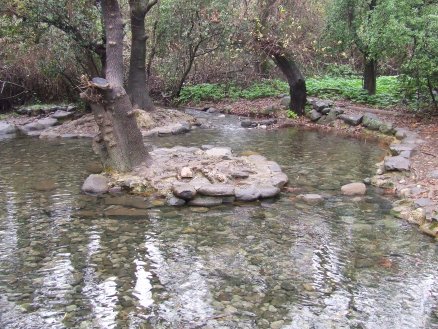 The Messiah, who had been “sent” to the nation of Israel during the Roman occupation of their land, was the “holy one in the midst” of them and not acknowledged by them. He made an allusion to Isaiah 12, when on the last day of the Feast of Tabernacles (Sukkot), he stood in the Temple and declared his Messiahship and referred to the scriptures, which prophesied of him.

In the last day, that great day of the feast, Jesus stood and cried, saying, If any man thirst, let him come unto me, and drink.
He that believeth on me, as the scripture hath said, out of his belly shall flow rivers of living water. (John 7:37-38)

The New Testament presents a very interesting incident related to the pool of Siloam and the significance of the verse just quoted. It involves a blind man, who, we could say, was a sign to the leaders in Israel. In John 8: 59, after a confrontation with the Jewish leaders Jesus left the Temple. It would appear that this blind man was in the vicinity of the Temple.

Then took they up stones to cast at him: but Jesus hid himself, and went out of the temple, going through the midst of them, and so passed by. (John 8:59)

And as he passed by, he saw a man which was blind from birth.
And his disciples asked him, saying, Master, who did sin, this man, or his parents, that he was born blind?
Jesus answered, Neither hath this man sinned, nor his parents: but that the works of God should be made manifest in him. I must work the works of him that sent me, while it is day: the night cometh, when no man can work. As long as I am in the world, I am the light of the world.
When he had thus spoken, he spat on the ground, and made clay of the spittle, and he anointed the eyes of the blind man with the clay,
And said unto him, Go, wash in the pool of Siloam, (which is by interpretation, Sent.) He went his way therefore, and washed, and came seeing. (John 9:1-7)

The Pharisees, who accused Jesus of being a sinner for healing on the sabbath, did not recognise that the “Holy One was in their midst”, as Isaiah 12:6 had prophesied. They were blinded by the eye of the flesh, of pride in their position and lack of understanding of the Law, the Psalms and the Prophets, whose writings they should have understood and expounded to the people. Of all the people in Israel they should have recognised and acknowledged their Messiah. Jesus had used the figure of blindness to describe the Pharisees' lack of understanding of the scriptures. Isaiah had described those who should have been concerned with the spiritual welfare of the people in the following way.

His watchmen are blind: they are all ignorant, they are all dumb dogs, they cannot bark; sleeping, lying down, loving to slumber.
Yea, they are greedy dogs which can never have enough, and they are shepherds that cannot understand: they all look to their own way, every one for his gain, from his quarter. (Isaiah 56: 10-11)

Jesus used the same figure in reference to the Pharisees in response to his disciples' comments about the Pharisees' attitude towards him.

Then came his disciples, and said unto him, Know thou that the Pharisees were offended, after they heard this saying?
But he answered and said, Every plant, which my heavenly Father hath not planted, shall be rooted up.
Let them alone: they be blind leaders of the blind. And if the blind lead the blind, both shall fall into the ditch. (Matthew 15: 12-14)

Note that in John's account of the healing of the blind man, John gives the meaning or interpretation of the word Siloam as 'sent'. The name Siloam originally applied to Hezekiah's aqueduct which allowed the water of Gihon, outside Jerusalem's walls to flow into the city to sustain life in the city. Jesus had been”sent” to the nation of Israel to save those who would listen and hear the words of Yahweh but the Pharisees were blinded, unable to see and accept Jesus as their Messiah.

The blind man, who possibly spent time in close proximity to the Temple, and listened to the reading of the Word, did recognise the Messiah. 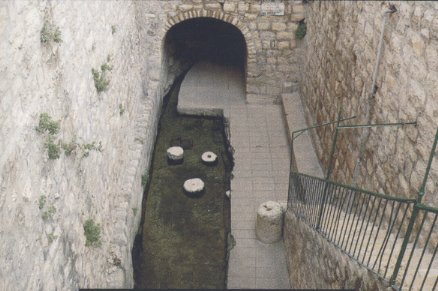 In this instance, this miraculous cure involved that which came from the mouth of the Lord and was mixed with the dust of the ground. Man was created from the dust of the ground and the Lord typically places the flesh/human nature on the blind man's eyes. He is then 'sent' to wash it off in the Pool of Siloam (by interpretation 'sent'). The scribes and Pharisees were looking at the Lord with flesh covered eyes. They were looking for the Messiah of their choice. They were not prepared to look at the Lord with the eyes of the spirit and of faith, which comes through the understanding of the written word.

On the other hand, the blind man, figuratively representing those like the Pharisees who did not recognise the power and authority of the Son of God, had obviously listened to the words read regularly in the Temple and heard the words of the Lord. He saw with the eye of faith and obeyed the Lord's command to wash in the Pool of Siloam. He saw physically but more importantly he saw with the eye of faith. The blind man, his family and friends would have had overwhelming joy that the man born blind could now see. Only a small number within the nation of Israel sought the “water of life” from their Messiah.

This was a reflection of the attitude of the people described by Isaiah when the nation trusted in other nations and the arm of flesh rather than in Yahweh. The nation had suffered then with the Assyrian invasion and were destined to suffer again in AD70.

Forasmuch as this people refuseth the waters of Shiloah that go softly, and rejoice in Rezin and Remaliah's son;
Now therefore, behold, the Lord bringeth up upon them the waters of the river, strong and many, even the king of Assyria, and all his glory: and he shall come up over all his channels, and go over all his banks: And he shall pass through Judah; he shall overflow and go over, he shall reach even to the neck; and the stretching out of his wings shall fill the breadth of thy land, O Immanuel. (Isaiah 8:6-8)