In explaining how he received his sight, the blind man used the image of the clay and the water, as used by the potter.

The neighbours therefore, and they which before had seen him that he was blind, said, Is not this he that sat and begged?
Some said, This is he: others said , He is like him: but he said, I am he .
Therefore said they unto him, How were thine eyes opened?
He answered and said, A man that is called Jesus made clay, and anointed mine eyes, and said unto me, Go to the pool of Siloam, and wash: and I went and washed, and I received sight. (John 9: 8-11)

The Pharisees, wanting to find some accusation against Jesus also sought the man and interrogated him. When the Pharisees questioned the man, he again uses the image of clay, moistened from Jesus' mouth and the waters of the Pool of Siloam. Some of the Pharisees accused Jesus of being a sinner because he had not kept the sabbath. The cured man immediately states that he was undoubtedly a Prophet. He recognised the power of Yahweh was needed for such a miracle.

Then again the Pharisees also asked him how he had received his sight. He said unto them, He put clay upon mine eyes, and I washed, and do see.
Therefore said some of the Pharisees, This man is not of God, because he keepeth not the sabbath day. Others said, How can a man that is a sinner do such miracles? And there was a division among them.
They say unto the blind man again, What sayest thou of him, that he hath opened thine eyes? He said, He is a prophet.
But the Jews did not believe concerning him, that he had been blind, and received his sight, until they called the parents of him that had received his sight. (John 9:15-18)

The man on further questioning again asserts that Jesus was a prophet. The Pharisees again assert that he was a sinner.

Then again called they the man that was blind, and said unto him, Give God the praise: we know that this man is a sinner.
He answered and said, Whether he be a sinner or no , I know not: one thing I know, that, whereas I was blind, now I see. (John 9: 24-25)

The Pharisees claimed that they were Moses' disciples.

Then they reviled him, and said, Thou art his disciple; but we are Moses' disciples.
We know that God spake unto Moses: as for this fellow , we know not from whence he is. (John 9: 28-29)

If they indeed were Moses' disciples they would have known that Moses had prophesied that a greater than Moses would arise to redeem the people.

The LORD thy God will raise up unto thee a Prophet from the midst of thee, of thy brethren, like unto me; unto him ye shall hearken; (Deuteronomy 18:15) 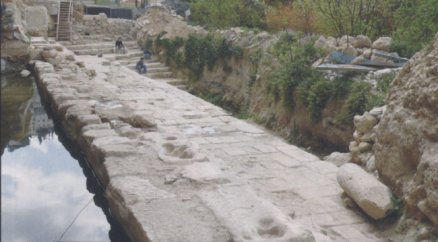 The enlightened man shows his understanding and recognition of the power at work in their midst.

The man answered and said unto them, Why herein is a marvellous thing, that ye know not from whence he is, and yet he hath opened mine eyes.
Now we know that God heareth not sinners: but if any man be a worshipper of God, and doeth his will, him he heareth.
Since the world began was it not heard that any man opened the eyes of one that was born blind.
If this man were not of God, he could do nothing.
They answered and said unto him, Thou wast altogether born in sins, and dost thou teach us? And they cast him out. (John 9: 30-34)

Jesus revealed himself to the man born blind, whose faith is shown in his response to Jesus.

Jesus heard that they had cast him out; and when he had found him, he said unto him, Dost thou believe on the Son of God?
He answered and said, Who is he, Lord, that I might believe on him?
And Jesus said unto him, Thou hast both seen him, and it is he that talketh with thee.
And he said, Lord, I believe. And he worshipped him. (John 9: 35-38)

The leaders of Israel were blind in the sense that they failed to recognise their Messiah, because they did not really understand their scriptures. They were conscious of their position and were more caught up in the ritual of their traditions and worship. They thought that they understood, but they did not. On the other hand, the man born blind represented the extension of the hope of salvation that was about to be extended to the nations, the Gentiles, that had formerly been in darkness and ignorance.

And Jesus said, For judgment I am come into this world, that they which see not might see; and that they which see might be made blind.
And some of the Pharisees which were with him heard these words, and said unto him, Are we blind also? (John 9: 35-40)

Moses, also using that image of blindness, had long ago warned the nation of Israel that terrible judgements would come upon them if they turned from their God.

The LORD shall smite thee with madness, and blindness, and astonishment of heart:
And thou shalt grope at noonday, as the blind gropeth in darkness, and thou shalt not prosper in thy ways: and thou shalt be only oppressed and spoiled evermore, and no man shall save thee. (Deuteronomy 28:28-29)