In the era of the Judges due to the sins of Israel, and not removing the Canaanites as commanded (which became 'thorns' Numbers 33:55) they found they were always fighting wars. In the time of Samuel when the priests were sinners, the matter was so acute the people demanded that they have a king to go before them into battle (I Sam 2:20) In I Samuel 12:12 Samuel says they asked a king due to Nahash king of Ammon attacking them. But the Ammonites were only one enemy. Saul was always at war and died in battle. 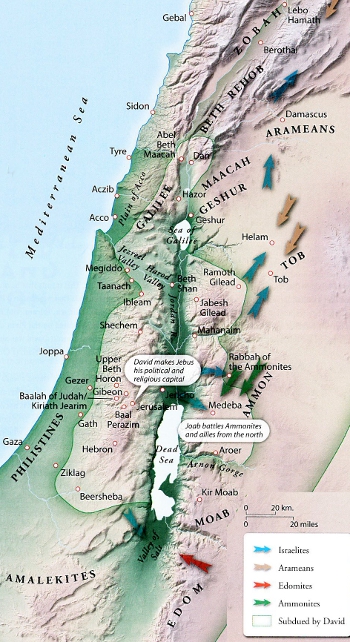 So Saul took the kingdom over Israel, and fought against all his enemies on every side, against Moab, and against the children of Ammon, and against Edom, and against the kings of Zobah, and against the Philistines: and whithersoever he turned himself, he vexed them. And he gathered an host, and smote the Amalekites, and delivered Israel out of the hands of them that spoiled them. (1Samuel 14:47-48)

Asaph in his Psalm speaks in the present tense of a threat, perfectly in keeping with his King's era of warfare. This warfare continued from the wars in the era of Saul. David's era was so filled with wars, that he shed much blood.

But the word of the LORD came to me, saying, Thou hast shed blood abundantly, and hast made great wars: thou shalt not build an house unto my name, because thou hast shed much blood upon the earth in my sight. (1Ch 22:8 also cp 28:3)
Solomon sent to Hiram, saying, Thou know how that David my father could not build an house unto the name of the LORD his God for the wars which were about him on every side, until the LORD put them under the soles of his feet. (1Kings 5:2-3)

We are not told specifically of a major singular battle, but it may be gathered from the wars of Saul and David there was, if not a confederacy, an agreement among the enemies to fight Israel! We know David fought Edom, Moab, Ammon, Amalek and the Philistines

Them also king David dedicated unto the LORD, with the silver and the gold that he brought from all these nations; from Edom, and from Moab, and from the children of Ammon, and from the Philistines, and from Amalek. (1Chron. 18:11)

Which also king David did dedicate unto the LORD, with the silver and gold that he had dedicated of all nations which he subdued; Of Syria, and of Moab, and of the children of Ammon, and of the Philistines, and of Amalek, and of the spoil of Hadadezer, son of Rehob, king of Zobah (in Syria). And David gat him a name when he returned from smiting of the Syrians in the valley of salt, being eighteen thousand men. And he put garrisons in Edom; throughout all Edom put he garrisons, and all they of Edom became David's servants. Yahweh preserved David whithersoever he went. (2Samuel 8:11-14)

Whereas Saul failed in the matter of Amalek (1 Sam28:18), David was so successful against Amalek they are never mentioned afterwards.

The Syrians who David fought are not mentioned in Psalm 83 which refers to the Assryians which in Hebrew is 'Asher' a totally different name to Aram.

Psalm 83 also names Tyre. When David takes Jerusalem from the Jebusite, Hiram the king is ready to support David

Hiram king of Tyre sent messengers to David, and cedar trees, and carpenters, and masons: and they built David an house. (2Samuel 5:11)

Whether the people of Tyre were with their king may be another matter. It is possible the 'inhabitants of Tyre' mentioned in Psalm 83 were helping the enemies of Israel, though also some at least were supplying King David timber.

Also cedar trees in abundance: for the Zidonians and they of Tyre brought much cedar wood to David. (1Ch 22:4)

One point of consideration is that Israel did evil in the era of of the Judges serving among others, the gods of Zidon (Judges10:6) and

The Zidonians also, and the Amalekites, and the Maonites, did oppress you; and ye cried to me, and I delivered you out of their hand. (Judges 10:12)

The Hagarenes are not often mentioned (6 times) but they are defeated in the days of Saul.

In the days of Saul they made war with the Hagarites, who fell by their hand: and they dwelt in their tents throughout all the east land of Gilead. (1Chronicles 5:10)

The Hagarenes were conquered and at least one served David

Over the camels also was Obil the Ishmaelite: and over the asses was Jehdeiah the Meronothite: And over the flocks was Jaziz the Hagerite. All these were the rulers of the substance which was king David's. (1Ch 27:30-31)

After this point the Hagarites/enes vanish. We see also an Ishmaelite served David.

The Ishmaelites of Psalm 83 are also Midianites (Judges 8). We do not know if the Midianites after their defeat by Gideon, or the Ishmaelite traders, were also confederate in the days of David with those of Edom, Moab and Amalek - it is possible. Asaph would have known the history of his people. The victory over the Ishmaelites of Midian is described.

They took two princes of the Midianites, Oreb and Zeeb; and they slew Oreb upon the rock Oreb, and Zeeb they slew at the winepress of Zeeb, and pursued Midian, and brought the heads of Oreb and Zeeb to Gideon on the other side Jordan. (Jdg 7:25)

This history is highly significant as Asaph references Midian's fate. The second part of Psalm 83 speaks of Asaph's prayer for the end of the all the enemies of Israel to be like Midian's.

Do unto them as unto the Midianites; as to Sisera, as to Jabin, at the brook of Kison: Which perished at Endor: they became as dung for the earth. Make their nobles like Oreb, and like Zeeb: yea, all their princes as Zebah, and as Zalmunna: Who said, Let us take to ourselves the houses of God in possession. O my God, make them like a wheel; as the stubble before the wind. As the fire burneth a wood, and as the flame setteth the mountains on fire; So persecute them with thy tempest, and make them afraid with thy storm. Fill their faces with shame; that they may seek thy name, O LORD. Let them be confounded and troubled for ever; yea, let them be put to shame, and perish: That men may know that thou, whose name alone is Yahweh, art the most high over all the earth.(Psalm 83:9-18)

In the days of Asaph the wars of Saul from the era of the Judges merge into the wars of David as he establishes the kingdom of Israel. Those wars were existential, they were wars of the present tense as Asaph wrote. Asaph prayed and looked forward in the future – not to their utter destruction- but rather their defeat be a witness to the miraculous power of Yahweh.

David was helped to defeat all Israel's enemies. By the reign of Solomon where the kingdom was extended to a large territory all was quiet it would seem as if Asaph's prayer is answered. It would seem all is history.

There is one question - Surely Asaph knew the difference between Assyria (Ashur) and Syria (Aram)? The Jews themselves knew they had crossed over and come out of the land of Aram. I can find no reference to Israel facing a threat of any sort from Assyria in the days Asaph with King David reigning to about 1020BC. Assyria existed in the form of the very ancient Semetic city state of Assur near Nineveh. What is of interest is that it is known that in 1200-936BC that Assur maintained 'the best warriors in the world'

Assyrian kings during this period appear to have adopted a policy of maintaining and defending a compact, secure nation and satellite colonies immediately surrounding it, and interspersed this with sporadic punitive raids and invasions of neighbouring territories when the need arose, including campaigning as far as the Mediterranean and sacking Babylonia. Wikipedia

The Assyrians began empire building from 911BC after the time of Solomon, but may indeed have sent mercenaries, known to those of that era but not recorded for us. In any case Asaph made them into a song.

When later Hezekiah is facing being obliterated by Assyria he calls the Levites to sing Asaph's words, and Asaph's work as a seer is specifically mentioned.

Moreover Hezekiah the king and the princes commanded the Levites to sing praise unto the LORD with the words of David, and of Asaph the seer. And they sang praises with gladness, and they bowed their heads and worshipped. (2Chron. 29:30)

But this time of Hezekiah did not specifically fulfil Psalm 83, Ashur was not specifically confederate. Zidon was a snare and at one point during the era of the Judges oppressed Israel, but were the inhabitants of Tyre at any time known to be fighting Israel and known to be confederate with their enemies in ancient history? It may be the case, but it cannot be found. Tyre is condemned for pride (Isaiah 23:9).

Here we pause and consider that God's enemies make a tumult, take crafty counsel, consult saying come let us cut them off and have many words to say - but do nothing! It looks like Baalam and Moab's efforts and there is a deeper truth revealed in the list when we see that, considering the failure of Solomon and kings thereafter was marrying them. The focus of Psalm 83 is to put words in Israel's mouth to give Glory to the God of Israel, and to teach them who was God's enemy.