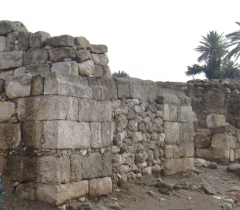 There has been much said about 'building bridges not walls'. But this idea has no resonance in the scripture. The word 'bridge' never appears. Which is very, very strange, as they certainly existed before and by the time of Christ.

The word 'gap' appears once and points to walls.

The people of the land have used oppression, and exercised robbery, and have vexed the poor and needy: yea, they have oppressed the stranger wrongfully. And I sought for a man among them, that should make up the hedge, and stand in the gap before me for the land, that I should not destroy it: but I found none. (Ezekiel 22:29-30)

There was no person to fill a gap, and to be a wall, between the people and God.

The Bible never speaks of bridges.

(gephura, 2 Macc 12:13): Does not occur in the canonical Script except in the proper name Geshur (2 Samuel 3:3; 13:37; 15:8; 1 Chronicles 2:23, others). The so-called Jacob's bridge is said to mark the site where Jacob crossed the upper Jordan on his return from Paddan-aram, does not date from the time of the patriarch. There are traces of ancient bridges across the Jordan in the vicinity of the Lake of Gennesaret, over the Arnon and over other rivers which enter the Jordan from the east; but none of them seem to date farther back than the Roman period. Nahum 2:6, in which the Chaldaic paraphrase renders "bridges," evidently refers to dikes or weirs. Judas Maccabeus is said to have planted a bridge in order to besiege the town of Casphor (2 Macc 12:13). Josephus (Ant., V, i, 3) tells us that the Jordan, before the passage of the Israelites, had never been bridged, evidently implying that in his own time bridges had been constructed over it, which was the case, under the Romans. The bridge connecting the temple with the upper part of the city of which Josephus speaks (War, VI, vi, 2; Ant, XV, xi, 5) probably was a viaduct. Frank E. Hirsch http://www.biblestudytools.com/dictionary/bridge/

Let us consider, the Jews who crossed the Jordan and lived both sides of it, never built a bridge? Why not? Why did it take the Romans to do it. Why did Jews accept the geography, but the Romans ride roughshod over it? It is possible that the Jews knew their God. After thinking on God's view, we might not be so keen on Roman bridges.

The God of the Bible likes dividing things.

God said, Let there be a firmament in the midst of the waters, and let it divide the waters from the waters. (Gen 1:6). And to rule over the day and over the night, and to divide the light from the darkness: and God saw that it was good. (Gen 1:18)

The significance of dividing light from darkness, is that we are asked also to do this also and to divide the 'light of the knowledge' of the Bible from the darkness of ignorance. The path of the just is as the shining light, that shines more and more unto the perfect day. The way of the wicked is as darkness: they know not at what they stumble.(Proverbs 4:18-19)

On the one instance when the people needed a bridge, instead of making a bridge, the God of Israel divided the sea to expose the land!

But lift thou up thy rod, and stretch out thine hand over the sea, and divide it: and the children of Israel shall go on dry ground through the midst of the sea.(Exodus 14:16)

There was no bridge offered as the sea was used to then divide Israelites from the Egyptians.

God caused the Division of Nations

God also was the root cause of the divisions in the world. At Babel he confused the language, deliberately, to prevent unity, and the result of divison.

Peleg; for in his days was the earth divided; (Gen 10:25) These are the families of the sons of Noah, after their generations, in their nations: and by these were the nations divided in the earth after the flood. (Gen 10:32)

There are a few basic language groups, and language has further divided, separate people into distinct nations. Even the sun and moon are set in place by God to 'divide' the heavens,

Lest thou lift up thine eyes unto heaven, and when thou see the sun, and the moon, and the stars, even all the host of heaven, should be driven to worship them, and serve them, which the LORD thy God has divided unto all nations under the whole heaven. (Deu 4:19)

The Most high divided the nations and their land, then divided off Israel and set bounds, or 'walls'.

When the most High divided to the nations their inheritance, when he separated the sons of Adam, he set the bounds of the people according to the number of the children of Israel. (Deu 32:8)

The world 'holy' means separate. God gave Israel laws to separate them from other people.

Ye shall be holy unto me: for I the LORD am holy, and have severed you from other people, that ye should be mine. (Lev 20:26)

The passage in Leviticus shows how God did not want his people Israel to be like the other nations, but to be divided from them, to be different. When they chose not to be God's and to attract the stranger to come to God's way, they were dispersed. When they chose to become one with the other nations about them they were sent among those nations, that they might learn and choose to be separate.

God caused enmity between his people and liars

When the serpent lied and deceived Eve, God said that he would put a natural enmity between the liars and his 'seed' his servants also called his 'children'

I will put enmity between thee and the woman, and between thy seed and her seed; it shall bruise thy head, and thou shalt bruise his heel.(Gen 3:15)

The Apostle Paul brings out the division, and total separation required.

For to be carnally minded is death; but to be spiritually minded is life and peace. Because the carnal mind is enmity against God: for it is not subject to the law of God, neither indeed can be. So then they that are in the flesh cannot please God. (Romans 8:6-8)

The Apostle James calls for division and separation.

Ye adulterers and adulteresses, know ye not that the friendship of the world is enmity with God? whosoever therefore will be a friend of the world is the enemy of God. (James 4:4)

The Holy God who has a natural enmity with those humans who have chosen to love their lies, calls on those who are his servants to choose, and to separate, themselves to join to Him.

For he is our peace, who hath made both one, and hath broken down the middle wall of partition between us; Having abolished in his flesh the enmity, even the law of commandments contained in ordinances; for to make in himself of twain one new man, so making peace; (Eph 2:14-15)

There is a wall of division caused by sin between God and humans. Those who seek to be at one with Christ and God, are divided from the rest of people, just as Israel was as a nation, chosen for the faith of their fathers, and divided from other nations whose ancestors sought out inventions.

A city without walls

They said unto me, The remnant that are left of the captivity there in the province are in great affliction and reproach: the wall of Jerusalem also is broken down, and the gates thereof are burned with fire. (Neh 1:3)

In the same way today a nation without strong borders may allow its enemy, and much evil to enter. The Bible in all instances shows the value of walls.

He that has no rule over his own spirit is like a city that is broken down, and without walls. (Pro 25:28)

It is no accident that it is the generation of the unruly who have no rule over their spirit who call for no wall, and no bounds. Paul warns Timothy of the generation who know no bounds being traitors and disobedient and who are 'unholy' (2Tim 3:2) 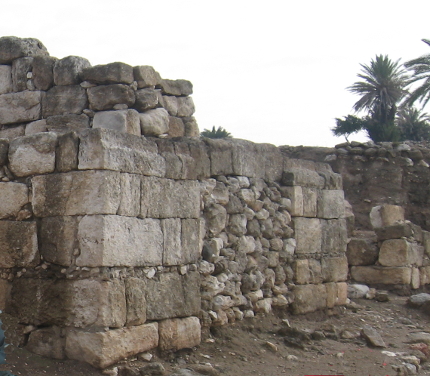 Jeremiah calls the God of Israel the 'wall' of Zion

Their heart cried unto the Lord, O wall of the daughter of Zion, let tears run down like a river day and night: give thyself no rest; let not the apple of thine eye cease. (Lam 2:18).

The reason he does this is that God is the only source of safety in a dangerous world.

I will both lay me down in peace, and sleep: for thou, LORD, only makest me dwell in safety. (Psa 4:8)

When the people of Jerusalem were building their wall, God points out to them that it was pointless, unless they had also sought the Creator who gave them all things and gave them the city by dividing the nations from Israel.

Ye have numbered the houses of Jerusalem, and the houses have ye broken down to fortify the wall. Ye made also a ditch between the two walls for the water of the old pool: but ye have not looked unto the maker thereof, neither had respect unto him that fashioned it long ago. (Isa 22:10-11)

The future will not be without walls, as the God of the Bible is a wall and loves walls.

Run, speak to this young man, saying, Jerusalem shall be inhabited as towns without walls for the multitude of men and cattle therein: For I, saith the LORD, will be unto her a wall of fire round about, and will be the glory in the midst of her. (Zechariah 2:4-5).

The future Jerusalem will have God as its defence salvation, or eternal life. And the giver of that wall of salvation is God.

In that day shall this song be sung in the land of Judah; We have a strong city; salvation will God appoint for walls and bulwarks. (Isaiah 26:1)

He carried me away in the spirit to a great and high mountain, and shewed me that great city, the holy Jerusalem, descending out of heaven from God, Having the glory of God: and her light was like unto a stone most precious, even like a jasper stone, clear as crystal; And had a wall great and high, and had twelve gates, and at the gates twelve angels, and names written thereon, which are the names of the twelve tribes of the children of Israel: (Rev 21:10-12)

The city of servants and those who chose to be the children of God' is separated from other cities made by humans, that turn to decay and therefore this city is Holy.

The temple of Ezekiel's prophecy speaks of a huge temple of 1.5km by 1.5km on the mountain of Jerusalem having walls with gates, including an inner area only for priests. The East gate of the outer wall is to be shut because the God of Israel will enter by it. Then said the LORD unto me;

This gate shall be shut, it shall not be opened, and no man shall enter in by it; because the LORD, the God of Israel, has entered in by it, therefore it shall be shut.(Ezekiel 44:2)

For more Babel, Diversity and the New World Order