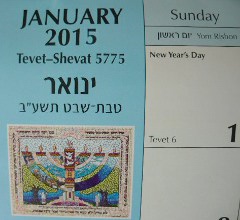 It is fitting at the beginning of the new calendar year to consider its origins. It doesn't match the Biblical new year, because the times were changed.

When Daniel spoke of the great power of Yahweh Elohim (He who will be Mighty Ones) the Hebrew God to Nebuchadnezzar, he said,

“He changes the times and the seasons: he removes kings, and sets up kings: he gives wisdom unto the wise, and knowledge to them that know understanding: (Daniel 2:21)

We see that God, having set the sun, moon, planets and stars in motion, reserves to himself the right to change the times and seasons. He set these in place. In addition he gave Israel a calendar, to live with those seasons he set in place.

When Israel was leaving Egypt, God set the calendar and the new years day.

This month shall be unto you the beginning of months: it shall be the first month of the year to you. (Exodus 12:2)

Also in the 7th month God commanded a special “head of the year”, Rosh Ha Shana,

Speak unto the children of Israel, saying, In the seventh month, in the first day of the month, shall you have a sabbath, a memorial of blowing of trumpets, an holy convocation. (Lev 23:24)

These are the days that the Holy One of the Bible appointed. In practice there was great wisdom in fixing the first month of new year to begin after the spring equinox, as that equinox could be used as an indicator to adjust the lunar calendar to the solar. The months were simply named by number until the exile of Jews to Babylon as the first month, second month and etc. There were 12 months with a 13th added to adjust the lunar months in relationship to the solar spring equinox.

A human changer of times

In Babylon Daniel speaks of a leadership that would arise from the break-up of 10 kingdoms from a 'beast' identified as Rome out of the Greek empire,

A 'time' is 360 years. The total time spoken of is therefore 360+ 360x2 + 360/2 = 1260 years. Daniel showed that we could identify the terrible leadership that he was speaking of, as God would allow that leadership to change times. It is well known now who adjusted the times of the new year. The calendars is named after them! We have in operation the prevailing calendar, so strong that even the Chinese celebrate its new year, which is called the Gregorian calendar. This was named after the leader of the tiny but powerful kingdom that introduced it on the 24 February 1582. This calendar replaced the Julian Calendar, named after Julius Caesar the leader of the powerful kingdom of Rome. In the wikipedia article it speaks of Julius' pontificate. Consider what Daniel said.

It may be noted that the Julian changes were introduced in 45BC, and were not adopted in Judea (wikipedia), though they must have known about them. The Roman calendar was pagan, and suited to the worship of the Roman gods.

The reason for the changes made in 1582 was to “bring the date for the celebration of Easter to the time of the year in which the First Council of Nicaea had agreed upon in 325.” The First Council was held at Easter tide. That remarkably is a span of 1257 years. 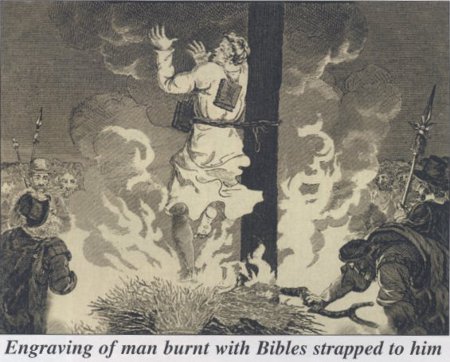 The full 1260 years date back to Eastertide 322, when the Roman wars began led to Constantine's victory under the labarum 'Chi-Rho' banner, which led to the Nicaean Council. “In 320, Licinius allegedly reneged on the religious freedom promised by the Edict of Milan in 313 and began to oppress Christians.” Wikipedia. This is the cause for Constantine to go forth in 324, and secure full power. More interesting perhaps is that in 322 Arius (Lybian born in Alexandria Egypt) is moved to write a poetic work that in 323 creates a storm, resulting in him being accused of heresy and being excommunicated in September. It is this controversy that led to the Nicaean Conference of 325, that also set the time of Easter (Latin: Pascha, Passover). In 325 we see the Roman based power changing God's times.

Let us consider that God had set the time of the Passover (in the first month) and it wasn't called 'Easter'. We can see and can know who Daniel spoke of, as can every generation since 325. It is said they would 'wear out' the true servants for all that time when they had power to change times. The changing of the times of the Passover was done twice, nearly 1260 years apart.

1582 in Politics & the ideal of conscience

The year 1582 saw political rumblings in England and Scotland that were part of a string events that would transform the western world, and remove the power of the changer of times to oppress. In August 1582 Scottish Presbyterian nobles Gowrie and Angus abducted the Scottish King James V1 who was feared pro-Catholic in an event called the Raid of Ruthven. William Ruthven 1st Earl of Gowrie led the nobles. They intended also to prevent the return of his mother the Catholic Mary Queen of Scots. The king was held by the lords for nearly a year and William Ruthven Earl of Gowrie formed an ultra-protestant reformation government. The Presbyterian Douglas family, including the Earl of Angus, returned from exile in Elizabethan England. Elizabeth 1, who might not otherwise have been so keen with dissent, supported Ruthven, Earl of Gowrie's government of earls. James V1 escaped the control of Ruthven in June. In 1584 Archibald Douglas, Earl of Angus and the men of his estate joined the rebellion of Mar and Glamis to unseat James V1. But this failed and they and their men fled to Berwick-upon-Tweed and then Newcastle-upon-Tyne. The raid of Ruthven strengthened reformation protestantism. William Douglas fled to La Rochelle, the protestant stronghold in France. This city supported the French Henry IV, who issued the Edict of Nantes for religious freedom for protestants in 1598. James V1 was forced to trim his career to finally inherit the throne of Queen Elizabeth 1. As king of England he sponsored the King James Version of the Bible.

From 1583 Newcastle on Tyne became a centre for the spread of Presbyterianism. The addition of these elements in Britain led to the growth of dissenting reformation protestantism and the ideal that we might choose to serve the God of the Bible according to truth and conscience. Anabaptists, Baptists and many independent congregations sprang up, in addition to Puritans. These fuelled the elements of dissent that had spread in England and Scotland with the open reading of the Tyndale Bible since 1538, and the ideas of the Polish Brethren from Europe. This environment led to the success of Oliver Cromwell in 1649, the English Act of Toleration of 1689, the American Declaration of Independence 1776 and finally, in England, the Unitarian Relief Act (Trinity Act) of 1813. There may therefore be some significance in the year 1582, which makes us wonder at the hand of Yahweh Elohim who 'seals their instruction' to 'hide pride from man'. (Job 33:16-17). For more on the 1260 years see Times Appointed. 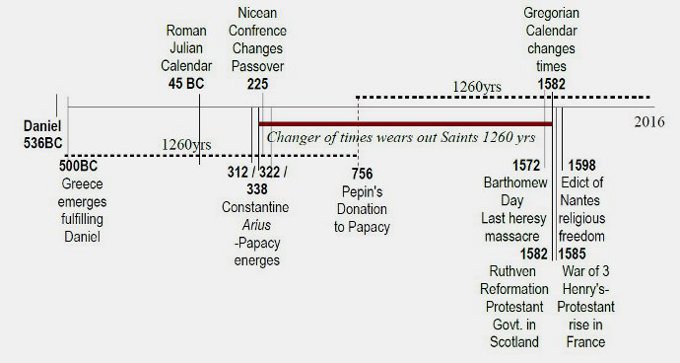 The last point regarding the Gregorian new year is that when it was adjusted in 1582 it was apparently to begin 8 days after Christmas, the reputed time of the circumcision of Christ (Wikipedia Gregorian calendar). Whereas Christ asked his followers to remember him in bread and wine, he never asked them to remember his birthday. In fact his birthday was not given to us in the Bible and cannot be worked out, except it can't have been in the cold of winter (December/January), as there were shepherds in the fields.

In pagan times North Western Europe seems to have a year that began with the winter Solstice (22nd or 23rd December), which matched well with the Roman Julian Calendar. Despite this, there appears to be some evidence that in England after the Norman Conquest from 1155 to 1751 that March 25 was New Year's day. March 25 is much closer to the God-given Hebrew Calendar being close to the Spring Equinox.

The true changer of times, and Creator, declared “the end from the beginning, and from ancient times the things that are not yet done, saying, My counsel shall stand, and I will do all my pleasure:” (Isaiah 46:10)