If you are not with the majority you are extreme 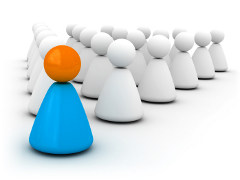 The American White house press secretary caused a stir by saying “When you are not with where a majority of Americans are, then you know, that is extreme, That is an extreme way of thinking." Yet all Christians know that majority are making a path - to hell.

“But this I confess unto thee, that after the way which they call heresy, so worship I the God of my fathers, believing all things which are written in the law and in the prophets..” (Acts 24:14)

There is no doubt whatsoever that Paul may (to the unbiased) seem to be extreme. Here he confessed to Felix that he worships as a 'Heretic', clearly not following the majority.

America was once thought a leading nation, but now due to idealogical backwardness of Godlessness and political divisions, its leaders speak words more fitting to repressive regimes. For many years the establishment of the orthodoxy of theories of evolution and climate change had darkened any creativity and learning in science. This was then followed by the darkness of orthodox political theory and the end of dissent. Now official leading opinion from the Biden Administration - where the President of America was oft labelled 'leader of the free world' - implies anything other than orthodoxy of belief on a political matter, is to be condemned as extreme.

This defies the principle of the Protestant Enlightenment that led to the founding of America – that all might seek and find the truth, and that all may be free to question all orthodoxy in every field seeking truth, because the choice of a way of life, faith and salvation was the matter of the individual.

The point I wish to make is that Christians need to be extreme to be with Christ. If we look about us and we agree with all about us, and, are going the same way as 'the many' are – Christ says we are going to certain destruction.

Enter ye in at the strait (narrow) gate: for wide is the gate, and broad is the way, that leads to destruction, and many there be which go in thereat: Because strait is the gate, and narrow is the way, which leads unto life, and few there be that find it. Beware of false prophets, which come to you in sheep's clothing, but inwardly they are ravening wolves. Ye shall know them by their fruits. Do men gather grapes of thorns, or figs of thistles? Even so every good tree bringeth forth good fruit; but a corrupt tree brings forth evil fruit. A good tree cannot bring forth evil fruit, neither can a corrupt tree bring forth good fruit. (Matthew 7:13-18)

The word for destruction indicates that the way itself is also destructive – a pernicious way, a way of ruin to the utter destruction of eternal death as unknowing dust.

Then said one unto him, “Lord, are there few that be saved? And he said unto them, Strive to enter in at the strait gate: for many, I say unto you, will seek to enter in, and shall not be able.” (Luke 13:23-24)

How few? – perhaps more than eight.

Which sometime were disobedient, when once the longsuffering of God waited in the days of Noah, while the ark was a preparing, wherein few, that is, eight souls were saved by water. (1Peter 3:20)

Despite popular belief that power resides in numbers, we are told it does not!

Asa cried unto the LORD his God, and said, “LORD, it is nothing with thee to help, whether with many, or with them that have no power: help us, O LORD our God; for we rest on thee, and in thy name we go against this multitude. O LORD, thou art our God; let not man prevail against thee.” (2Chron 14:11)

As Elijah who spoke to Christ on the mount of transfiguration was shown, there is power in the still small voice of the God of the Bible. When Elijah thought all the majority followed Baal and he was left a lone extremist, he was told seven thousand had not bowed to Baal. There is true power in being the extremist majority of the true Christian as God sees us and counts our number!

This is the word of the LORD unto Zerubbabel, saying, “Not by might, nor by power, but by my spirit, saith the LORD of hosts.” (Zechariah 4:6)