God made foolish the wisdom of the world 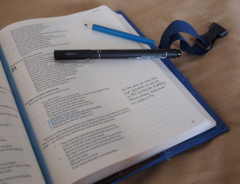 Before any can prove God does not exist they have to destroy, beyond doubt, the accusation of the Bible – they have to establish that the great God-rejecting ideas of the present and all time are not foolishness.

The Bible speaks of two classes of people: those of faith and 'the world' (aion, or age). The Apostle Paul observes that the great thinkers and leaders of his age, his own leaders, the great men he looked up to as a youth, had failed and been shown as fools. Nobody in the era of Paul or any time since until today would consider the Jewish thinkers and religious leaders who colluded to kill Christ were wise. The very success of the text of the Bible as a history of Christianity showed their personal failure. Such a famous event should have proved a warning to all those who may seek to kill dissidents to suppress their message. The great leaders of the Holy Roman Empire, Henry VIII and the bishops who sought the death of William Tyndale made a similar mistake. Tyndale's message was not suppressed, but rather spread and I have a facsimile copy of his work.

Paul makes generalisations about the intellectual currents of his era and how the central teachings of Christianity challenge conventional thinking.

For after that in the wisdom of God the world by wisdom knew not God, it pleased God by the foolishness of preaching to save them that believe. For the Jews require a sign, and the Greeks seek after wisdom: But we preach Christ crucified, unto the Jews a stumblingblock, and unto the Greeks foolishness; But unto them which are called, both Jews and Greeks, Christ the power of God, and the wisdom of God. (1 Corinthians 1:21-24)

How can they explain the trans-formative wisdom power of the preaching of 'Christ Crucified' in the past and present era? When asked by an Agnostic or an Atheist how anyone can be so foolish to believe in Christ, a Christian may simply point to their own original text that accuses the great philosophers of being made foolish.

Fundamentally any, even today 2000 years later, who seek to dismiss the truth of Christ are as foolish as those who sought to suppress the truth in Christ's day.

The absolute great wisdom of faith stands in the ever all-present power of God.

Paul is stating that the failure of the wise could be observed already in the nothingness of the dead ends of debates about Egyptian, Babylonian and Greek ideas. The leaders of this age who may seek to gain followers to their own ideas are defeated, as the end of the matter is that truth always prevails and any argument against truth always fails. Paul returns to his specific accusation which is still valid today.

Which none of the princes of this world knew: for had they known it, they would not have crucified the Lord of glory. (1Corintionas 2:8)

Let no man deceive himself. If any man among you seemeth to be wise in this world, let him become a fool, that he may be wise. For the wisdom of this world is foolishness with God. For it is written, He taketh the wise in their own craftiness. (1Corinthians 3:18-19)

We have been given in this 2,000 year old text, an age old principle from the book of Job. By the time of Paul the observation was already over 3,000 years old. We can find who is wise and who is a fool by the results of the working out of their own ways.

He disappointeth the devices of the crafty, so that their hands cannot perform their enterprise. He taketh the wise in their own craftiness: and the counsel of the froward is carried headlong. (Job 5:12-13)

If the great Agnostic and Atheist thinkers are so wise, why do their ideas lead to poor results and why are they so unhappy? They have to explain why their 'wisdom' in practice produces outcomes even the charitable might label 'foolishness'!

How wise are our leaders in the world today? We only have to see in our day the result of the advice of the 'wisest' that have the ears of the leaders of the world! Consider the era from Napoleon to the world wars to Vietnam to the current ill-advised war in Ukraine carried out by those who normally tout dialogue and diplomacy! In such a short time the results in suffering already show how foolish the current set of policies of all 'Western' leaders are! Where is the wisdom to rule with equity, with Justice and mercy?

In the end the great thinkers of every age who wish to reject the power of the God of the Bible are faced with huge obstacles. The Agnostics and Athiests have to find how they may argue that the world made itself – from nothing. Great ideas sometimes codified as theories, must not be confused with the documentation of repeatable observations of phenomena. The great thinkers of the world's ideas and makers of theories fail always in with new discoveries of the ever greater detail of the observed nature of things in the world (find me one great that has not)! Where is the full tale of human wisdom as observation yields even yet ever more examples of wonderful interdependence of all things?

He has made the earth by his power, he has established the world by his wisdom, and has stretched out the heavens by his discretion. (Jeremiah 10:12)