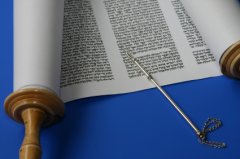 The account of the fate of Daniel's three friends and their experience when they were cast into the fiery furnace, presents an example of not only faith but of conviction. In every generation and for us today also, there would have been a need for conviction of the power and might of the Creator. The experience of Daniel's three friends gives us an insight into the elements that constitute the basis for faith and conviction. We are unlikely to face similar circumstances, to those which these men faced, in our lives but there are principles that give guidance to us all.

It would have been a far easier solution for the three men to have submitted to the decree of Nebuchadnezzar to bow before his golden image than to face the threat of a fiery death.

However, they had complete faith in Yahweh, the God of Israel. They knew that idolatry was a sin and disobedience to the commands of Yahweh. The nation of Israel was at that time being punished through the captivity that it was experiencing in Babylon. for its unfaithfulness.

Their conviction and trust in Yahweh had foundation. Daniel's three friends had had several faith building experiences. The prophets had long prophesied that the nation of Israel would go into captivity, many people would be destroyed, but a remnant would be saved. They had experienced being saved by being taken from their homeland and they would have recognised the fulfilment of the prophecies.

In the first year of his (Darius') reign I Daniel understood by books the number of the years, whereof the word of the LORD came to Jeremiah the prophet, that he would accomplish seventy years in the desolations of Jerusalem. (Daniel 9:2)

In Babylon the lives of Daniel and his three friends had been again threatened by the decree of Nebuchadnezzar to kill those of his wise men who could not tell him his dream. They had been saved when Daniel had prayed to Yahweh and been given the description and interpretation of Nebuchadnezzar's dream. In Daniel 2, Daniel confides in his three friends and asks their help in desiring and seeking the “mercies of the God of heaven concerning this secret;”

Then Daniel went in, and desired of the king that he would give him time, and that he would shew the king the interpretation. Then Daniel went to his house, and made the thing known to Hananiah, Mishael, and Azariah, his companions: That they would desire mercies of the God of heaven concerning this secret; that Daniel and his fellows should not perish with the rest of the wise men of Babylon.

Then was the secret revealed unto Daniel in a night vision. Then Daniel blessed the God of heaven. Daniel answered and said, Blessed be the name of God for ever and ever: for wisdom and might are his: (Daniel 2:16-20)

As a result of the revelation given to Daniel, Daniel became powerful in Nebuchadnezzar's court and ruler over the whole province of Babylon. Daniel also made a request for his three friends and Shadrach, Meshach, and Abed–nego were given positions over the affairs of provinces in the land as revealed in Daniel 2. Nebuchadnezzar was humbled at that time and also acknowledged the power of Israel's God.

Then the king Nebuchadnezzar fell upon his face, and worshipped Daniel, and commanded that they should offer an oblation and sweet odours unto him. The king answered unto Daniel, and said, Of a truth it is, that your God is a God of gods, and a Lord of kings, and a revealer of secrets, seeing you could reveal this secret.

Then the king made Daniel a great man, and gave him many great gifts, and made him ruler over the whole province of Babylon, and chief of the governors over all the wise men of Babylon. Then Daniel requested of the king, and he set Shadrach, Meshach, and Abed–nego, over the affairs of the province of Babylon: but Daniel sat in the gate of the king. (Daniel 2:46-49)

However Nebuchadnezzar soon forgot the mighty God of Israel and set up an image of gold to be worshipped by all the rulers of the provinces. Again the lives of Shadrach, Meshach, and Abed–nego were threatened.

Then an herald cried aloud, To you it is commanded, O people, nations, and languages, That at what time you hear the sound of the cornet, flute, harp, sackbut, psaltery, dulcimer, and all kinds of music, you fall down and worship the golden image that Nebuchadnezzar the king has set up:

And whoso falls not down and worships shall the same hour be cast into the midst of a burning fiery furnace. (Daniel 3:3-6)

Certain Chaldeans, who probably resented and were envious of the honours that had been given to these Jews from Israel, brought an accusation to king Nebuchadnezzar.

Thou, O king, hast made a decree, that every man that shall hear the sound of the cornet, flute, harp, sackbut, psaltery, and dulcimer, and all kinds of music, shall fall down and worship the golden image: And whoso falls not down and worships, that he should be cast into the midst of a burning fiery furnace. There are certain Jews whom thou hast set over the affairs of the province of Babylon, Shadrach, Meshach, and Abed–nego; these men, O king, have not regarded thee: they serve not thy gods, nor worship the golden image which thou hast set up. (Daniel 3:10-12)

The king was greatly angered by these messages and ordered that these men be cast into the fiery furnace that was to be heated even more than normal. These three men gave their reasons for their refusal to worship his image. They expressed their confidence in Yahweh's power and declared that they would not worship his gods or the image he had set up.

Shadrach, Meshach, and Abed–nego, answered and said to the king, O Nebuchadnezzar, we are not careful to answer thee in this matter. If it be so, our God whom we serve is able to deliver us from the burning fiery furnace, and he will deliver us out of thine hand, O king.

But if not, be it known unto thee, O king, that we will not serve thy gods, nor worship the golden image which thou hast set up .(Daniel 3:16-18)

Nebuchadnezzar was so angry that he ordered that these three men be cast immediately into the fiery furnace. But there was an amazing outcome.

Then Nebuchadnezzar the king was astonished, and rose up in haste, and spoke, and said unto his counsellors, Did not we cast three men bound into the midst of the fire? They answered and said unto the king, True, O king. He answered and said, Lo, I see four men loose, walking in the midst of the fire, and they have no hurt; and the form of the fourth is like the Son of God. Then Nebuchadnezzar came near to the mouth of the burning fiery furnace, and spake, and said, Shadrach, Meshach, and Abed–nego, ye servants of the most high God, come forth, and come hither. Then Shadrach, Meshach, and Abed–nego, came forth of the midst of the fire. And the princes, governors, and captains, and the king's counsellors, being gathered together, saw these men, upon whose bodies the fire had no power, nor was an hair of their head singed, neither were their coats changed, nor the smell of fire had passed on them.

We have here an acknowledgement by Nebuchadnezzar of the power of Daniel's and his three fiends' God. He also commands that nothing was to be spoken against their God.

This is an event recorded in the pages of the scriptures that many children very early in life learn about. It is an event that adults can gain a great deal of encouragement from and a guide to what elements can create a faith in the power of Yahweh.

Faith and conviction do not come from just feelings. There are several things that must contribute to the development of faith. Daniel's three friends had been exposed to a number of experiences that helped their trust and faith to grow.

They had access to the writings of Moses, the Psalms and the Prophets. The written word was available and was a source of instruction.

They had seen the idolatry of their nation and their rebellion against Yahweh's laws and the subsequent results of the nation of Israel's disobedience and rejection of their God.

They would have witnessed and heard the warnings of the contemporary prophets.

They experienced the captivity of their nation which had fulfilled the words of the prophets.

They were involved in Daniel's interpretation of Nebuchadnezzar's dream. Together with Daniel they had sought in prayer the help of Yahweh. They had witnessed the revelation of the meaning of the dream, which was given to Daniel in a night vision.

Following this experience they had been granted privileges in Babylon despite being captives of the King of Babylon.

NEXT PAGE... Strengthen Faith and be Convinced
Pages: 1 2