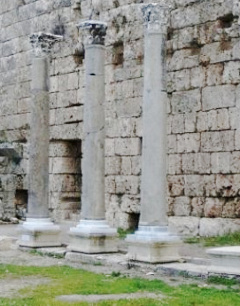 Luke the writer to the acts, who at one point without explanation launches into the use of the word 'we' indicating he was writing as an eye witness, mentions Cilicia 7 times. The first time Luke mentions it, on reflection, might seem peculiar.

Then there arose certain of the synagogue, which is called the synagogue of the Libertines, and Cyrenians, and Alexandrians, and of them of Cilicia and of Asia, disputing with Stephen.
(Acts 6:9)

It is sightly peculiar as Cilicia is in Asia Minor. Luke could have left it out and just written Asia, but he didn't as he knew something about who the disputers with Stephen that were from Cilicia. Luke doesn't tell us why he wrote Cilicia, we can work it out.

I'll show you: let us put 2 facts together.

In Acts 21 Luke records Paul said to the chief captain, “I am a man which am a Jew of Tarsus, a city in Cilicia, a citizen of no mean (small) city: and, I beseech thee, suffer me to speak unto the people. (Acts 21:39)

To know this Luke must have either been there or to have heard it from Paul. Paul then gives a speech in Hebrew to the people of Jerusalem, “

I am verily a man which am a Jew, born in Tarsus, a city in Cilicia, yet brought up in this city at the feet of Gamaliel, and taught according to the perfect manner of the law of the fathers, and was zealous toward God, as ye all are this day. And I persecuted this way unto the death, binding and delivering into prisons both men and women. (Acts 22:3-4)

Previously in recording the events where Paul was 'zealous', Luke explains that Paul (then called Saul) received the clothes of those who stone Stephen

Then they cried out with a loud voice, and stopped their ears, and ran upon him with one accord, And cast him out of the city, and stoned him: and the witnesses laid down their clothes at a young man's feet, whose name was Saul. And they stoned Stephen, calling upon God, and saying, Lord Jesus, receive my spirit. (Act 7:57-59)

“And when the blood of thy martyr Stephen was shed, I also was standing by, and consenting unto his death, and kept the raiment of them that slew him.” (Acts 22:20)

People do not give their valuable cloaks to perfect strangers. Paul also witnesses he was consenting to the death of Stephen. Paul is confessing he personally was involved in the dispute with Stephen. But we can know this as Luke specifically mentions those of Cilicia, where Saul / Paul was from.

Paul was taught by Gamaliel, but we know also that Gamaliel was not the source of Saul's desire to persecute 'the Way', as it was then known. Luke witnesses that Gamaliel while not supportive was clearly not against the Way, as he refused to countenance the death of Peter and John.

Then stood there up one in the council, a Pharisee, named Gamaliel, a doctor of the law, had in reputation among all the people, and commanded to put the apostles forth a little space; And said unto them, “Ye men of Israel, take heed to yourselves what ye intend to do as touching these men.” (Acts 5:34-35).

If Gamaliel was willing to sit and wait and not harm the Apostles, he wouldn't have supported the killing of Stephen. Gamaliel is not the reason Saul was inspired to gather with those who argued with Stephen. Luke doesn't explain it at all, but it does make a lot of sense that the young Saul in seeking to kill Stephen was following, not his teacher, but others, possibly contemporaries, he knew very well from his home town in Cilicia.

Luke doesn't explain, we put the bits of the report together.

When we remember that Paul was from Cilicia, a few more things make sense. In Galations Paul explains,

Neither went I up to Jerusalem to them which were apostles before me; but I went into Arabia, and returned again unto Damascus. Then after three years I went up to Jerusalem to see Peter, and abode with him fifteen days. But other of the apostles saw I none, save James the Lord's brother. Now the things which I write unto you, behold, before God, I lie not. Afterwards I came into the regions of Syria and Cilicia; And was unknown by face unto the churches of Judaea which were in Christ: But they had heard only, That he which persecuted us in times past now preacheth the faith which once he destroyed. And they glorified God in me. (Gal 1:17-24)

We see from Paul's letter to the Galations that Cilicia, who knew Paul well, was convinced early in Paul's ministry. They knew Paul and knew his persecution, and knew that there could only be something amazing to change Paul. They therefore followed Paul, and glorified God.

Nothing more is said of Cilicia by Luke until we learn with some surprise that the Apostles are writing to believers in the Way already in Cilicia,

They wrote letters by them after this manner; The apostles and elders and brethren send greeting unto the brethren which are of the Gentiles in Antioch and Syria and Cilicia: (Acts 15:23)

Then later when Barnabas and Paul split up, Paul heads right back into Cilica, where there were already congregations

And the contention was so sharp between them, that they departed asunder one from the other: and so Barnabas took Mark, and sailed unto Cyprus; And Paul chose Silas, and departed, being recommended by the brethren unto the grace of God. And he went through Syria and Cilicia, confirming the churches. (Acts 15:39-41)

Luke likes the detail of law and judgement and notes the almost irrelevant detail that Cilica came up when Paul is accused.

When the governor had read the letter, he asked of what province he was. And when he understood that he was of Cilicia; I will hear thee, said he, when thine accusers are also come. And he commanded him to be kept in Herod's judgment hall. (Acts 23:35)

But at no point does Luke explain that Paul's city of origin is a reason there are congregations in Cilicia early. Saul who became Paul, even as a young man, was not merely holding the coats of the cohort of Jews from Cilicia but it seems he was influential among them. If we may wonder how Paul learned the gospel we need know nothing more than that he was arguing with Stephen, and could not prevail. He was at the very least taught by Stephen.

They (of Cilica et al) were not able to resist the wisdom and the spirit by which he (Stephen) spake. Then they suborned men, which said, We have heard him speak blasphemous words against Moses, and against God. (Acts 6:10-11)

In this we see why Saul was holding the coats, as the accusers of Stephen weren't even those arguing with him, but men who were bought or bribed. How central was Saul's role in the death of Stephen? Luke says those arguing with Stephen included those from Cilicia, Paul said he was consenting to his death, and Luke uses the same word. The Greek also implies 'to have pleasure in' which may, in the circumstances, be understood to indicate that Saul was a co-conspirator. We might even think a leading conspirator, for Luke goes on to say,

“As for Saul, he made havock of the church, entering into every house, and haling men and women committed them to prison.” (Acts 8:3)

Luke doesn't record that any other than Saul was causing problems.

Saul, yet breathing out threatenings and slaughter against the disciples of the Lord, went unto the high priest, And desired of him letters to Damascus to the synagogues, that if he found any of this Way, whether they were men or women, he might bring them bound unto Jerusalem. And as he journeyed, he came near Damascus: and suddenly there shined round about him a light from heaven: And he fell to the earth, and heard a voice saying unto him, Saul, Saul, why persecutest thou me? And he said, Who art thou, Lord? And the Lord said, I am Jesus whom thou persecutest: it is hard for thee to kick against the pricks. (Act 9:1-5)

Saul's leading role in stoning Stephen was demonstrated in that after his conversion it is written by Luke,

Then had the congregations rest throughout all Judaea and Galilee and Samaria, and were edified; and walking in the fear of the Lord, and in the comfort of the Holy Ghost, were multiplied.(Acts 9:31)

They were multiplied because astoundingly a leader of those most against the way, had swapped sides to be even worse than Stephen. Suddenly. Luke actually tells us why. The Cilicians, of whom Paul was a young leader, were beaten in logic by Stephen. Saul wouldn't admit he'd been defeated by Stephen, until he was told by a risen Y'shua he couldn't win, as he was kicking against something unyielding: the truth.

When people set out to write about the Bible they often make little reference to what is written in the Bible itself. They try to express what the Bible is saying in their own words and often end up confusing their readers. The Apostle Paul has very definite views on how to teach people to understand the Bible and he demonstrates this in his writings very clearly.