1) A Maimed and Contrite spirit 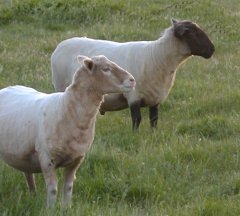 The great exemplar of our Lord, shows that great things are required of those to whom much is given. The scriptures seem to indicate that the scars from the crucifixion will be evident in the kingdom. Paul was given a great gift to write much of the New Testament, yet was given a 'thorn in the flesh'. When he asked for it to be be removed he was told that God's grace was sufficient for him. His life in Christ left physical marks on him, from stoning, a memorial to Stephen, whom he had stoned, and also to his subsequent walk in Stephen's steps. It is as if great privilege might come with a high cost. One example that few might consider is that of Jacob's limp.

Whereas, Isaac lives a relatively uneventful life until Jacob grows up, his son Jacob's life from adulthood is one of trial. There is so much trial that Jacob without any irony or self pity says late in life, unto Pharaoh,

He may have called the days 'evil' as at the time he had only just been re-united with a beloved son, long thought dead. His father Isaac had lived to 180. Jacob's life took him into exile twice and had taken a very different course to Isaac's life which was in the land. Yet the 'evil days' of Jacob's life were given a very special commendation as an encouragement to every person who has sought to serve God. The inspired psalmist wrote,

Happy is he that has the God of Jacob for his help, whose hope is in the LORD his God: (Psalm 146:5)

The God of Jacob

Only Jacob is mentioned. Of all the faithful servants who had lived to the time of king David, Jacob is remembered. The Mighty One of the Universe and of Armies, who formed the ear and eye, was pleased to be called the God of the man Jacob.

Yet they say, The LORD shall not see, neither shall the God of Jacob regard it. Understand, ye brutish among the people: and ye fools, when will ye be wise? He that planted the ear, shall he not hear? he that formed the eye, shall he not see? (Psa 94:7-9)

The psalmist is not alone. Though all the fathers are precious, and the promises sure, Jacob is singled out when Yahweh speaks to his people,

And I will give thee the treasures of darkness, and hidden riches of secret places, that thou may know that I, the LORD, which call thee by thy name, am the God of Israel. For Jacob my servant's sake, and Israel mine elect, I have even called thee by thy name: I have surnamed thee, though thou hast not known me. (Isaiah 45:3-4)

We can confirm Isaiah is speaking of the man Jacob, rather than the nation, as Jacob was called the name 'Israel' by God. When speaking of the 'God of Israel', Israel seems to refer to the father of the nation. The nation is most often called the 'children of Israel.' In addition Yeshua proves this point as when he referred to the God of Jacob, it meant the God of the man Jacob,

Jesus makes the point that he is the God of living because Jacob's resurrection to life eternal is sure. It was given as an unconditional promise when he went down into Egypt. Jacob was told would be brought up again to live in the land.

We have also remarkable testimony regarding Jacob in the book of Malachi,

I have loved you, saith the LORD. Yet ye say, Wherein hast thou loved us? Was not Esau Jacob's brother? saith the LORD: yet I loved Jacob, (Malachi 1:2)

It is beyond the scope of the article to ponder why Jacob was so beloved by God. The point is established that he was so loved. Jacob's life was an example of how God helps people and is a refuge for them.

God is in the midst of her; she shall not be moved: God shall help her, and that right early. The heathen raged, the kingdoms were moved: he uttered his voice, the earth melted. The LORD of hosts is with us; the God of Jacob is our refuge. Selah. (Psa 46:5-7)