The great day of Jezreel 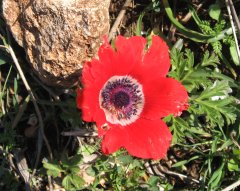 Jezreel is first listed a place of Judah (Joshua 15:56). This is clearly in the territory of Judah and not to be confused with the more famous place named Jezreel in the Jezreel Valley.

The first mention of 'the valley of Jezreel' is also in Joshua, and the context in relationship to chariots is noted.

Jezreel means 'God shall sow', and it would make sense that the verdant valley in Northern Israel would be named for sowing. The place called Jezreel in the valley of Jezreel is on a rise in the midst of the fertile valley of Jezreel (see picture). In addition the site of the old city even today has abundant water, and is close to an area abundant in natural springs. All the blue on the map is modern water storage following the ancient river path. The area today is full of fields with crops. Due to its large open flatness, “in Hebrew the Jezreel Valley is often referred to simply as “Ha’emek - The Valley”” (http://www.jewishvirtuallibrary.org/jsource/Society_&_Culture/geo/Jezreel.html)

Today the specific place Jezreel is of little importance, strategic or otherwise. They also note that Megido is even less important.

Yizre’el is no longer a city, but rather a kibbutz established by demobilized Palmach soldiers in 1948. And the Megiddo of today is a tel that is home to a hoard of archaeological ruins. http://www.jewishvirtuallibrary.org/jsource/Society_&_Culture/geo/Jezreel.html

The only strategic value is the valley being on the route from Egypt to Mesopotamia. “The importance of the valley in terms of transportation continues to this day, as many trucks from Amman, Jordan travel through it on their way the port of Haifa”( Jewish virtual library source as above). We will return to this, after considering the days of Jezreel.

A day of Jezreel: Gideon

The Israelites when they entered the Holy land had no chariots, and were discouraged from relying on them. For the most part, the hilly terrain of the mountains of Israel meant that they were of no use. When Israel took the land, there is no record they fought the Canaanites in the valley Jezreel, and yet the Canaanite people were destroyed and displaced. This shows the difficulties faced by those adhering to conventional warfare in Israel. Despite modern weapons, conquest is still reliant on taking strong cities.

It seems the Midainites and Amakekites forgot the problems of relying on chariots. In areas with level plains, chariots might be very useful. After Gideon had destroyed the idolatrous grove, the Midianites put on a show of force.

Then all the Midianites and the Amalekites and the children of the east were gathered together, and went over, and pitched in the valley of Jezreel. (Judges 6:33)

From beside the hill of Moreh, Gideon and a mere 300 men in the hours of darkness cause fright through the camp,

And the three hundred blew the trumpets, and the LORD set every man's sword against his fellow, even throughout all the host: and the host fled to Bethshittah in Zererath, and to the border of Abelmeholah, unto Tabbath. (Judges 7:22)

This victory in the valley of Jezreel led to Gideon giving authority to Yahweh only.

A day of Jezreel: David & Saul

When the Philistines gathered to take on Israel's king, Saul, they went up to Aphek. Saul's forces camped by a fountain in Jezreel (1 Sam 29:1). David was providentially sent back by the Philistines, but Saul was slain that day. It was said specifically the news of his death come from Jezreel. The news led to Jonathan's son being made lame.

And Jonathan, Saul's son, had a son that was lame of his feet. He was five years old when the tidings came of Saul and Jonathan out of Jezreel, and his nurse took him up, and fled: and it came to pass, as she made haste to flee, that he fell, and became lame. And his name was Mephibosheth. (2Samuel 4:4)

Jezreel was one of the places of the kingdom of Saul's son.

But Abner the son of Ner, captain of Saul's host, took Ishbosheth the son of Saul, and brought him over to Mahanaim; And made him king over Gilead, and over the Ashurites, and over Jezreel, and over Ephraim, and over Benjamin, and over all Israel. (2 Samuel 2:8-9)

A day of Jezreel: Elijah

Jezreel featured when at Mt Carmel Elijah proved before the people of Israel and Ahab their King that Yahweh was the only Power of heaven. After 3 years of drought Yahweh sent rain and it was enough rain to bog down Ahab's iron chariot,

It came to pass at the seventh time, that he (the servant said) said, “Behold, there arises a little cloud out of the sea, like a man's hand.”

And he (Elijah) said, “Go up, say unto Ahab, Prepare thy chariot, and get thee down, that the rain stop thee not.”

And it came to pass in the mean while, that the heaven was black with clouds and wind, and there was a great rain. And Ahab rode, and went to Jezreel. And the hand of the LORD was on Elijah; and he girded up his loins, and ran before Ahab to the entrance of Jezreel. (1Kings 18:44-46)

A day of Jezreel: Ahab

When Ahab coveted Naboth the Jezreelite's vineyard, Jezebel killed to obtain it. Elijah comes to Ahab,

And Ahab said to Elijah, Hast thou found me, O mine enemy? And he answered, I have found thee: because thou hast sold thyself to work evil in the sight of the LORD. Behold, I will bring evil upon thee, and will take away thy posterity..And will make thine house like the house of Jeroboam the son of Nebat, and like the house of Baasha the son of Ahijah, for the provocation wherewith thou hast provoked me to anger, and made Israel to sin. And of Jezebel also spake the LORD, saying, The dogs shall eat Jezebel by the wall of Jezreel. (1Ki 21:20-23)

Jehu executes this judgement at Jezreel, riding a chariot,

So Jehu rode in a chariot, and went to Jezreel; for Joram lay there. And Ahaziah king of Judah was come down to see Joram. (2Ki 9:16)

And Joram the son of Ahab is struck by Jehu's arrow in his chariot at Jezreel,

And Joram said, Make ready. And his chariot was made ready. And Joram king of Israel and Ahaziah king of Judah went out, each in his chariot, and they went out against Jehu, and met him in the portion of Naboth the Jezreelite. And it came to pass, when Joram saw Jehu, that he said, Is it peace, Jehu? And he answered, What peace, so long as the whoredoms of thy mother Jezebel and her witchcrafts are so many? And Joram turned his hands, and fled, and said to Ahaziah, There is treachery, O Ahaziah. And Jehu drew a bow with his full strength, and smote Jehoram between his arms, and the arrow went out at his heart, and he sunk down in his chariot. (2Kings 9:21-24)

And the destruction of Ahaziah was of God by coming to Joram: for when he was come, he went out with Jehoram against Jehu the son of Nimshi, whom the LORD had anointed to cut off the house of Ahab. (2Chronicles 22:7)

Then afterwards hearing of the dogs having eaten Jezebel, Jehu says

This is the word of the LORD, which he spake by his servant Elijah the Tishbite, saying, In the portion of Jezreel shall dogs eat the flesh of Jezebel: (2Kings 9:36)

Jezreel was the place of the judgement of the house of Ahab. Jehu from there sent a letter to slay all Ahab's sons, and there slew all that had supported Ahab (2 kings).