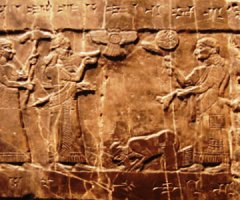 We have two records, two witnesses, regarding Ahaziah's life.

(2Kings 8:26) Twenty and two years old Ahaziah when he began to reign; and he reigned one year in Jerusalem. His mother's name was Athaliah daughter of Omri king of Israel.

(2Chronicles 22:2) Forty and two years old Ahaziah when he began to reign, and he reigned one year in Jerusalem. His mother's name was Athaliah daughter of Omri.

These appear contradictory. Opponents of the Bible may say here is a case of an error. But there is strong evidence in the situation and events that this is not a scribe's error. The text in Hebrew is identical as if copied except for forty and twenty, and in Hebrew 'forty' (ארבעים) cannot be mistaken for 'twenty' (עשׂרים).

If it is assumed the scribes both meant what they wrote, a logical explanation emerges. As we will show there can be no mistake as to how old Ahaziah was, not only do all the other details of the record itself confirm it, but everyone of that era and subsequent generations must have known it. That they must have known, in the historical context, is a powerful argument that this may be the scribe's political comment, that the God of Israel was happy the scribe made. Because it appears that Ahaziah never really reigned at all, even for a year, but rather was subject to those who held the real power. And the fact that there were two records allowed the events to be told in two ways.

Let us graphically sort out how old Ahaziah was when he was made king from the Bible record. There is a lot of evidence which fits together. 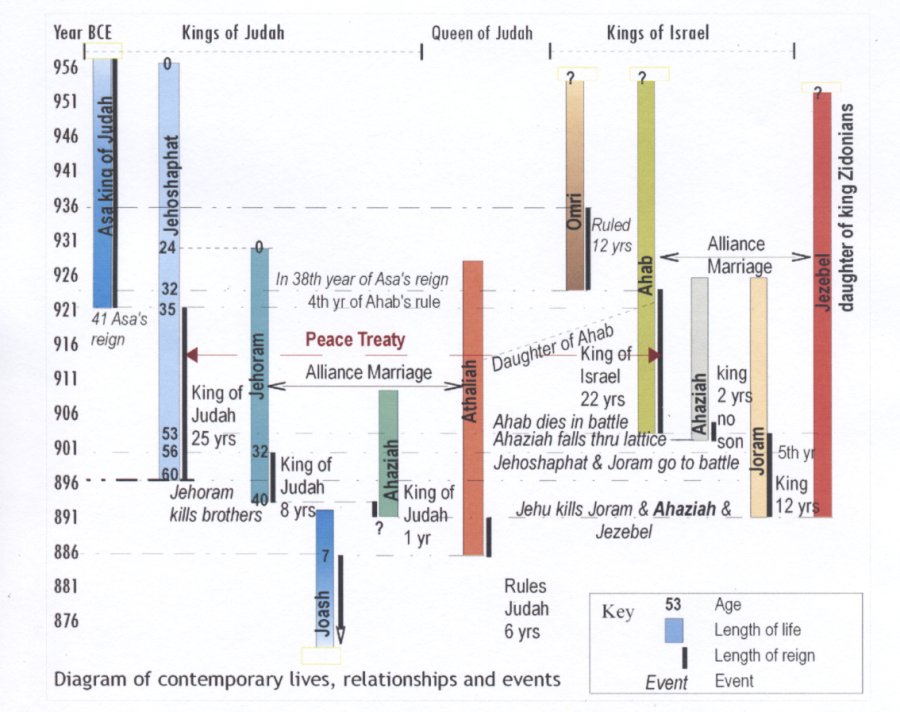 Ahaziah was the son of Jehoram and grandson of Jehoshaphat kings of Judah. Jehoram began his reign co-regent with his father, Jehoshaphat. Jehoram was married to Athaliah the daughter of Ahab (who was son of Omri the famous king of Israel).

(17) Thirty and two years old was he when he began to reign; and he reigned eight years in Jerusalem.

(18) And he walked in the way of the kings of Israel, as did the house of Ahab: for the daughter of Ahab was his wife: and he did evil in the sight of the LORD.

We learn it was in the 5th year of Joram that Jehoram became co-regent with his father Jehoshaphat. This means their reigns overlapped for 4 years. This makes sense when we learn Jehoshaphat and Joram both went together to battle with the kings of Edom about that time (2 Kings 3), allowing Jehoram to rule while Jehoshaphat was away.

The key to understanding how old Ahaziah was when he began to reign, is in the lives of Jehoshaphat and Ahab, his two grandfathers, and the role of his father Jehoram and mother Athaliah. The record of the kings of Judah gives their ages, which often cross-check, which is very useful.

There was some footage placed on U-tube of 6 IDF soldiers dancing as a group on duty in Hebron, more often the scene of warfare as the city is a point of tension in Israel. It was swiftly taken down and the implication was that they would face discipline. If it is not considered good form that soldiers dance on duty, what would the world think of an army who goes into battle singing a love song? Which army? An army of Israel of course.