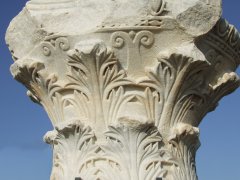 The Acanthus was and is evident as the decoration of the capital of Corinthian columns, might be found in frieze decorations in classical style buildings, but is most evident in the modern world in curtain fabrics, upholstery and clothing. But the opulent Greek pattern has a meaning.

In a commentary a Rabbi gave an overview of two core influences of 'western culture',

The West was shaped by two profoundly different civilizations, brought together in creative tension by Christianity. One was ancient Greece, the other ancient Israel: Hebraism and Hellenism as Matthew Arnold called them. Each gave us a political value but they were not the same. The Hebrew Bible gave us the idea we call civil rights. ...To the Greeks we owe a different value, that of democracy,.. rule by the majority israelnationalnews.com/Articles/Article.aspx/10099

It is to be noted that Hebraism and Hellenism were 'not the same' and 'profoundly different'. They were so different as to engender mutual antipathy and the rise of the Macabees. So how did they become reconciled in the Western culture? What precisely is this 'creative tension' in Christianity?

The Acanthus decoration will show how and why.

The word acanthus is from Greek from ake "point, thorn" and anthos "flower" dictionary.reference.com/browse/acanthus, which accurately describes the thorn covered leaves as a “thorny flower.”

The meaning of Acanthus 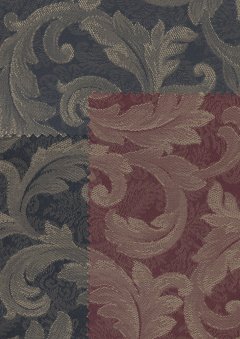 The third order, called Corinthian, is an imitation of the slenderness of a maiden; for the outlines and limbs of maidens, being more slender on account of their tender years, admit of prettier effects in the way of adornment.

9. It is related that the original discovery of this form of capital was as follows. A free-born maiden of Corinth, just of marriageable age, was attacked by an illness and passed away. After her burial, her nurse, collecting a few little things which used to give the girl pleasure while she was alive, put them in a basket, carried it to the tomb, and laid it on top thereof, covering it with a roof-tile so that the things might last longer in the open air. This basket happened to be placed just above the root of an acanthus. The acanthus root, pressed down meanwhile though it was by the weight, when springtime came round put forth leaves and stalks in the middle, and the stalks, growing up along the sides of the basket, and pressed out by the corners of the tile through the compulsion of its weight, were forced to bend into volutes at the outer edges.

10. Just then Callimachus, whom the Athenians called [Greek: katatêxitechnos] for the refinement and delicacy of his artistic work, passed by this tomb and observed the basket with the tender young leaves growing round it. Delighted with the novel style and form, he built some columns after that pattern for the Corinthians, determined their symmetrical proportions, and established from that time forth the rules to be followed in finished works of the Corinthian order. Book IV Chapter 1

The story's veracity is doubtful, but nevertheless this explains what Romans thought and why they valued the acanthus design.

The original use in the temple designed for Apollo in Corinth reveals a further connection. The name Apollo originally meant 'to destroy'. The following quote shows Apollo means destroyer as 'Abaddon' also means 'destroyer'

They had a king over them, which is the messenger of the bottomless pit, whose name in the Hebrew tongue is Abaddon, but in the Greek tongue has his name Apollyon. (Rev 9:11).

Apollo came also to be thought of as 'a healer'

Acanthus Leaves Is a medicinal plant associated with Apollo and his healing abilities. The curling leaves of the acanthus became the main element of the Corinthian capital. It can be seen today not only in Greece and Rome on Temples, but on our own U.S. Post Offices, libraries and any number of Greek Revival buildings of the nineteenth century. www.solnyc.com/

But to the Pagan Romans Apollo meant 'light' and then he was transformed into a sun deity by the Celts.

Although many variants of the style are known, the principal component was the acanthus leaf, symbol of death and rebirth.... Being an herbaceous plant, the acanthus is an ideal symbol of regeneration. humanflowerproject.com

By extension regeneration, and cyclical regrowth came to mean immortality. The Romans so loved the Corinthian order and its meaning they invented a new composite order which was used in the Arch of Titus of 82 CE. This should give all Christians pause as this arch also includes the pagan Roman triumph over Jerusalem in 70CE. 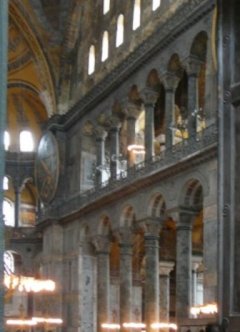 From its use in Roman design the thoroughly pagan symbol was imported as a symbol into state run Christianity when it inherited the Roman world as the Byzantine style continued the use of the formerly pagan design.

The symbolism and meaning associated with the Acanthus is that of enduring life, and the plant is traditionally displayed at funerary celebrations.

"In Greece 2 BC the acanthus was a clear reference to life emerging from a grave. It was not initially a reference to resurrection in Christian sense, but in a sense that life is cyclical." - Gus Tassara, "Plant Symbolism" buffaloah