If you were asked where Deity dwells, would you point up to the heavens?

If the creator of all the universe exists in the great expanse of the heavens, we may come to think that Deity is at a great distance from us.

Have you ever paused and considered that the heavens touch the earth? Water was divided, part became water, part atmosphere.

God said, Let there be an expanse in the midst of the waters, and let it divide the waters from the waters...and it was so. And God called the expanse Heaven. (Gen 1:6-8)

Heaven is the atmosphere. 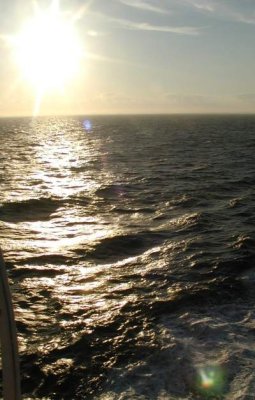 Also Yahweh declares that his feet rest on the earth.

Thus says the LORD, The heaven is my throne, and the earth is my footstool: where is the house that ye build unto me? and where is the place of my rest? (Isaiah 66:1)

We could be in the deepest place on the face of the earth, but the air that touches our hands and face is the beginning of the expanse that is space. We touch heaven.

Yahweh says the whole earth is his footstool. But Yahweh has a favoured place to rest his feet. He first dwelt on earth in the tabernacle.

There I will meet with the children of Israel, and the tabernacle shall be sanctified by my glory. And I will sanctify the tabernacle of the congregation, and the altar..

David says that the building Solomon was to build was a footstool.

Then David the king.. said, As for me, I had in mine heart to build an house of rest for the ark of the covenant of the LORD, and for the footstool of our God: (1Chronicles 28:2 )

Sing praises to the LORD, which dwells in Zion: declare among the people his doings. (Psalm 9:11)

Even though the dwelling of Yahweh is in the house, He lives there to be close to those who are humble.

For thus says the high and lofty One that inhabits eternity, whose name is Holy; I dwell in the high and holy place, with him also that is of a contrite and humble spirit, to revive the spirit of the humble, and to revive the heart of the contrite ones. (Isaiah 57:15)

How close? Genesis says Yahweh Elohim can walk on the earth with us.

And they heard the voice of the LORD God walking in the garden in the cool of the day:

and Adam and his wife hid themselves from the presence of the LORD God amongst the trees of the garden. (Gen 3:8)

Though we may not see him, we are asked to walk with Yahweh.

He has showed you, O man, what is good; and what doth the LORD require of you, but to do justly, and to love mercy, and to walk humbly with your God? (Micah 6:8)

We walk with Yahweh on the earth in day to day tasks, by seeking Him and not our own way, in reading his word, in prayer and in obedient actions. The implication is then that Yahweh will walk with us. Certainly there are Angels sent to walk the earth.

And the man that stood among the myrtle trees answered and said, These are they whom the LORD has sent to walk to and fro through the earth. (Zechariah 1:10)

Hanani the seer tells Asa, and us how close Yahweh is,

For the eyes of the LORD run to and fro throughout the whole earth, to show himself strong in the behalf of them whose heart is perfect toward him. (2Chronicles 16:9)

We do not know just how close Yahweh Elohim may be to us. One of the Elohim (angels) may be clsoe enough to touch us. Also it is logical, as the heaven was divided in Genesis, that it reaches down to rest on the earth. When we put our hands out in prayer, with palms facing up, the tips of our fingers touch heaven.